Tim Tszyu says he’s expecting a calm and collected performance from his younger brother Nikita, as the Tszyu name will once again be up in lights in Newcastle.

Nikita fought his professional debut back in March, with a second-round TKO over Aaron Stahl.

He’s facing undefeated Mason Smith tonight in the co-main event, before Paul Gallen and Kris Terzievski fight for the Australian and Australasian titles. 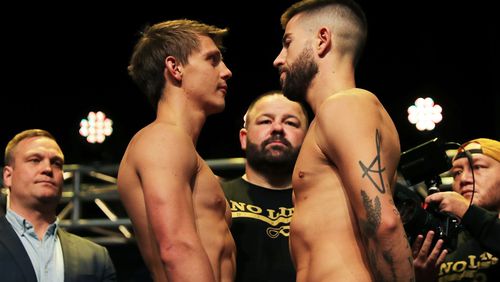 “I’m hoping that he stays nice and relaxed, nice and calm, boxes at first and then finds the shot and knocks the guy out cold,” Tim said of his brother – who adopted a zen-like approach to the fight, but promised yesterday to unleash ‘chaos’ when the time comes.

“He’s like that. He’s an overthinker, but he’s learned to block it out and he’s having a ball in there, he’s enjoying himself,” Tim said.

Tim will be ringside in Newcastle before flying out to watch the title unification bout between Jermell Charlo and Brian Castano, with the winner the next name on the Australian’s radar, for all the titles.

But there’ll be no cornerman work for the older of two brothers, as he recovers from recent corrective surgery on his hands. Even fans on the street have to settle for elbow bumps rather than handshakes when they say hello.