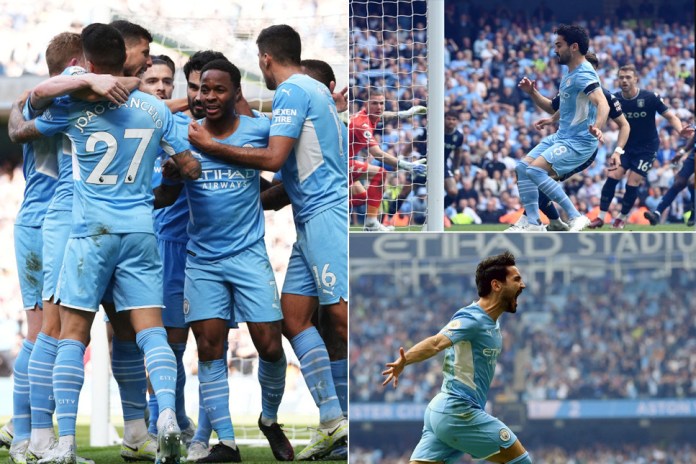 Premier League: Manchester City win 2021/22 Premier League – A post-match pitch invasion greets another Manchester City title triumph, as blue flare smoke pervades the Etihad, and an incredible late comeback seals the deal in the most dramatic of circumstances. Just short of the club’s unforgettable ‘Aguero moment’, a six-minute revival from two goals down to win still goes down as one of the Premier League’s most remarkable finales. Follow more Updates with InsideSport.IN

Toiling through most of the match, and lacking inspiration, City had twice been stung by a well-organised Villa side, but somehow summoned up three quick goals to move onto 93 points – one ahead of runners-up Liverpool.

Three goals in just under six minutes against Aston Villa seal the title for Pep Guardiola’s men, beating Liverpool by a point. pic.twitter.com/WsNv0uszJI

79′ Rodri equalises for Manchester City with a great effort from yards out!

Coutinho waltzes through and picks out the bottom corner!

67′ Guardiola turns to Gundogan. On for Silva.

55′ Watkins with a great chance to make it 2-0 straight from Olsen’s goal kick but wastes it. Flag goes up for offside but he started that run in his own half. Sterling on for Mahrez.

54′ Sterling about to come on

49′ Gabriel Jesus flies in at the back post but can’t convert. Pep Guardiola is up and applauding, asking for the Man City fans to get the atmosphere going again.

45′ Departing captain Fernandinho is being replaced by Oleksandr Zinchenko.

30′ CHANCE! Gabriel Jesus runs clear after a loose touch from Villa, but he scuffs his shot into the ground and it trickles well wide. The moans and groans increase inside the Etihad.

29′ Jesus goes for goal from a tight angle, but Olsen stands tall to keep it out.

25′ The hosts counter-attack and Foden’s shot is deflected just wide of the post.

A quick City counter ends in Mahrez weaving his way to the left byline, and his low cutback is desperately cleared away by a sliding Digne at the back post, with De Bruyne lurking dangerously.

After Digne returns to his feet, City are back on the attack. Olsen is forced to punch away a De Bruyne corner, allowing the visitors to eventually get the ball clear.

City have won nine of their last 10 Premier League matches against Aston Villa, including the last six in a row, while Villa have lost 15 of their last 16 away league games against today’s opponents – losing each of the last 11 in a row since April 2007.

Villa’s first corner results in a short spell of pressure, but the ball then strikes Digne straight in the face from a Chambers drive, and the full-back is laid flat out on his back. The game is paused while he receives medical treatment.

A long, straight ball by Fernandinho towards Jesus is just smothered by Olsen in the Villa goal. Seconds later, the Swedish goalkeeper gets away with clattering a clearance straight into the fast-closing Jesus.

Another run by Cancelo ends with the City full-back prodding a reverse ball for Foden harmlessly over the byline, and a promising attack comes to an end.

Cancelo bursts through the centre of Villa’s defensive third, but thumps a shot straight at Chambers on the edge of the box, and Villa get the ball at least partly clear. It has been a bright start from City, and title rivals Liverpool have gone behind at Anfield!

Fouled by Chambers, foden earns a free-kick on the left flank, near the touchline, and City have a chance to deliver the ball into the box. However, Fernandinho can’t make clean contact on the ball with a header from De Bruyne’s cross.

A nervous start by Olsen sees the Villa debutant overhit a pass towards Cash straight out of play, much to the sudible delight of the home fans.

0′ We are underway at the Etihad

In the battle of survival, Everton managed to secure safety while Burnley and Leeds United will fight their way to seek avoid relegation in the Final matchday of the Premier League 2021/22 season.

We could be in for some drama in the Premier League after all. Liverpool’s win against Southampton on Tuesday means the title race goes down to the final day with the Reds hosting Wolves while the league leaders Man City take on Aston Villa at the Etihad.

Pep Guardiola knows his side will retain the crown if they win on Sunday but Steven Gerrard will rock up to Manchester aiming to spoil the party and do his old side a favour.

City lead Liverpool by a point heading into the final round of the season on Sunday and Guardiola has the opportunity to clinch the title on home turf for the first time when they welcome Aston Villa to the Etihad Stadium.

City will be Champions with a win, while their superior goal difference (+72 compared to +66) means that if they drop points, Liverpool would still need to win their game against Wolves if they are to claim the title.

Any dropped points by Jurgen Klopp’s side on the final day will see the title remain in Manchester regardless.

It will take an almighty catastrophe for Tottenham not to be in the Champions League next season with Antonio Conte’s men needing just a point at recently relegated Norwich City on the final day to confirm their spot.

Arsenal supporters be will on the radios in the Emirates waiting with their fingers crossed as they face Everton who recently confirmed their survival.

Spurs are in a strong position, however, and a superior goal difference (+24 compared to +9) means even a draw at relegated Norwich should be enough to secure their place in the Champions League next season.

West Ham United can still leapfrog Manchester United and book their return to the Europa League if the Hammers see off Brighton and Man United lose to Crystal Palace at Selhurst Park which will see the Red Devils play in the Europa Conference League.

Following Everton’s dramatic comeback win against Crystal Palace on Thursday, the third and final Premier League relegation spot will be occupied by Leeds or Burnley.

Both sides sit on 35 points ahead of their final fixture, with Leeds travelling to Brentford while Burnley host Newcastle at Turf Moor and it’s all to play for both the teams.

The advantage is with Burnley who have a far superior goal difference (-18 compared to -38) and have a final fixture at home, taking on Newcastle at Turf Moor. Leeds, who need to better Burnley’s result to survive, travel to Brentford.

Premier League: Golden Boot, Top assister and Golden Glove to be decided on the Final Day