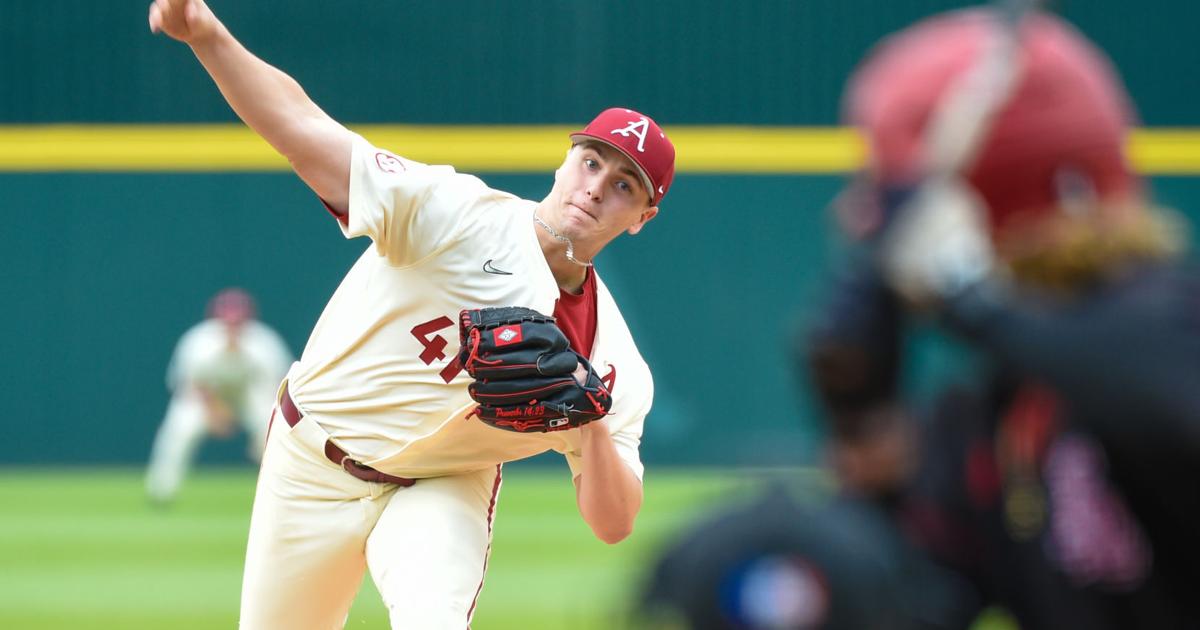 FAYETTEVILLE — For his pitching performance in Wednesday’s 10-3 non-conference victory over Arkansas State at Baum-Walker Stadium it appears Bryant’s Will McEntire might net an Arkansas travel roster spot for the Razorbacks’ SEC West weekend series at Texas A&M.

Third-year sophomore right-hander McEntire, redshirted last year and 1-0 this season, didn’t get the win Wednesday for his 4 2-3 inning start but allowed just one run on three hits and struck out five.

McEntire did walk four, but Van Horn credited ASU hitters for working some of those walks.

“They weren’t like four-pitch walks,” Van Horn said. ‘They were full-count walks, guys battling. Some of his misses were close. You take away maybe two of those walks, I think he had a really good outing. Four walks in 4 2/3 innings is too much. Usually it’s gonna get you. But he did a good job of keeping the ball down. He worked out of a jam or two. I thought he did a pretty good job.”

“Last week (three shutout innings in a 6-0 victory over Arkansas-Pine Bluff) he threw great. This week he threw good. Just probably going to give him the ball again next week.”

Or possibly even as an active SEC roster reliever Sunday.

“McEntire hasn’t been on a road trip with us and we’re gonna take him.” Van Horn said. “He may be on the (active) roster. I don’t know. If we feel like he wouldn’t throw Sunday, maybe not. But at least he’d been there working out with us, getting ready to pitch.”

McEntire said it would be his first travel roster since going to the February tournament in Houston as a 2020 freshman.

Two starts in two weeks has inspired his confidence.

“I knew once I was given the opportunity that I could run with it,” McEntire said. “I knew they were going to give the young guys a chance; there’s a reason those guys are here. But once I got the opportunity, I knew I could roll with it.”

“Really loved the defense behind me,” McEntire said. “Didn’t have my best stuff today, but the two double plays were huge and confidence-boosting.”

Heston Tole, inheriting a 6-1 lead with two out and a runner at second on Jared Toler’s RBI single followed by a McEntire wild pitch, logged the victory finishing the fifth inning’s final out and throwing a scoreless sixth.

Sophomore backup catcher Dylan Leach led the Arkansas attack starting against the Red Wolves going 2 for 4 with three RBI including a 2-run home run in the 3-run second inning off losing ASU starter Jakob Frederick. Jacob Battles, 2 for 5, doubled leading off the second and scored on a sacrifice fly by freshman first baseman Kendall Diggs, 3 for 3 with two RBI.

Diggs singled home a run during the 3-run third after Jace Bohrofen, 2 for 4, doubled home two.

The Hogs added four runs in the fifth including another Leach RBI.

“I think he’s been swinging the ball well in mid-week games,” Van Horn said of the games Leach starts to rest regular catcher Michael Turner for the SEC weekend. “He’s getting better with the bat, obviously. He works hard. I think he’s been steady behind the plate.

He’s a guy I wouldn’t have a problem catching in a conference game or bringing him off the bench to pinch hit. I’ve even considered that a couple of times.”

The Hogs had a scare when designated hitter Brady Slavens, 4 for 5 with grand slam against ASU Tuesday night, left Wednesday’s game requiring medical attention after fouling off a pitch that bounced off his eye.

“What the doctors told me and they said it kind of messed up his contact (lens),” Van Horn said. “ He looks like he’s a little puffy underneath the eye and he’ll probably have a little bit of a black eye but they said he’s going to be OK. As of now that’s what I’ve been told.”