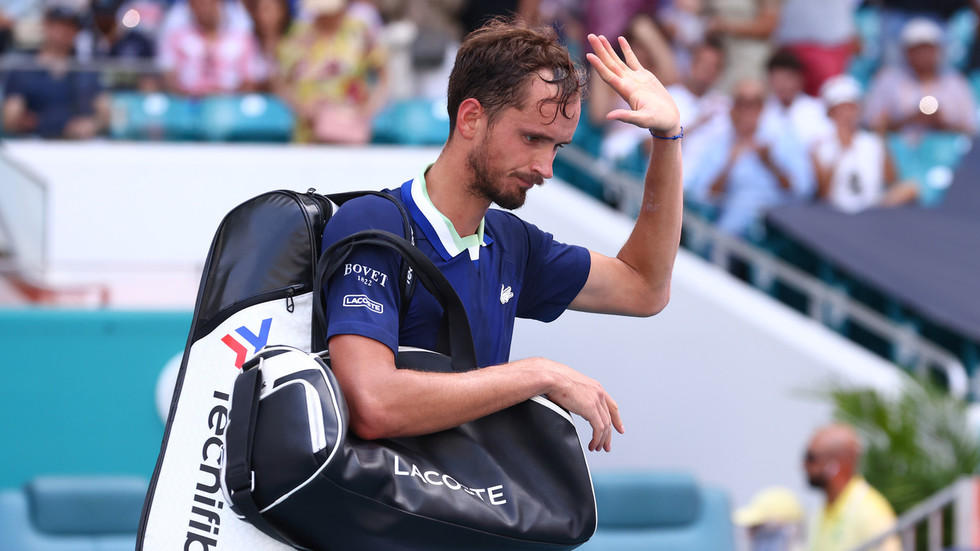 Daniil Medvedev struggled with fatigue and appeared to criticize the tennis balls being used as the Russian fell to defending champion Hubert Hurkacz in the quarterfinals of the Miami Open, later making an unusual analogy to describe his physical condition.

Knowing that a run to the semifinals would see him leapfrog Novak Djokovic again at the peak of the ATP rankings, top seed Medvedev complained of dizziness and cramp during a 6-7 (7-9) 3-6 loss on Thursday.

Medvedev appeared uncomfortable for much of the match in the stifling Florida humidity, taking a medical timeout in the second set and later hunching over and holding his left knee.

At one changeover Medvedev turned to the camera and appeared to criticize the balls, calling them “garbage” and advising observers not to buy them.

“All the match I was not feeling my best. But, you know, sometimes it happens,” Medvedev said in his post-match comments, the ATP reported.

“I don’t know the actual reason. Maybe the heat. But I was feeling super, like, dizzy, tired, and there was this long game where I couldn’t serve anymore.

“Then in the locker room I was cramping quite much, so physically was not easy. But at the same time, that’s part of the game.”

In a typically colorful turn of phrase, the Russian said the cramping he endured after the match had left him feeling “like a fish on the sofa” – a comment quickly dubbed the “quote of the year” by some sports pundits.

Medvedev was unable to capitalize on Djokovic’s absence from the so-called ‘Sunshine Swing’ events in the US this month, suffering a shock third-round exit at Indian Wells before his struggles against world number 10 Hurkacz in Miami.

Djokovic will retain the world number one spot in Monday’s rankings, just 10 points ahead of Medvedev, having been overtaken by the Russian last month when he became the first new name to achieve the feat in 18 years outside of Djokovic, Rafael Nadal, Roger Federer and Andy Murray.

Djokovic was forced to miss both Masters events in the US this month because his unvaccinated status prevented him from entering the country.


Medvedev was philosophical despite failing to recapture top spot.

“For me was more important in a way just to win the match itself than to become a No. 1 by winning the match,” said the 26-year-old.

“I saw it more as a bonus. So I don’t feel like I was tight or anything because of this. To be honest, I played a lot of matches where I had the pressure, different [types], and it’s not like something new happened today in terms of like going out of court and feeling crazy tight or something. So I don’t think that nerves were part of this…

“I’m in the right direction, so it’s good,” added the US Open champion.

Medvedev and Djokovic are both listed as lining up for the Rolex Monte-Carlo Masters which gets underway on April 9, although the event is played on his least favored clay surface.

Beyond that will be the French Open at the end of May, although Medvedev’s spot at Wimbledon at the following Grand Slam has been questioned after UK sports minister Nigel Huddleston said any Russian athlete hoping to compete would have to sign a form denouncing any ties to President Vladimir Putin because of the crisis in Ukraine.

Medvedev has not spoken directly on the conflict but has issued numerous calls for peace. Russian and Belarusian players are already banned from displaying national symbols at ATP and WTA events.

In Miami, Medvedev’s conqueror Hurkacz will continue the defense of his title with a semifinal against Spanish teenage sensation Carlos Alcaraz, after he overcame Miomir Kecmanovic in their last-eight meeting.