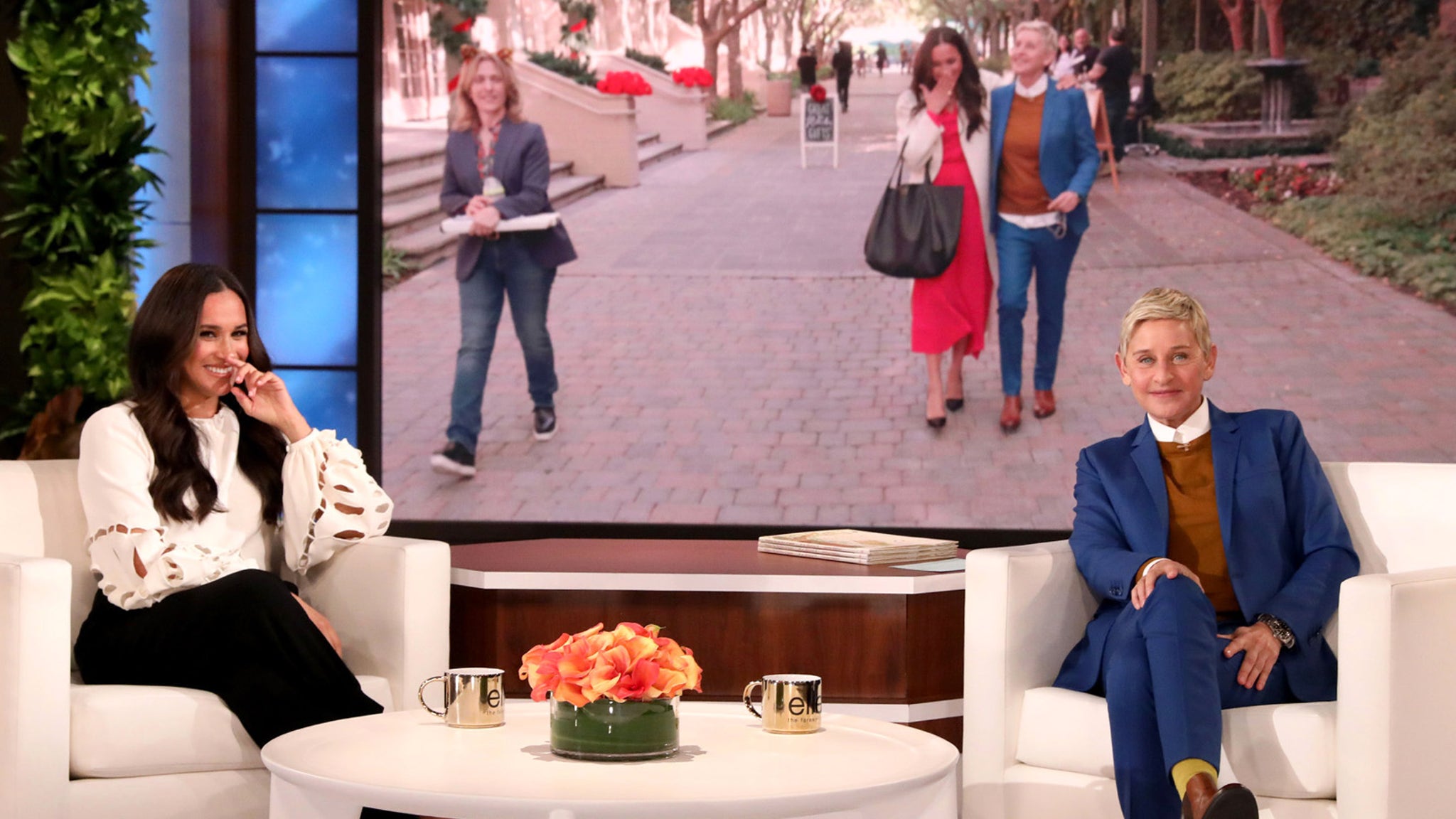 The Duchess of Sussex also revealed what her kids were for Halloween and recalled the time she and her now-husband Prince Harry went to a Halloween party in disguise before “it was out in the world” that they were together.

It goes without saying that Meghan Markle is a woman of many talents — but she has just added another title to her resume: prankster!

During Thursday’s episode of “The Ellen DeGeneres Show,” the Duchess of Sussex participated in Ellen’s infamous hidden camera prank. Meghan, 40, visited vendors on the Warner Bros. studio lot while following any and all instructions from the talk show host, who was telling her what to do via earpiece. Ellen made Meghan say and do some weird and bizarre things, such as referring to herself several times as “Mommy.”

As shown in the clip, above, Meghan was escorted by one of Ellen’s writers, who pretended to be Meghan’s assistant. Meghan first went to the crystal booth, where Ellen had her touch a bunch of crystals and say things like she had “healing powers.” Meghan also was instructed to put a large rock against her forehead, while doing a bizarre chat.

She then went on to prank the hot sauce table, where Ellen had her “bounce up and down” with excitement and eat a tortilla chip “like a little chipmunk.” After eating a chip with some really spicy hot sauce, Meghan was instructed to grab some milk out of her tote — and it was a baby bottle full of milk.

Meghan hit up the cookie table next, where Ellen had Meghan eat a cookie sample — again — “like a chipmunk,” tell a bad joke, put cat ears on and even sing a song. Meghan kept singing for the vendor, before Ellen finally came out and revealed it was all a prank.

The video then cut back to the talk show, where the vendors were in the studio audience. Meghan and Ellen applauded the three of them for being such “great sports” throughout the whole prank. Watch it all go down in the full clip, above.

13 Celebrities Who Had Unexpected Jobs Before Fame

During her appearance on Ellen, Meghan opened up about life at home with Prince Harry and their two children: Archie, 2, and Lili, 5 months. She shared an adorable new photo of Archie — and it’s safe to say that he definitely has inherited his dad’s red hair!

In the sweet image, which was shot from behind, Archie — who was wearing a blue shirt, jeans and yellow Peppa Pig rain boots — can be seen standing inside the chicken coop at his family’s Montecito home, with a small basket in his right hand. As shown in the pic, below, Archie was looking at a group of chickens, who were eating off of a mini-sized picnic table.

Ellen — who is neighbors with Meghan and Harry — said Archie is “so sweet” with the chickens and called him “such a gentle soul.”

Also during the chat, Meghan shared how she and her family celebrated Halloween last month, saying that they spent the holiday at home, and even saw Ellen and Portia as well. Meghan also revealed what Archie and Lili dressed up for– though Archie didn’t keep his costume on for long.

“We wanted to do something fun for the kids, and then the kids were just not into it at all,” Meghan told Ellen.

“Archie was a dinosaur for maybe five minutes,” she added, to which Ellen chimed in, saying, “Not even five minutes. Finally, Harry talked him into putting the head on.”

As for Lili, her costume was a skunk. “It was so cute,” Ellen said and Meghan gushed, “I know! Like Flower from ‘Bambi.'”

Speaking of Halloween, Meghan also recalled the time she and her now-husband went to a Halloween party in disguise before “it was out in the world” that they were together.

“He came to see me in Toronto and our friends and his cousin [Princess] Eugenie and [her now] husband Jack [Brooksbank] they came as well,” she said. “The four of us snuck out in Halloween costumes to just have one fun night on the town before it was out in the world that we were a couple.”

Meghan shared that the Halloween party was “post-apocalyp[tic]” themed and they all had “very bizarre costuming on.” She added, “We were able to just sort of have one final, fun night out.”