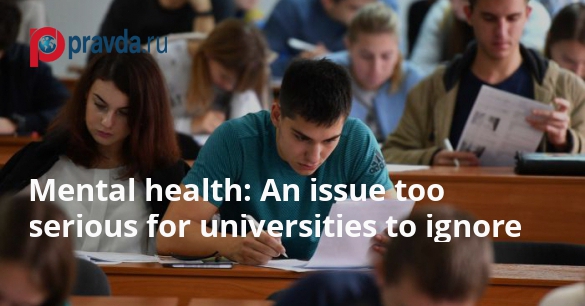 Today’s students have more problems compared with their predecessors. Besides having the burden of having to pay off student loans, students now have to cope with the uncertain effects the coronavirus pandemic will have on their future employment prospects. It is hardly any wonder that students have more than average levels of stress and anxiety. It is therefore especially important that universities take care of their students’ mental health. Although they do not stand in loco parentis, universities have a responsibility to offer pastoral care to their students and even more so now in the new normal. Universities have to do this, while at the same time providing an academic environment for students, which enables them to maximise their potential.

Universities must also recognise the vital role international students play in the higher education experience, making the internationalisation of higher education a reality. Regrettably however during the pandemic, some Chinese students have been subjected to an alarming level of racial abuse at their universities abroad for the sole reason that they have been blamed for the spread of coronavirus on campus. There have been reports made by students affected in this way that they have not only suffered discrimination from their fellow students, but also from universities. It goes without saying that this state of affairs cannot be allowed to continue. Universities must punish such behaviour among their students proportionately. If though, the university authorities are responsible for such wrongdoing, more stringent preventative measures are required. If necessary, laws have to be introduced to compel universities to treat their foreign students fairly.


It is obvious that universities are responsible for the wellbeing of their entire student body, both domestic and international students alike. The question however is how universities can best respond to the mental health needs of their students in our rapidly changing world.

Yale University took the progressive step of running what is commonly referred to as the Yale happiness class. It is otherwise known as Psyc 157: Psychology and the Good Life. This class was prompted by the experiences Dr. Laurie Santos had as Head of Silliman College at Yale. This position required Dr. Santos to live with students on campus, meaning that she could see for herself the whole gamut of emotions they were having. Dr. Santos found that many students under her care were stressful, anxious, lonely and stressed about the future. As an Associate Professor of Psychology, Dr. Santos decided to put these findings to good use and ran the Psyc 157: Psychology and the Good Life class. This class was taught in-person during the spring 2018 semester. It turned out to be one of the most popular classes offered by Yale in its history. In the words of Dr. Santos, the class was a mix of practical and evidence-based tips for students to reduce their stress and improve their wellbeing. The success of this class led to it being developed into a course entitled “The Science of Well-Being”. This free course has been run online on coursera.org and over 3,700,000 people have enrolled for it so far.

Universities can also ensure that their students’ mental wellbeing is protected by drawing on a resource, which is often overlooked — their graduates. Universities have to take into consideration that students with mental health problems may not wish to discuss their difficulties with university staff. Students might be reluctant to do so out of fear that this could have an adverse impact on their progress at their respective universities. Given that students might be excluded from their universities because of serious mental health problems, this is an understandable concern.

To avoid such a dilemma, universities could give students the option of contacting alumni. Some universities have launched mentoring schemes, which involve alumni working in certain fields mentoring students, who are interested in pursuing careers in those same areas of employment. The graduates offer this service free of charge. Taking into consideration the current socio-economic climate, this initiative could be widened to allow university graduates to become life mentors to students. The success of such an enterprise would naturally depend on each university’s willingness not to overpolice it. However, such an endeavour could be successful as universities’ former students have more to offer students than just careers advice.

Graduates also have life experiences they can share with students, which can be just as beneficial as career mentoring. Further, students could feel confident that their academic and professional prospects would not be negatively affected by the university graduates mentoring them in this way. Such an arrangement would also help universities financially as this scheme of life mentoring could be rolled out with university graduates working as volunteers, as they will be only too keen to help their universities.

Universities have to adopt a new way of thinking. They cannot just spend large amounts of money on the problem of mental health and hope that it will go away. Resources have to be allocated in a measured way to deal with this issue. Further, universities must put in place other initiatives to combat this problem, which is fast becoming one of the most serious of our generation. To highlight this, some students have even committed suicide because of the unbearable pressure they felt they were under at university.

Universities must therefore take action to protect their students before it is too late. Some universities have taken the innovative step of inviting students to opt in and give consent for a designated parent, guardian or friend to be contacted in situations, affecting a student’s physical or mental wellbeing. This is a positive move.

However, universities must still do more. The problem has nothing to do with resources. It has to do with universities’ willingness to move out of their comfort zone and accept that life has changed since Covid and they have to change also. Gone are the days when universities could just take their students’ wellbeing for granted, thinking that if they had problems, these would be dealt with by students’ parents and counsellors. After coronavirus, the role of universities is no longer only to educate young people in their chosen subjects, but also to make sure that students are mentally prepared for what the future will bring. If universities do not perform this duty, they will be failing the leaders of tomorrow.