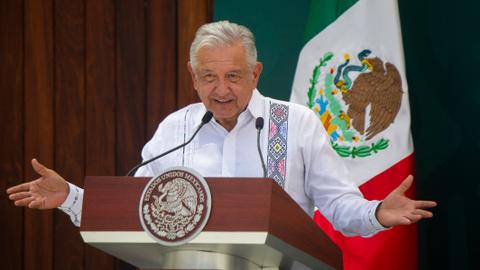 The president has faced criticism that government officials and resources have promoted the referendum that will determine if he will continue in office until 2024 or resign.

Mexicans have been voting on whether their popular president should end his six-year term barely midway through or continue to the end.

Strangely, President Andres Manuel Lopez Obrador was the one who pushed for the first-ever referendum of its kind in Mexico on Sunday.

It was considered a safe bet. The referendum is only binding if at least 40 percent of the country’s electorate votes — something experts believe unlikely — and Lopez Obrador has maintained approval ratings around 60 percent.

With that in mind critics have decried the exercise as a waste of money — almost $80 million — and just a way for Lopez Obrador to rally his base midway through his time in office.

For someone known as an eternal campaigner the expected reaffirmation of support makes sense, but for a president outspoken about austerity it raised questions.

Some in the opposition have called for voters to boycott.

Lopez Obrador’s Morena party has been active in encouraging the president’s base to vote. The president has faced criticism that government officials and resources have promoted the referendum.

How many voters will turn out has been the overriding question.

Only 7 percent of voters participated in another referendum last year asking whether former presidents should be prosecuted, according to Patricio Morales, an analyst at Monterrey Institute of Technology and Higher Education.

Lawmakers from Lopez Obrador’s party cut the National Electoral Institute’s budget and the institute said it didn’t have the money to pull off the referendum originally estimated to cost more than $191 million.

It refused to move ahead until the Supreme Court ruled that it must. Adjustments lowered the expected cost to $78.2 million.

READ MORE: Over a dozen people killed at clandestine cockfighting ring in Mexico