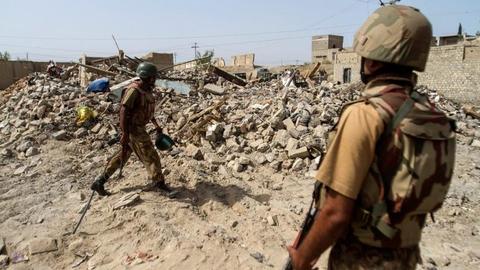 No militant group has claimed responsibility for the attack but suspicion fell on Tehrik-i-Taliban Pakistan, a separate group from Afghanistan’s Taliban.

Militants ambushed a Pakistani military convoy in a former stronghold of the Tehrik-i-Taliban Pakistan, also known as Pakistani Taliban, near the Afghan border, triggering an intense shootout in which seven soldiers and four insurgents were killed, the military has said.

Friday’s statement from the military said the ambush took place on Thursday in North Waziristan, a district in the volatile northwestern Khyber Pakhtunkhwa province.

There was no immediate claim of responsibility but suspicion fell on the Pakistani Taliban or TPP, a militant group that is separate from the Taliban who seized power in Afghanistan last August.

Daesh terror group’s regional affiliate also has a presence in the area and has claimed to carry out some attacks there in the past.

READ MORE: Why the Taliban ignores Pakistan’s demands to take action against the TTP

The latest violence comes as Pakistan’s military said on Thursday that 128 militants have been killed since January in the region bordering Afghanistan. The military acknowledged that nearly 100 soldiers have been killed in militant attacks during the same period.

Though separate, the Afghan Taliban and TPP are close allies and Pakistani Taliban leaders and fighters have over the years sought sanctuary across the border in Afghanistan.

Before the Afghan Taliban swept to power, Kabul and Islamabad often traded accusations, accusing each other of sheltering militants.