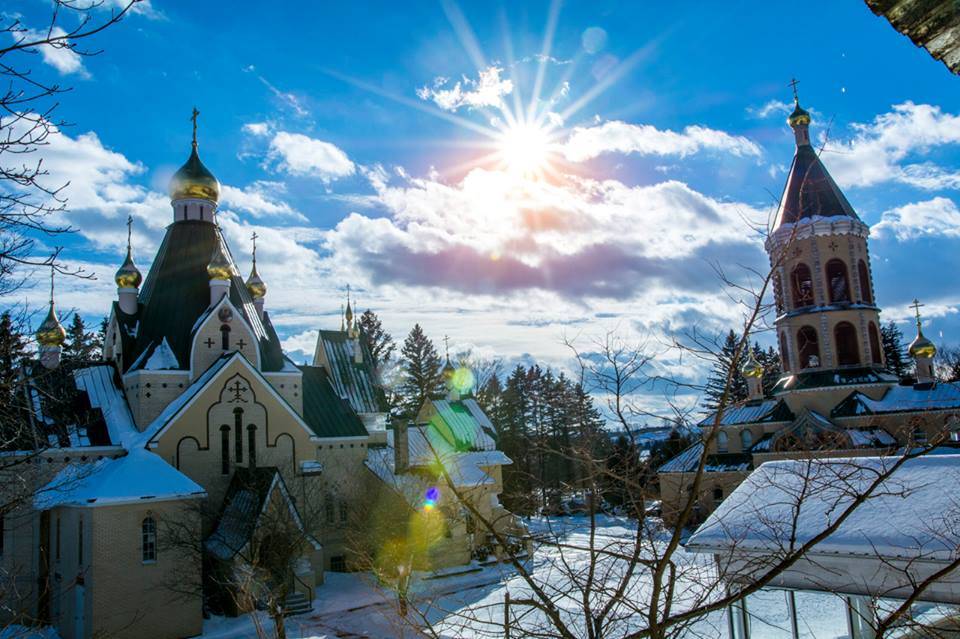 This article originally appeared on a new site about the Christian renaissance in Russia, called Russian Faith. Their introductory video is at end of this article.

Tucked away in Upstate New York, there is an obscure, small American town, a town no different from the other towns that are full of quiet houses, a public library and a post office.

It’s no different, that is, until one comes upon, suddenly, a sprawling, splendid green-domed Russian monastery: the legendary Holy Trinity Monastery in Jordanville, NY.

Built in the 1930s by monks from what had been the Russian Empire, the monastery is like a time capsule, where refugees from pre-revolutionary times, and their students, have kept a tradition alive, like they were guarding an invaluable treasure, keeping a flame alive that might otherwise have been snuffed out.

The Seminary (theological school) that the monks opened on the grounds of the monastery in 1948, differs from any other theological institutions in America in its unique legacy of staunch conservatism and the ascetic, monastic lifestyle it requires its students to lead.

For decades, the monastery has been the spiritual center of Russian Orthodox Christians who fled the Soviet Regime, a place where Russian immigrants went on pilgrimages, made friends, became monks, met spouses of their same faith, and prayed for their dead.

Almost all the pastors of the Russian Orthodox Church Abroad (ROCOR), whether they serve in NY, Australia or Germany, graduated from this monastery.

Even when the Russian church in Russia began to rebuild itself after the collapse of the Soviet Union, it could draw on the traditions and individuals who had kept the old traditions alive overseas, in Jordanville.

But aside from its service to the Russian people and Russian land, Jordanville Monastery also provides a long longed-for alternate reality to Americans and Europeans who seek a spirituality that is informed by Christian tradition and asceticism.

For the monastery is indeed a different world, a strange, beautiful, elevated testament to the Russian Orthodox faith in what is swiftly becoming a militantly materialistic, secular world.

Here, bells continue to ring, ancient prayers continue to be chanted, and church services occur every day. Monks in black robes quietly fulfill their obediences and young men from America, Russia, Europe, Asia and Africa wake up at 5 am each morning to attend Divine Services before their vigorous classes begin.

And though many of the classes in seminary are now in English, the spirit of Jordanville is still infused with the prayer and teachings of the Russian monks who brought their 1000-year old spirit of prayer, asceticism and strict tradition with them into exile.

It is a world that one truly must experience. Consider donating. Consider visiting. You will not regret it.