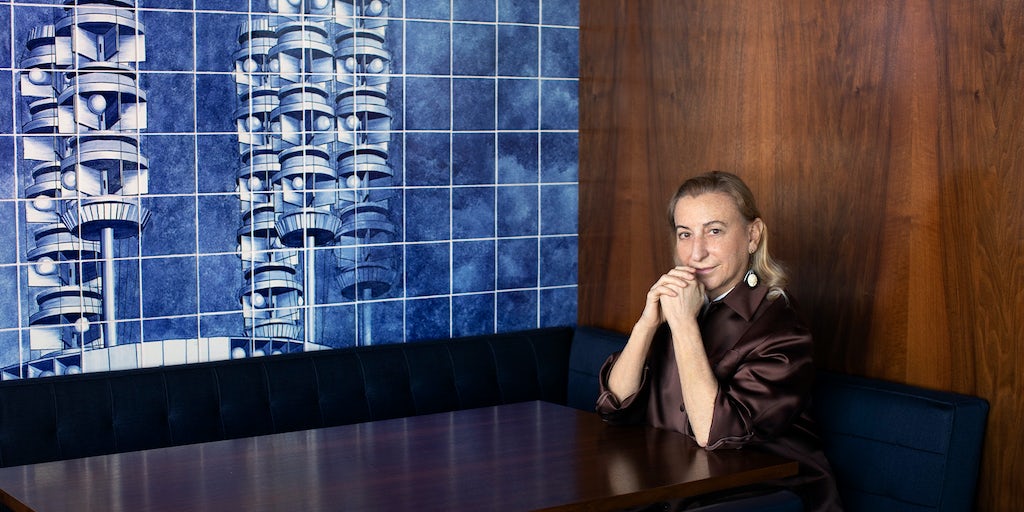 PARIS — For Miu Miu’s return to the arena of live presentations, Miuccia Prada is collaborating with the Moroccan multi-media artist Meriem Bennani, who has made a video that will be revealed with the show and worked into the new collection’s online launch. It’s the first time Prada has collaborated in such a way, though she’s been asked a lot. “I never liked the idea because, at the end, it was only just to use each other, to sell more.” She was also sensitive to exploiting art for her own devices, “not using people to make myself more beautiful, more clever.” Now Prada has clearly had a change of heart. “I think I gave up so much I could have done,” she says ruefully. “I see that in collaborating with an artist, I share ideas with her so she can introduce something else to enlarge them.”

Over the past ten years, Miu Miu’s Women’s Tales initiative has commissioned twenty short films from female directors, but, as Prada points out, it’s not widely known. The collaboration with Bennani feels like a concerted effort to give the artist’s contribution greater weight. Prada has bought her work. “She’s really tough,” she says. She is also political, which allows the designer to have a different kind of voice in her work.

The idea of having other voices speak for her, maybe saying something she would find it difficult to say, is a new feeling for Prada. “This is the first experiment where actually I had more or less everything behind it because I said okay, the video is going to be her, whatever she does. It’s her voice completely.” Tellingly, Prada feels the collaboration as it appears online will be more illuminating. She thoroughly enjoyed the experience of producing films rather than fashion shows during the last 18 months — “Much more difficult, much more complicated, but also much more rich” — she didn’t want to turn her back on that audience with a straight runway redux.

Miuccia is, of course, has been collaborating with Raf Simons on the creative directorship of Prada’s signature collection, an unprecedented arrangement in fashion. Miu Miu, on the other hand, has always been her personal vehicle, the perverse, willful and spirited little sister of grown-up Prada. On Monday morning, she is, for instance, wearing a plain checked shirt and navy nylon blouson but she has a huge gold necklace round her neck, Van Cleef and Arpel from the 70s. “This summer, I wanted to buy something a bit vulgar,” she says with a sly chuckle.

With Raf’s arrival at the main line, Miu Miu may take on a new significance for her. “I can probably do a better Miu Miu. Prada is always more formal. And the Fondazione Prada is important. But with Miu Miu, I can sneak more in, I can be more out there with people.” She’d like to be more radical. “But you have to be able to. One thing is having the will, the other is translating your will into reality.” Maybe it’s the prospect of that challenge that has helped boost Miucci’s state of mind. “I felt fear for five years,” she admits. “Fear was my only sentiment.” She lost four of her best friends, and, plagued by death and anxiety, even before the pandemic, her mood was terrible. “Now I have a vision of something that I can do.” She claims that every single day, she debates herself: should I stop working, start a different kind of adventure, introducing more ideas in different forms? “You have to be inspired. Maybe I hope I’m inspired because I’ve been in a good mood now for three or four months.”

Now I have a vision of something that I can do.

Despite her angsty recent past, Prada’s experience with the pandemic was actually the instrument of her opening-up. “I never did so much and never thought so much in my life as in [these] past two years,” she says of her lockdown in Milan. “And I think it was very productive. I really changed a lot in my mind.” The biggest change was her attitude to technology. “For me, it was kind of revolutionary. It’s the first time I really faced the importance of it.” Her skepticism, which she says was probably a generational thing, evaporated once she realised tech’s relevance. And then came the question: how can I be more relevant?

“The relevance comes when you bring reality into your work,” Prada answers her own question.

But it’s not an easy answer because it hinges on confrontation. “Conflict is the story of my life,” Prada declares. That’s no surprise given that her greatest conflict is with the instrument of her good fortune. “Clothes are a part of life, but they’re not the meaning of life,” could be her motto. “Clothing is a little moment of fun, it’s useful, I wouldn’t underestimate the importance of clothing. But it’s a moment in your day,” she says at one point. “I think that people still consider fashion with some disregard,” she suggests at another. And, resignedly, “The concept of a piece of art or a movie is a big deal. A dress at the end is a dress, but it’s my instrument so I have to use it.”

As a self-described leftist feminist, famously canvassing for Italy’s Communist Party in the 1970s while wearing Yves Saint Laurent, Prada felt ashamed. “All my friends being politicians and intellectuals and me being in fashion meant it was very tough for me…I felt like this stupid girl, but I was not stupid. And actually, the person that gave me more value, the biggest intellectual, was the one who appreciated fashion the most.” With the passage of time, shame has yielded to a degree of embarrassment. “The world is such a chaos. Now finally we have it all in front of us. Anything you do is everywhere. Anything you say is everywhere. And how do you relate your little world of fashion to all the problems of the world? I feel embarrassed all the time because of my privilege. And because I think that people should be more interested in what is happening, more proactive, more political.”

She says she still holds more or less every single one of her beliefs from those days. “I changed a bit, but deep down, no.” Of course, she’s been asked to become a politician. “I say when I am old, and now I’m old I say when I’m really old. If I stopped working, I could do something else, but I’d have to stop working because as a rich fashion designer, I can’t do politics. That I’m sure about.” Maybe if she found a group she could be part of, she muses, “to be part of something if I would believe in it. But probably I would have done that already. And now the reality of politics is so bad that I can probably be much more political in my job, and my other activities.”

Speaking of which, Fondazione Prada in Milan is currently featuring a show cycle about neuroscience, an idea Miuccia nursed for years, until one morning she woke up, called the philosopher and ex-Mayor of Venice Massimo Cacciari and arranged to meet him in a bar, where she told him all about her idea. “After five minutes, he understood. So he started introducing me to these other scientists. They called the ten most important institutions in neuroscience from Harvard to China to Japan to wherever and they said they were happy to participate, but even happier if Fondazione Prada could become a permanent space for this encounter with neuroscience. And I said yes.” Miuccia is enraptured by the scientific miracles she has been exposed to. Ideas are her religion.

She has always been fierce, almost hysterical she says, about not combining her worlds, but she’s changing her mind here too. “Now I’m thinking that, with all that I’m doing, I should probably try to find a way to mix more… find a way to introduce more reality basically, more ideas, more thought, into the fashion conversation in my work.” Later, she’ll add, “I want to find a way to introduce more intelligence in my job because fashion is such a strong instrument. So I want to use it more. I want to try to give more tools — this is going to sound generic — to be more useful.”

With Simons as co-creative director, she’s no longer alone at the top. “By definition, it’s different from before. And I’m very open to his ideas because otherwise why did I call him. And actually, we are working together very well. We never had any problem of any kind, because if he doesn’t like something we don’t do it and vice versa. But I’m happy and he’s a very honest person, which is very good.”

Her longtime design director Fabio Zambernardi is still part of the equation, but Prada describes Simons as “my reference. And this is the first year we work together, so you have to learn to do it. Also, to have this part of somebody else is a bit liberating. It’s not only on my shoulders.” She hopes that means she’ll get more time for the rest of her interests. Time to stop and smell the flowers maybe, though it hasn’t happened yet. “Yesterday, I was thinking about the charm of flowers,” says Miuccia says. “How can it happen that flowers have this?” The wonders of nature await her.

A Surrender to Enjoyment at Miu Miu

Miuccia and Raf Want to Take You to the Club

The Unprecedented Coming Together of Miuccia Prada and Raf Simons