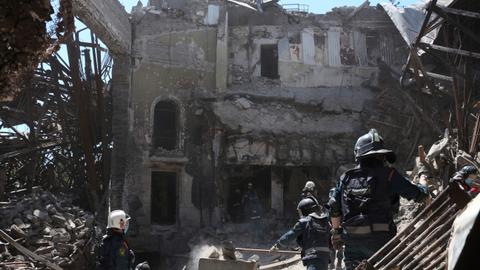 Relatives of Ukrainian fighters trapped in Azovstal steel plant call for fresh efforts to save them as fierce fighting in the eastern European country enters its 79th day.

Moldova is wary amid fears fighting may spread

Moldova’s foreign minister has said that the small eastern European country is on alert for any signs the conflict in neighbouring Ukraine could spill across the border.

Foreign Minister Nicu Popescu told reporters on the sidelines of a G7 foreign ministers’ meeting in Germany that “the situation is of course fragile, but it is nonetheless relatively calm. We do not face an acute military crisis today.”

At the same time the government has been preparing for “the full spectrum of options,” he said. “Our interior ministry, defence ministry, intelligence services are on high alert,” Popescu said, citing the presence of Russian troops in the separatist Moldovan region of Transnistria.

The impact of the Russian invasion on food exports from Ukraine, a traditional arable farming powerhouse, would be felt across the world, its agriculture minister has said.

“People across the world are paying the price for this war,” Mykola Solsky said in a press conference during a meeting of G7 agriculture ministers in Stuttgart.

Russia advises against travel to UK because of “unfriendly” visa stance

Russia has said it was recommending its citizens not to travel to Britain, complaining that authorities there were making it “virtually impossible” for Russians to obtain visas.

The Russian Foreign Ministry alleged Russian applications were being delayed because Britain was giving higher priority to Ukrainian refugees. It said Russians were also unable to pay on the British website via Mastercard and Visa, which have both suspended their operations in Russia.

“Taking into account the extremely unfriendly course of the UK towards our country, in order to avoid financial losses and other possible problems, we recommend that Russian citizens refrain, if possible, from travelling to the UK and trying to obtain British visas,” it said.

Finland is ready to cope in the event that Russia cuts off its supply of natural gas, the government’s emergency preparedness committee said after a meeting.

Key Finnish politicians had been warned of a possible halt to gas exports by Russia on Friday, Finnish newspaper Iltalehti reported on Thursday.

Defence Minister Antti Kaikkonen told reporters he could not confirm the report while the Kremlin said the newspaper report was “most likely a hoax” and reiterated that state-owned gas company Gazprom remained a reliable gas supplier.

Russia’s Foreign Minister Sergey Lavrov has said he doubts the motives of Ukraine’s intention of joining the European Union, while accusing Brussels of ambitions beyond the European continent.

Ukraine “is ready to declare a neutral, non-aligned status,” Lavrov told reporters following a meeting of CIS foreign ministers in Tajikistan’s capital Dushanbe. “At the same time, they are trying in every possible way to emphasise their desire to become an EU member,” Lavrov added. “There are serious doubts about how harmless such a desire is from Kiev,” he said.

Lavrov accused the EU of transforming from a “constructive, economic platform” into an “aggressive, militant player, declaring its ambitions far beyond the European continent”, pointing to moves in the Indo-Pacific region. “They are rushing to follow in the tracks already laid by NATO, thereby confirming the trend that they are merging with the North Atlantic Alliance (NATO) and will in fact serve as its appendage,” he said.

Ukraine has asked the G7 countries to seize Russia’s assets and hand them to Kiev to help rebuild the country, Foreign Minister Dmytro Kuleba says, adding that he hopes Hungary will agree with EU partners to an oil embargo on Moscow.

“Canada has already done this and I have a feeling that others will reach that point sooner rather than later. We are talking about hundreds of billions of dollars. Russia must pay,” he told reporters on the sidelines of a G7 foreign ministers meeting in northern Germany.

Swedish membership in NATO will reduce the risk of conflict in northern Europe, a security policy review by parties in Sweden’s parliament has said.

“Swedish NATO membership would raise the threshold for military conflicts and thus have a deterrent effect in northern Europe,” the report presented at a press conference in Stockholm said.

The first war-crimes trial of a Russian soldier since the start of Ukraine’s offensive has opened in Kiev.

A 21-year-old captured member of a tank unit is accused of shooting to death a civilian during the conflict’s first week. Scores of journalists packed inside a small courtroom in the Ukrainian capital where the suspect appeared in a small glass cage.

Sgt. Vadim Shyshimarin stands accused of shooting the 62-year-old man in the head in the northeastern village of Chupakhivka. He faces up to life in prison under the penalties spelt out in the section of the Ukrainian criminal code that addresses the laws and customs of war.

Finland has formally announced its intention to join NATO, saying its decision was a result of Russia’s invasion of Ukraine.

Lawmakers are expected to approve the plans next week. Moscow has reacted angrily, saying it will be forced to take retaliatory steps pic.twitter.com/IVARTOwS3n

EU foreign policy chief Josep Borrell has said that the bloc will provide another $520 million (500 million euros) worth of military support to Ukraine and that he is confident a deal could be reached in the coming days to agree an embargo on Russian oil.

Speaking to reporters on the sidelines of the G7 foreign ministers meeting in northern Germany, Borrell said the military support would be for heavy weapons such as tanks and artillery and take the bloc’s aid to about $2.08 billion (2 billion euros).

Borrell said he was also optimistic an EU embargo on Russian oil could also be agreed in the coming days. “I am sure we will have an agreement. We need it and we will have it. We have to get rid of the oil dependency from Russia,” he said.

Russia’s defence ministry has said that its forces have struck the Kremenchug oil refinery in central Ukraine, destroying its production capacity and fuel tanks.

The ministry also said its forces shot down a Ukrainian Su-27 aircraft in Kharkiv region.

Ukraine’s military says that Russian forces have staged assaults on multiple villages in eastern Ukraine as they try to expand control there, but not all have been successful.

In its daily operational note, the general staff of Ukraine’s armed forces said Russia’s military continued to launch artillery and air strikes on the embattled port of Mariupol, focusing on blocking Ukrainian fighters at their last holdout at the Azovstal steelworks.

In the Russian campaign in the east, villages were targeted near Donetsk, Lyman, Bakhmut and Kurakhiv, the Ukrainian military said. It said Russian forces also fired artillery on Ukrainian troops in the direction of Novopavlovsk and Zaporizhzhia, a major industrial city that has become a haven for refugees fleeing Mariupol.

Ukrainian forces have successfully prevented an attempted Russian river crossing in the Donbass, the British defence ministry has said in a regular Twitter bulletin.

Images suggest that Russia has lost armoured manoeuvre elements of at least one battalion tactical group and the deployed pontoon bridging equipment while crossing the Siverskyi Donets river west of Severodonetsk, Britain said in its intelligence update.

Find out more about the UK government’s response: https://t.co/7SVSQChAFe

US: Russia has forcibly taken ‘thousands’ of Ukrainians

The United States has accused Russia of forcibly taking onto territory under its control tens of thousands of Ukrainians, often singled out for their resistance to Moscow’s assault.

The remarks support allegations by the Ukrainian government which estimates nearly 1.2 million people have been deported into Russia or Russian-controlled territory and has denounced so-called “filtration camps” in which Moscow interrogates detained people.

“The United States assesses that Russia’s forces have relocated at least several thousand Ukrainians for processing in these ‘filtration camps,’ and evacuated at least tens of thousands more to Russia or Russia-controlled territory, sometimes without telling evacuees of their final destination,” said Michael Carpenter, the US ambassador to the Organization for Security and Cooperation in Europe.