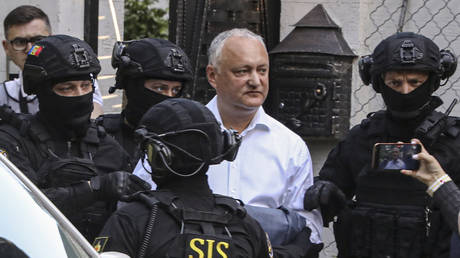 Moldovan President Maia Sandu has called on the Prosecutor General’s Office to conduct a fair investigation into the case against former President Igor Dodon, and to address alleged violations committed in the course of the investigation.

During a press briefing on Friday, the Moldovan leader said the prosecutors must thoroughly examine how the investigation against Dodon was conducted on Tuesday and the day before to determine how photos of the process were leaked to the press.

The former president, who led the country from 2016-20, was arrested by Moldova’s anti-corruption authorities on May 24 under suspicion of “passive corruption, illegal financing of political parties and illicit enrichment,” according to his lawyer. A day later, he was also charged with corruption and treason.

Sandu has said the investigation against Dodon should be carried out with “maximum transparency,” expressing hope that “the prosecutor’s office does not engage in political games neither by orders nor on its own initiative, because this will lead to further discrediting of the prosecutor’s office, the justice system and our European future.”

Dodon, who is currently one of the leaders of the Moldovan Socialist Party (PSRM), which has historically called for better relations with Russia, has denied all charges, claiming he has once again become “a target of orchestrated and politically controlled justice.” He stressed, however, that he has all the “necessary explanations that remove any suspicion of corruption and violation of the law.”

Dodon has also insisted that the political case against him was fabricated on the orders of Sandu, who is, in his view, acting at the behest of the US government.

Sandu, however, claims that she first learned of Dodon’s arrest through the press and read about the searches conducted on his property while she was on vacation in the US, adding that she was concerned with the leaks that were going out to journalists.

“I want the country to have an independent and professional judiciary that respects the law. This is what I advocate and work on. Corruption is a serious problem in the country. And the gentleman involved in the case (Igor Dodon), if he thinks that he is honest, should not worry,” Sandu said.

According to the Prosecutor General’s Office, the charges against Dodon are linked to the ‘bag case’, which is based on video footage from 2019 allegedly showing the former president being offered a bag, presumably filled with money, by a now-exiled businessman. Although Dodon is not seen accepting the bag, investigators suspect its contents were intended to finance his PSRM party.

The video was published in 2020, but at the time, prosecutors decided not to initiate a criminal case, citing insufficient evidence. Last week, however, interim Prosecutor General Dumitru Robu ordered the criminal probe to resume.

Dodon’s arrest has been met with outrage from the PSRM, which has been organizing protests in Moldova’s capital, Chisinau, demanding the immediate release of the ex-president and the termination of the criminal case against him.