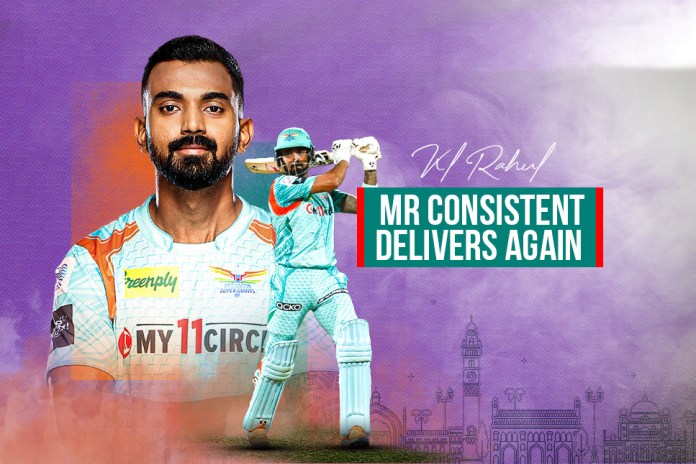 IPL 2022: Follow KKR vs LSG Live Updates – Mr Consistent of the Indian Premier League, KL Rahul has delivered with the bat once again in IPL 2022. He has passed the 500-run mark this season, and with this, the Lucknow Super Giants captain has become the first-ever Indian batter to score 500+ runs in five consecutive IPL campaigns. Follow IPL 2022 Live Updates and KKR vs LSG Live Updates on InsideSport.IN.

On Wednesday, Rahul’s Lucknow Super Giants took on Kolkata Knight Riders at the Dr DY Patil Sports Academy. While the limelight was stolen by Quinton de Kock with a fantastic 140, the skipper himself played a handy knock of unbeaten 68 runs from 51 deliveries, which included 3 fours and 4 sixes – thereby taking his total tally of runs in IPL 2022 past 500.

Notably, David Warner is currently topping the leaderboard when it comes to most number of 500+ runs seasons, as he has done it six times. Among the Indian players, Virat Kohli and Shikhar Dhawan were tied on five, and now, Rahul has joined the group of the most elite batters in this competition.

500 runs in IPL for @klrahul for the fifth straight season. Becomes the first Indian player to achieve this feat.#TATAIPL pic.twitter.com/Pt9XaJFdBt

Currently, Rahul is second on the list of IPL 2022’s leading run-scorers, behind only Rajasthan Royals’ Jos Buttler. He has scored 537 runs in 14 matches, which includes three half-centuries and also a couple of centuries.

As far as his IPL career is concerned, the 30-year-old has been absolutely unstoppable ever since joining Punjab Kings back in IPL 2018. He has scored over 600 runs in three of his last four seasons, and it seems certain that he will cross that mark this time around as well.