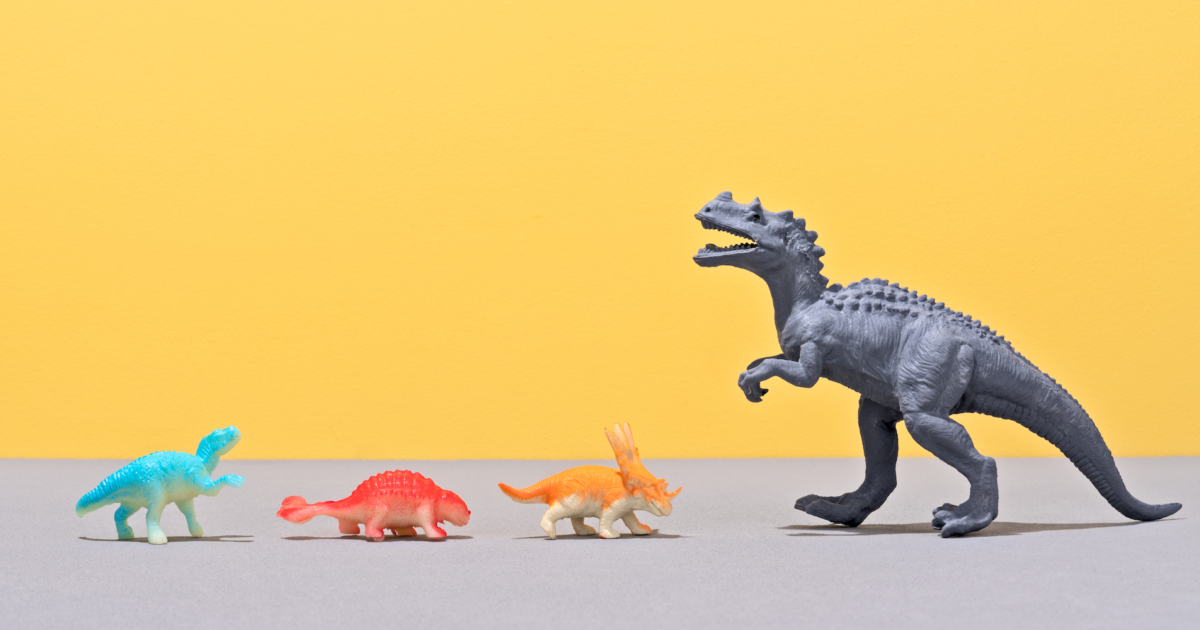 In my interview for a job at a private college, I was asked how competitive I was. It was clear from the interviewer’s tone that the correct answer was “very,” but that’s not really how I’d describe myself. Certainly not in a sports-like, must-win-at-all-costs way. Instead, I said, “I’m, uh, proud of when I do good work,” butchering the answer but getting the job anyway.

College enrollment had been steadily declining for years by the time I began my new job. Showing up to work felt like what (I imagine) showing up to work at Blockbuster in 2007 would have felt like. OK, that might be a little extreme but I always felt like the school’s sales pitch sounded a bit like Blockbuster’s. Sure, other education options were cheaper and more convenient, but it was all about the experience. You wouldn’t want to miss the experience.

And although the odds were stacked against her, my boss was on a mission to enroll more and more students each year. She was on a mission to win. Deb (not her real name) was ruthlessly competitive, demanding, and, most confusingly, sometimes warm. She was way too intense—a stare from her felt like an examination and she always seemed like she might snap. And yet, many people adored her. At least, they did at first.

My first clue that Deb was particular was when I was walking to the kitchen at about 4:15 PM one day a few weeks into the job, and a coworker grabbed my arm.

“Have you responded to Deb’s email?” Deb had asked me a non-urgent question a few hours earlier.

“When she sends an email, she expects a response right away,” she said.

Freeing my arm from hers, I nodded and continued making my way down the hallway while my coworker looked on, seemingly surprised that I wasn’t rushing back to my office to answer the email at that second. I poured stale office coffee into my mug, then strolled back, wondering what exactly I had gotten myself into.

When a coach orders you to do something, they don’t mean later, or whenever you feel like it. They want you to run those 10 laps right now. And that’s how Deb was. She was like our out-of-control, meltdown-having coach.

Beware of a boss who wants you to be all in.

Early on in my time at the job, Deb told a story—proudly—about the day when one student (out of hundreds in the incoming class) changed their mind and decided to attend a nearby school instead. Upon hearing the news, Deb took off her high heel and slammed it as hard as she could on her desk, leaving everyone in the offices nearby to wonder what the heck had just happened. She cared so much about hitting those numbers—too much. And she wanted everyone else to operate at that same level. If you’re not willing to break a heel, do you really care at all?

I was in my 30s when I arrived to serve as an events planner for the office, but most of the employees were fresh out of college. Their jobs were to interact directly with prospective students to convince them to enroll, which I was relieved not to have to do. I just planned the visit days, which included events like sample classes and mixers. Before each of these visit days, Deb would send the staff from our office out early in the mornings with trash bags and gloves to pick up food wrappers and discarded beer cans and erase any signs of partying from the night before.

My colleagues generally didn’t kick up a fuss about trash duty. They were expected to be chipper at all times, no matter what they were doing. If they weren’t perky, it would’ve really popped the experience bubble. They even had to ring a bell each time they successfully convinced a student to enroll. The new staff rang the bell loudly and excitedly. But the longer someone had worked there, the quieter their bell rings became.

“Are you all in? I need to know that you’re all in,” she’d say to a struggling staffer, and they’d somberly nod.

To recruit from the slowly emptying pool of available students, Deb and her loyal second-in-command fostered competition among the staff. They were encouraged to “beat” one another’s numbers (of enrolled students), ideally by working long hours cold-calling teenagers (can you imagine something worse?) late into the evenings.

At the same time, Deb emphasized teamwork and what was best for the group. If anyone showed a whiff of disenchantment or any “attitude problems,” there were group bonding sessions about how we were all in it together and how we needed to keep going to support each other. We were a team.

“Are you all in? I need to know that you’re all in,” she’d say to a struggling staffer, and they’d somberly nod.

The weirdest part is how it kind of worked. It seemed like she cast a spell over the staff. I wonder if it was because so many of them were recent graduates who’d been on actual sports teams literally months before. I think part of the reason was that Deb mixed in just enough moments of friendliness to make people wish for more.

She’d ask the staff questions about their lives and friend them on Facebook. (May her friendship request forever live in my Facebook purgatory.) And that was nice—kinda. It made some folks want to open up to her. But it seemed to me that she also wanted to have something on her staff, just in case. To know just a little too much about them, so they wouldn’t want to stray.

You are, in fact, allowed to leave.

One by one, however, they did stray. In dark corners of the office, in hushed tones, they’d admit to me that they were thinking about quitting. Being around Deb’s energy was fine for most people at first, but inevitably it would start to wear on them. Primarily, I think, because they realized they didn’t want to give 100% of their energy to their jobs.

Obviously, I didn’t like that they were struggling, though I did love that they instinctively knew they could come to me to talk about it. Maybe it was because I was the age of, like, an unusually older sister. Probably it was because of the look on my face during those team huddles. I was wary and suspicious—and it showed.

To put it mildly, I was not—at all—all in.

By that point, I’d been in enough jobs to know the environment wasn’t normal. There was an ever-present fear that Deb was going to find out you weren’t fully committed. And because she was involved in basically every tiny detail and decision—down to the look of directional signage for events—it felt like you couldn’t move a muscle without her approval.

But there was a big obstacle for those thinking of leaving. Staff suspected, perhaps correctly so, that Deb would find out if they applied somewhere else. They had the impression that she was very connected in the higher education world. Whether it was true or not, she’d created an environment where employees were terrified of so much as looking at job listings. In the protective booths of run-down bars at happy hour, my coworkers would warn each other about how Deb knew everyone.

And people took those warnings seriously. Nearly all of those who left while I was there started over in other fields entirely. Two of the staff did something that was apparently unheard of and that Deb definitely didn’t approve of—they left for other jobs in the middle of the school year.

“You can’t control when a job opens up,” I said to one of them who was having a bit of a guilt crisis about the brand-new, exciting job they’d accepted. This person had broken Deb’s strict code of loyalty and felt legitimately bad about it. But it was ludicrous to give staff one short window each year to apply for new jobs and put in their notice, as though the entire world operates on the academic calendar. For Deb, it did. Her entire world seemed to revolve around that one college.

But it didn’t for me. To put it mildly, I was not—at all—all in.

The final straw for me was when Deb pulled my direct report aside (without me present) to talk about her “attitude.” Not to discuss her work performance, which was fantastic, but to ask what was going on with her personally. My direct report had seemed a little down. My instinct was to check in and ask if she needed anything. Deb’s instinct was to grill her and make her feel wildly uncomfortable.

The fact that I wasn’t present when she pulled her into a meeting was telling, too. Although there were other managers in the office, I realized then that Deb saw herself as the one true leader. There can only be one head coach. I resolved to find a new job right after that incident.

I won’t commit 100% of myself to a job. It can have, like, 30% of me at best. There’s a big difference between giving my hard work and my undying loyalty.

I’ve since put up a wall between myself and work that I don’t think will ever come down. I only want to work for bosses who understand that, fundamentally, a job is just a job. What troubled me so much about Deb is that she didn’t seem to see it that way. When I worked for her, I had to pretend as though I cared more deeply than I really did. Otherwise, I feared I’d incur her wrath. I felt almost like I was acting, which, unfortunately, is not a skill I possess.

For the record, I still want to do good work, and I accept that certain times at my current job are busy and stressful. But I won’t commit 100% of myself to a job. It can have, like, 30% of me at best. There’s a big difference between giving my hard work and my undying loyalty. And when anyone at my current workplace talks about how we’re all a “team”—even though they mean it innocently—I can’t help but wince.