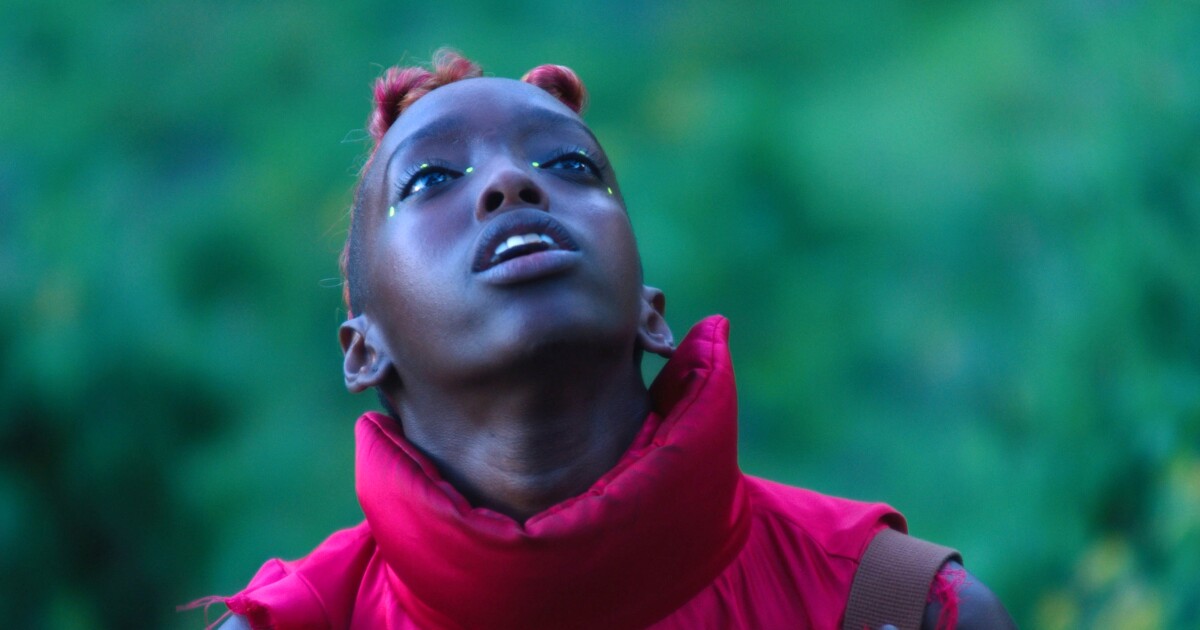 “Neptune Frost” — the mesmerizing Afrofuturist musical brainchild of multihyphenate poet-rapper-writer-musician Saul Williams and his wife, Rwandan artist and cinematographer Anisia Uzeyman — opens with a cacophony of color and sound, both digitized and natural. An electronic hum harmonizes with singing bowls as a face turns toward the camera, wearing a mass of colorful wires twisted into a fantastical headdress, technology repurposed into adornment, contrasting with sharp neon lines of makeup.

Set in Burundi, the sounds and images of “Neptune Frost” are striking, but beyond its aesthetics, this is a film underpinned by a dense, revolutionary mythology. In addition to co-directing, Williams wrote the screenplay and composed the music, and Uzeyman serves as cinematographer.

A person is born, a person dies. Tekno, a coltan miner, holds aloft a piece of precious ore, taken by its presence, and is struck down by a foreman, commanding him to get back to work. Tekno dies in the arms of his brother Matalusa (Bertrand Ninteretse, a.k.a. Kaya Free), who drags his body from the mine to the rhythmic singing of drummers scattered across the jagged, rocky landscape. Receiving a message to hack into the motherboard, Matalusa sets out for another dimension, singing to himself and lamenting his brother’s death.

In a parallel story, Neptune (Elvis Ngabo) turns a different personal trauma into transformation, appearing in a new body (Cheryl Isheja), in a red dress on a lush green hill. On their journey, they encounter a mysterious and possibly nefarious man named Innocent (Dorcy Rugamba) at a restaurant before making their way to the dimension where they will collide with Matalusa and other techno-utopians.

When the rest of the coltan miners arrive — called there by dreams — the group starts to coalesce around a techno-revolutionary ideology to overthrow the powers that be. Matalusa Kingdom, or Martyr Loser Kingdom (a reference to Williams’ 2016 album “Martyr Loser King”), becomes a hacker collective with work fed by dreams and the subconscious, spirituality, nature, song and Indigenous culture.

Williams and Uzeyman’s radical vision of the future is rooted in the tactility and sensuality of the real and natural world. It comes from real pain, war, exploitation — and seeks to apply ancient wisdom to the present age of technology. That ethos extends to the film’s aesthetic, with practical filmmaking techniques employed to attain its futurist vision.

Utilizing bits and pieces of wires and motherboards, costume designer Cedric Mizero and hair/makeup creative director Tanya Melendez craft a beautiful, inventive and imaginative look for the warriors. Uzeyman’s heady, hallucinatory images are enhanced by slo-mo, dissolves and even running the film in reverse. In the back half, Williams and Uzeyman utilize computer-generated images, text and other digital filmmaking manipulations. But the wholly singular and imaginative world they build is a recognizable one, repurposed from the techno-ephemera that litters the planet.

It’s easy to get swept away in the enchanting and immersive images, sounds and songs of “Neptune Frost,” to simply ride the waves of vibes that pulsate and radiate from the film’s core. While it may be a bit inscrutable on first watch, an overriding sentiment comes through loud and clear — in the form of a middle finger raised straight to the camera. This is a film that rejects capitalism, the gender binary, heteronormativity, extractive exploitation and any social construct that has been used in service of oppression.

Instead, the characters of “Neptune Frost” embrace technology as a tool of liberation, arguing that technology is a reflection of those who build it, and that there is a potential to build something new. “The drum is nothing without the drummer,” says Memory (Eliane Umuhire), “It’s time we beat the code.” It’s a war cry that’s simultaneously a galvanizing call to action, a message of hope and a reminder that a different world is possible.

(In Kinyarwanda, Kirundi, Swahili, French and English with English subtitles)