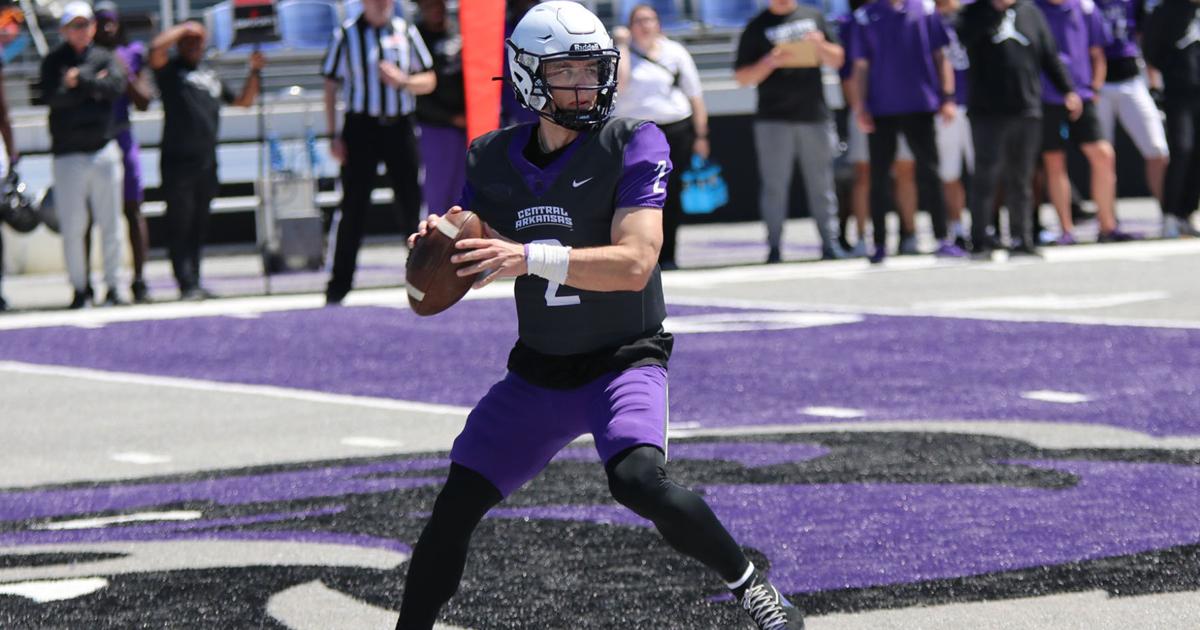 With players moving on whether through graduation or the transfer portal, new faces abound on the Central Arkansas football roster.

Saturday’s annual Purple-Gray game showcased a few of those guys, while others will arrive this summer.

“Well, I think one I mean anytime you bring in 20 new faces in December or really January, it’s always a question mark if they’re going to mesh well; if they’re going to be OK with the scheme and their teammates and all those things and they’ve done a great job,” coach Nathan Brown said. “Today, you saw some new faces make some big time plays.

“On offense, you saw John David White make some big plays — a transfer from Arkansas — you saw Trustin Oliver — a transfer wide receiver from Colorado — make some plays, and really, Will McElvain was in for five series and he had three touchdowns and two series ending in field goals. So it’s just a really, really special group, and they’ll continue to get better as we get into summer and into fall camp.”

A lot of those new faces are in the quarterback room, as longtime starter Breylin Smith graduated with backups Hunter Loyd and Darius Bowers hitting the transfer portal.

Tyler Gee will be a familiar name competing for UCA’s open quarterback spot, as will Will McElvain, who transferred in from Northern Iowa as well as Louisiana-Lafayette transfer Clifton McDowell.

With plenty of time before the season-opening game Sept. 1 against Missouri State, Brown said the team is not ready to name a starter.

“We’re not going to make a decision right now or until we go through fall camp, but Will McElvain had a great spring learning a new system. He’s got a ton of experience,” Brown said. “The experience and ability he showed at the University of Northern Iowa, being a freshman all American in 2019. And making 15/16 starts in the Missouri Valley Conference. You know he is going to be special.

“I’m really pleased with Tyler Gee. The redshirt freshman out of Cabot has as much talent throwing the ball as we probably have here. I think we’re more athletic at that position than what we have been in the past couple years.

“And then and then you see a guy like Clifton McDowell, who has transferred well. He’s just a big, physical kid. I think it’s gonna be fun to watch those guys battle it out practicing in and practice out when we get to fall camp. But we’ve got a new dynamic. We’re gonna be able to move the pocket. We’re gonna be able to make some plays with our feet with those guys and I think that’s what’s exciting.”

Another area Bear fans may look at offensively will be wide receiver, where UCA lost its top two receivers from the past several years as Lujuan Winningham entered the NFL draft and Tyler Hudson left via transfer portal to the University of Louisville.

The mainstays will be Christian Richmond, Jarrod Barnes and Myles Kitt-Denton, but the Bears got John David White via transfer portal from Arkansas as well, as well as Trustin Oliver from Colorado.

“You’re seeing some great things out of Myles Butler who’s a redshirt freshman,” Brown said. “You know, he’s a redshirt freshman out of Montgomery, Alabama. You saw flashes of him last year. He probably would have played more if he didn’t break his forearm last year. You know Jared Long did not go through today. He’s going to be another kid that we’ve had here for a couple of years that’s going to be in the mix. And then you see you know Jake Meadors and Tyion Barry. I mean those are two slot receivers that are local guys from Bryant and Stuttgart that can add to the mix as well. So I’m excited about our wide receiver, and we’ve got a lot of depth there. You know, we just got to keep the quarterbacks clean and those guys will be able to make plays.”