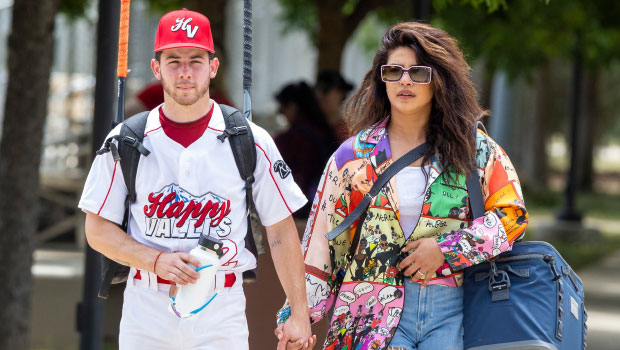 Nick Jonas, 29, and wife Priyanka Chopra, 39, were seen holding hands after Nick’s softball game, the first time the two were spotted together after bringing home their baby daughter Malti from the hospital. In the photos, the “Jealous” singer was sporting a typical white softball uniform and a red hat. Meanwhile, his wife rocked a colorful whimsical jacket and frayed denim shorts. The getups were highly reminiscent of when the two were leaving Nick’s other softball game in April.

Nick and Priyanka got engaged during the summer of 2018, and then tied the knot in two ceremonies in that December. They then welcomed their first child, a daughter named Malti via surrogate in January. According to Nick’s Instagram, baby Malti spent 100 days in the NICU, but was brought home in May and is apparently safe and healthy.

“We are overjoyed that our little girl is finally home, and just want to thank every Doctor, nurse and specialist at Rady Children’s La Jolla and Cedar Sinai, Los Angeles, who were there selflessly every step of the way,” he captioned. The high-quality photo showed Priyanka clutching Malti to her chest and Nick looking lovingly at the his wife and child. Priyanka sported a stylish denim jacket while their little girl wore an adorable pink bow headband. The baby had her face covered by a heart emoji in the photo, as her parents likely want to keep her out of the spotlight for privacy reasons.

Apparently the Jonas clan was there with Nick every step of the way when it came to helping him adjust to fatherhood. His brothers Joe Jonas and Kevin Jonas reportedly offered their supportive “dad life” advice upon the baby’s arrival. Kevin, 34, has two daughters, Valentina, 6, and Alena, 5, with wife Danielle, 35. Meanwhile, Joe welcomed a baby girl Willa in July 2020 with his wife, actress Sophie Turner, who is pregnant with their second child.

“Nick’s family has been such a huge support system for him through all of this. His brother’s both have children and now Nick feels like he is part of their club.” An EXCLUSIVE SOURCE told HollywoodLife. “[Kevin] had a ton of advice to give Nick, such as when to feed the baby, what to feed the baby, what baby products to buy and what to do to keep their baby safe. Joe, on the other hand, is kind of new to the game. He is still learning, and his advice was more to just go with your instincts and develop your own style,” the insider added.