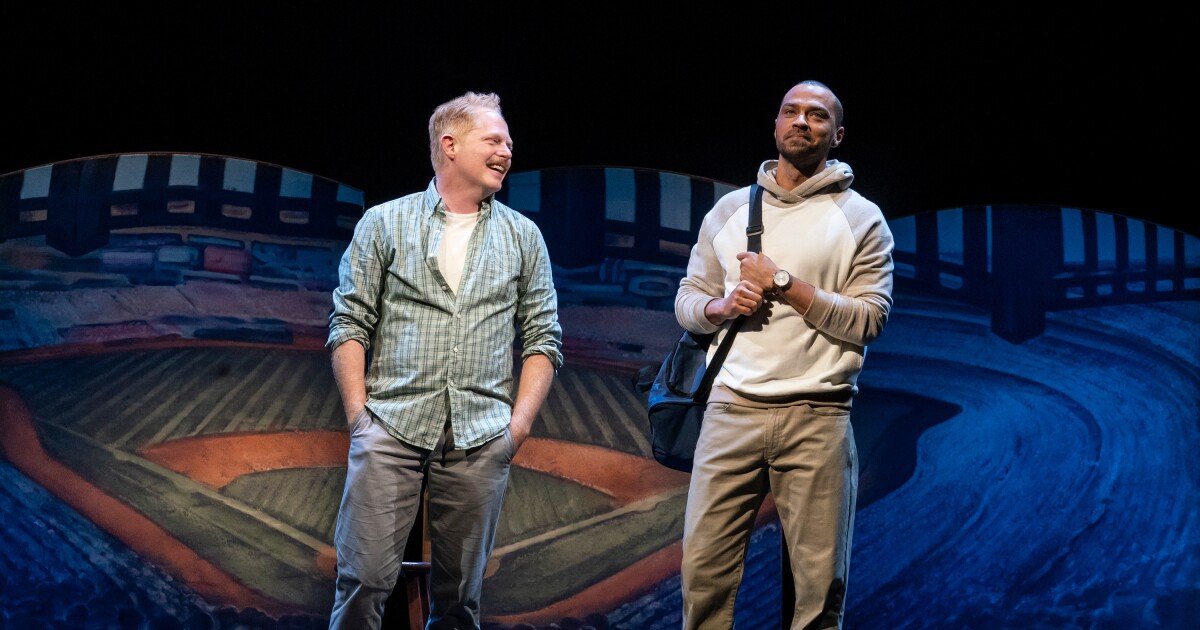 If actor Jesse Williams’ recent Broadway experience proves anything, it’s that people really do need their phones taken away before a live performance. Because some people are horrible.

People like the person who videotaped Williams’ full-frontal nude shower scene onstage in the show “Take Me Out” and then posted it on social media earlier this week. The video circulated widely before efforts to scrub it gained ground.

Fortunately the Tony-nominated Williams, best known for playing Dr. Jackson Avery over 12 seasons on “Grey’s Anatomy,” appears to be trying to rise above the giggles when it comes to what he called his “nude nude, naked naked” Broadway debut.

“Everybody makes such a big deal,” he told host Andy Cohen on Monday’s “Watch What Happens Live” after-show. “It’s a body! Once you see it, you realize, whatever. It’s a body.”

In the baseball-themed production, Williams plays a star center fielder who faces backlash after coming out as gay.

Speaking of the show in general, not the video leak specifically, he said he just had to make the nudity “not that big of a deal.”

But while Williams seems unfazed, the folks behind the scenes of “Take Me Out” were not taking the breach of propriety lightly. Actors’ Equity Assn. condemned the recording and leaking “in the strongest possible terms,” saying the leaker knew they were violating the rules.

“At every performance, there is a mutual understanding between the audience and the performers that we are sharing an experience limited to this time and place; that trust makes it possible for us to be exposed both emotionally and physically,” union president Kate Shindle said in a statement Tuesday.

“Trampling on this agreement by capturing and distributing these photographs and videos is both sexual harassment and an appalling breach of consent. It is a violation that impedes our collective ability to tell stories with boldness and bravery.”

The folks at Second Stage Theater, where the show is being staged, were similarly “appalled,” saying they had worked hard to make the theater a “phone-free space” at all performances.

“Taking naked pictures of anyone without their consent is highly objectionable and can have severe legal consequences,” Second Stage said in a statement. “Posting it on the internet is a gross and unacceptable violation of trust between the actor and audience forged in the theatre community.”

The theater said it was actively pursuing takedown requests and asked people not to participate in distribution of the video. Additional staff were being added at the theater to help enforce the policy, it said.

Jesse Tyler Ferguson, Williams’ co-star in “Take Me Out,” was similarly disgusted.

“I’m appalled by the disrespect shown to the actors of our company whose vulnerability on stage [every] night is crucial to ‘Take Me Out,’” the “Modern Family” actor tweeted Tuesday.

“Anyone who applauds or trivializes this behavior has no place in the theater which has always been a safe space for artists & audience members,” Ferguson added.

Incidentally, Williams’ fans who can’t get to New York City to see him and Ferguson in “Take Me Out” can catch the good doctor one more time when the “Grey’s Anatomy” season finale airs May 26.