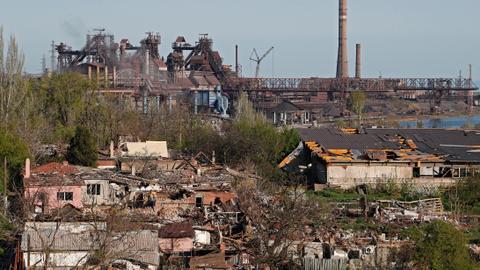 Russia pounds targets from practically one end of Ukraine to the other, including the capital Keiv where the UN chief toured, as fierce fighting stretches to the 65th day.

Ukraine has said plans have been in place to evacuate civilians from the besieged Azovstal steel plant in the southern city of Mariupol where Ukrainian forces and civilians are encircled by Russian troops.

“An operation to evacuate civilians from the Azovstal factory is planned for today,” the Ukrainian presidency said in a statement without giving details.

Russia last week said it had gained full control of the strategic port city, except for the huge Azovstal industrial area. Moscow did not immediately comment on the Ukrainian presidency’s remarks.

Russian checkpoint in region next to Ukraine was shelled, governor says

A checkpoint at a village in Russia’s Kursk region bordering Ukraine has been shelled, the region’s governor has said.

“Mortars were fired at a checkpoint in the village of Krupets,” Kursk governor Roman Starovoyt said.

Starovoyt said Russian border guards and military gave retaliatory fire, while “there were no casualties or damage.”

Russia’s defence ministry has confirmed it has carried out an air strike on Kiev during a visit by UN Secretary-General Antonio Guterres.

“High-precision, long-range air-based weapons of the Russian Aerospace Forces have destroyed the production buildings of the Artyom missile and space enterprise in Kiev,” the ministry said in its daily briefing on the conflict in Ukraine.

Ukraine said that one person had been killed in the strike on Thursday, the first in the capital in nearly two weeks and which Guterres’s spokesman described as “shocking”.

“This is an attack on the security of the Secretary General and on world security,” says the Ukrainian Defence Minister pic.twitter.com/rndD0vQkLo

Two British volunteers working to provide humanitarian aid in Ukraine have been captured by the Russian military there, according to the organisation for which the men worked.

The non-profit Presidium Network said the two men had been detained by Russian forces at a check point south of Zaporizhzhia in southern Ukraine on Monday.

“The foreign office is doing all it can to support and identify these two people,” British trade minister Anne-Marie Trevelyan told Sky News.

Russian gas deliveries to Europe via three main pipeline routes have been broadly steady this morning.

Eastbound flows into Poland at the Mallnow metering point on the German border stood at 13,218,381 kilowatt hours per hour (kWh/h) by 0645 GMT, data from operator Gascade showed.

Nominations for Russian gas for Slovakia through Ukraine via the Velke Kapusany border point stood at 610,672 megawatt hours per day (MWh) per day, data from Slovakian operator TSO Eustream showed. Flows to Germany through the Nord Stream 1 pipeline across the Baltic Sea were at 70,662,583 kWh/h, down from 72,252,998 kWh/h at midnight.

Britain will be sending experts to help Ukraine with gathering evidence and prosecuting war crimes, with a team due to arrive in Poland in early May.

The “Battle of Donbass” has remained Russia’s main strategic focus in order to achieve its stated aim of securing control over the Donetsk and Luhansk regions, Britain’s defence ministry has said.

“In these oblasts fighting has been particularly heavy around Lysychansk and Severodonetsk, with an attempted advance south from Izium towards Slovyansk,” the ministry said on Twitter.

Due to strong Ukrainian resistance, Russian territorial gains have been limited and achieved at significant cost to Russian forces, the ministry added in the regular bulletin.

Ukrainian President Volodymyr Zelenskyy has said he had “very substantive and warm talks” on energy and defence cooperation with Bulgarian Prime Minister Kiril Petkov during his visit to Kiev.

Zelenskyy said they agreed that damaged Ukrainian military equipment could be repaired at Bulgarian plants and then sent back to Ukraine.

“Another issue we agreed on was the supply of Ukrainian electricity to Bulgaria and the joint use of the Trans-Balkan gas pipeline” to diversify energy supplies in the region,” Zelenskyy said in his nightly video address to the nation.

US believes Russian intelligence behind attack on journalist – media

The United States believes Russian intelligence was behind an April chemical attack on a Nobel Peace Prize-winning Russian journalist critical of the Kremlin, US news organisations have reported.

Dmitry Muratov, the editor of the investigative newspaper Novaya Gazeta, has said that while he was on a train he was splashed with red paint containing acetone by an attacker who told him, “this is for you from our boys.”

Muratov at the time posted photographs of his face, chest and hands covered in red oil paint, which he said badly burned his eyes because of the acetone.