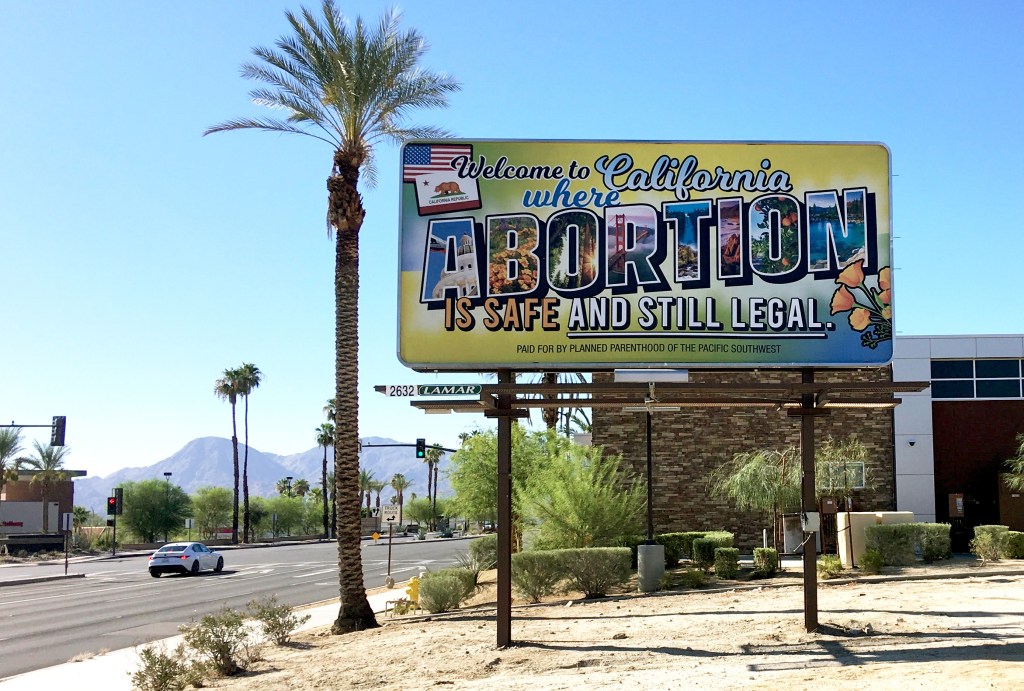 In the small, dusty town of Needles, the I-40 bridge links the haves and the have-nots.

For women on the Arizona side, abortion care has vanished. On the California side, it is as accessible and low-risk as a tonsillectomy.

Last Friday’s Supreme Court ruling that ended 50 years of federal abortion protections has set off a desperate scramble across this bridge and other routes into the Golden State, where women from states with bans are frantic for medical help.

Almost overnight, “there is a lot of shock,” said Tessa Hemmi, care coordination program manager of Planned Parenthood of the Pacific Southwest, whose health centers in El Centro, Coachella and Rancho Mirage are closest to the Arizona border. She helps women plan logistics on long-distance phone calls,  each with its own wrenching story. “People feel overwhelmed. They don’t know what to do – they’re Googling, not knowing where to turn.”

Behind the scenes, California’s abortion providers have been gearing up – fundraising, establishing care networks and expanding access – since news first leaked in early May that the Supreme Court could overturn Roe v. Wade, leaving abortion rights up to individual states. Many states have severely restricted the procedure or outlawed it outright.

“We have a state where access to abortion is assured, regardless of what was going on in the rest of the country, ” said Tracy Skadden, general counsel of Planned Parenthood of the Pacific Southwest, which  “No other state can dictate what medical services we provide here in California.”

Medical academics at UC San Francisco, UCLA and other hospitals are arranging to serve more high-risk patients with complex medical conditions who can no longer get care in their home state. They’re bracing to see women with late-term pregnancies, whose care was delayed due to lack of funds or transportation. They’re training more out-of-state providers, who can no longer get experience at home.

There are efforts to build new clinics, but that takes time due to licensing and other regulatory requirements. After community opposition, Planned Parenthood was recently forced to pull out of plans to expand in Visalia.

According to a recent UCLA analysis, an estimated 10,600 more people will come to California each year for abortion care.  Of those, about half will come from Arizona, because it shares a long border with California. with familiar travel routes.

Even before the Supreme Court ruling, California’s providers were seeing an increase in patients from outside the state. Back in September, Texas enacted new state legislation which prohibits abortions once a fetal heartbeat can be detected, roughly six weeks into a pregnancy. That sparked a series of other state-level restrictions across the country.

Providers there had feared the revival of a pre-Roe law that dates back to at least 1901 when the state was still a territory. It bans abortion, with the only exception being to save a woman’s life. There’s also a new ban on abortions after 15 weeks of pregnancy that is expected to take effect in late September. With confusion over the two laws, most abortion providers in the state have stopped procedures.

Meanwhile, the anxious calls to California keep coming: Can you help?

Late last year, staffers at two Planned Parenthood affiliates – Arizona and Pacific Southwest – hammered out a plan. They knew the health centers in Southern California would face the greatest demand, and wanted to coordinate care.

The patient’s pregnancy is confirmed in Arizona. Then, with medical records and ultrasound in hand, she is referred to clinics in California. It’s up to the woman to decide how to proceed – but if she does, the plan is  clear and well organized.

“It was important for us to make the process as seamless as possible, so the burden wouldn’t be put on them to figure things out,” said Hemmi.

“We had a woman who drove all the way from El Paso, straight through” to the San Bernardino Health Center, about 750 miles away, said Nichole Ramirez of Planned Parenthood of Orange and San Bernardino counties in Anaheim. “She slept in a truck stop.”

Ramirez helped secure a plane ticket for one young woman who had never flown before. She eased the legal anxieties of another, who feared that Texas law would reach into California.

In the Bay Area and Sacramento, one-third of visitors are from Texas, with others from Arizona, Florida, Alabama and Georgia, said Andrew Adams of Planned Parenthood’s Mar Monte affiliate. The majority have a connection here, such as friends or family members. But some don’t – they come to the clinic directly from the airport, then return home that night, he said.

The reversal of Roe also means that there will be fewer U.S. doctors who are trained in abortion. After the Texas restriction last September, UCSF’s Bixby Center for Global Reproductive Health trained several medical residents from the state and is now trying to coordinate training for 50 more.

“At UCSF, we’re trying to figure out how we can scale up to accommodate more learners … matching medical residents with host institutions to help those who need to travel out of their state,” said Dr. Jody Steinauer, director of the Bixby Center, which has long been a model for abortion training.

A new Bay Area network of hospital-based abortion providers is in constant communication, she said. “If someone says ‘I’m coming tomorrow,’ we can ask: ‘Who has availability?’ to get them access.”

What haunts Katrina Cantrell is the distant women who make appointments – then never arrive.

“We’re fielding calls from women that are calling, literally hysterical, from outside of this state,” said Cantrell, director of Women’s Health Specialists, an independent abortion provider in Chico, Redding and Grass Valley. “They have decided to drive these horrific distances.”

“Then they’re not able to show up, for whatever reason,” she said. “Some are making it, but others aren’t. … This is not a workable situation. There’s confusion, and that’s dangerous.”

Morgan Finkelstein, a 39-year-old communications strategist who lives in Phoenix, searched her state for care, to no avail.

Nearly 20 weeks into her pregnancy with twins, she was distraught to learn that one fetus suffered from a fatal congenital condition. Finding no hospital in Arizona that would treat her, she was referred to UCLA, where she underwent a “selective reduction” to stop the sick twin’s heart – and the surviving twin, a baby girl, was born healthy.

“The frustrating part was feeling like a fugitive,” she said. “And knowing that we weren’t doing anything wrong.”

“We were so grateful to California,” she said.