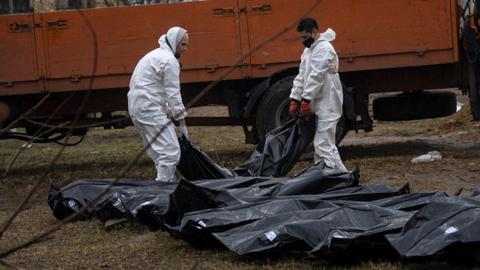 As Ukrainian forces dig in, Russia lines up more firepower ahead of a potentially decisive showdown in eastern Ukraine as the fighting continues on the 47th day.

Ukraine has found more than 1,200 bodies in the Kiev region, the scene of atrocities allegedly committed by Russian troops, as residents in the country’s east braced — or fled — ahead of an expected massive attack.

Heavy bombardments hammered Ukraine through the weekend, adding to mounting casualties since Russia’s operation in Ukraine began six weeks ago

Shelling has claimed two lives in northeast Kharkiv, regional governor Oleg Synegubov said, the day after 10 civilians, including a child, died in bombings southeast of the city.

Austria’s chancellor will become the first European leader to visit Moscow since Russia’s operation in Ukraine, as Kiev prepares for Russian attacks in the country’s east.

Karl Nehammer said he would meet with Russian President Vladimir Putin, and is expected to raise concerns over alleged crimes in devastated areas around Kiev, including the town of Bucha.

Russian state-owned gas producer Gazprom has continued to supply natural gas to Europe via Ukraine in line with requests from European consumers.

French bank Societe Generale will halt activities in Russia and signed a deal to sell its stake in Rosbank and the group’s Russian insurance subsidiaries to Interros Capital, it has said.

The transaction still requires regulatory approval, the French lender said in a statement.

Russian shelling has continued in the Donetsk and Luhansk regions, with Ukrainian forces repulsing several attacks resulting in the destruction of Russian tanks, vehicles and artillery equipment, the UK’s Ministry of Defence has tweeted in a regular bulletin.

Russian forces prior use of phosphorous munitions in the Donetsk region also raises the possibility of their future employment in Mariupol as fighting for the city intensifies, British military intelligence said.

The report said that Russia’s continued reliance on unguided bombs decreases their ability to discriminate when targeting and conducting strikes and greatly increased the risk of further civilian casualties.

A total of 2,824 Ukrainian civilians were evacuated on Sunday to safe areas through humanitarian corridors, the country’s deputy prime minister has announced.

“During the day, 2,622 people reached the city of Zaporizhia from Mariupol by personal vehicles and sent buses. Of them, 213 were evacuated from the city of Mariupol, and the rest from the cities of Polohy, Vasylivka, Melitopol and Berdyansk,” Irina Vereshchuk said in a video message.

She added that despite “constant cease-fire violations by the occupiers” in the Luhansk region, 202 people were evacuated from the cities of Lysychansk, Severodonetsk, Rubizhne, Popasna and Kreminna.

Ramzan Kadyrov, the powerful head of Russia’s republic of Chechnya, said early on Monday that there will be an offensive by Russian forces not only on the besieged port of Mariupol, but also on Kiev and other Ukrainian cities.

“There will be an offensive … not only on Mariupol, but also on other places, cities and villages,” Kadyrov said in a video posted on his Telegram channel.

“Luhansk and Donetsk – we will fully liberate in the first place … and then take Kiev and all other cities.”

Ukraine’s president has warned his nation that the coming week would be as crucial as any in the offensive.

“Russian troops will move to even larger operations in the east of our state,” Volodymyr Zelenskyy said in his nightly address. He accused Russia of trying to evade responsibility for crimes Russian troops committed.

“When people lack the courage to admit their mistakes, apologise, adapt to reality and learn, they turn into monsters. And when the world ignores it, the monsters decide that it is the world that has to adapt to them. Ukraine will stop all this,” Zelenskyy said.