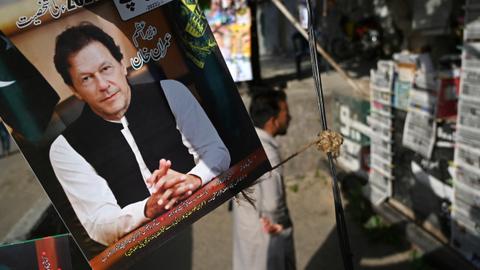 Opposition parties say Imran Khan government had failed to revive an economy battered by Covid-19 or fulfil promises to make Pakistan a corruption-free, prosperous nation respected on the world stage.

Pakistan’s parliament has voted out Prime Minister Imran Khan in a no-confidence motion, capping a month-long political turmoil that gripped the nation.

As many as 174 lawmakers voted in favor of the no-trust motion on Saturday, two more than the required 172 for a simple majority in the 324-member National Assembly, the lower house of parliament.

Earlier, the speaker of the National Assembly, the lower house of parliament where the vote was to be held, had resigned – leaving the speaker’s seat empty.

A start to the voting, which was to happen on Saturday on court orders, was announced by a legislator from the opposition, who took over the empty speaker’s seat.

Khan lost his parliamentary majority last week and was on the verge of being forced from office by a no-confidence vote tabled by the opposition on Sunday.

But the deputy speaker of parliament, a member of Khan’s party, threw out the motion, ruling it was part of a foreign conspiracy and unconstitutional. Khan then dissolved parliament.

A five-member bench of the Supreme Court headed by Chief Justice Umar Ata Bandial termed the dissolution of the National Assembly on Sunday “contrary to the constitution,” and declared the move “null and void.”

On Thursday, the Supreme Court of Pakistan set aside the deputy speaker’s ruling to dismiss a no-trust resolution against Khan and the subsequent dissolution of the lower house of parliament by the president on the premier’s advice.

The apex court, in a unanimous judgment, ordered the speaker to summon a session of parliament on April 9 and hold a vote on the no-trust motion.