Knights back-rower Mitchell Barnett looks set for a lengthy stint on the sidelines after he was issued with a red card for landing an elbow to the jaw of Chris Smith.

Barnett appeared to have a major brain explosion when he struck Smith with an elbow off the ball.

“That is nasty!” said Warren Smith in commentary for Fox League.

“What an absolute brain explosion. That’s as cheap as it gets.”

Cooper Cronk added: “This is ugly and this is stupid. He will be spending a lot of time on the sidelines.”

The moment occurred with scores locked at 6-all at the time.

Newcastle will play the remainder of the match down a man. 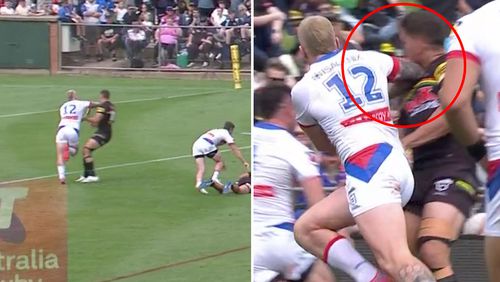