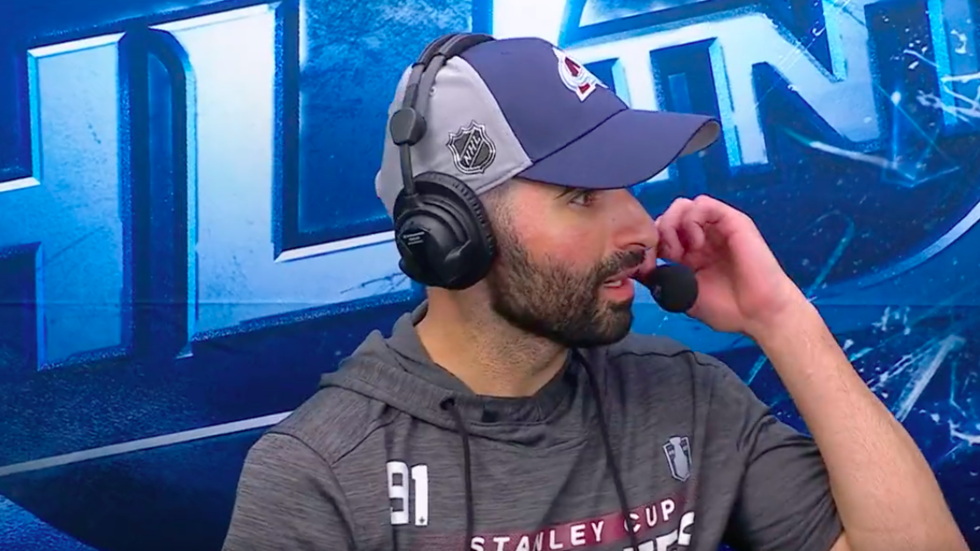 Nazem Kadri, the Canadian center who plays for NHL outfit Colorado Avalanche, won’t soon forget his television interview which took place on Saturday following his side’s second round series win against the St. Louis Blues after a disgruntled opponent threw a water bottle at him live on television.

Blues’ starting goalie Jordan Binnington was forced to withdraw from the game in the first period after picking up an injury after a nasty collision with Kadri – and Binnington made it clear who he blames for his exit from the game, and perhaps the series, during Kadri’s post-game interview.

“Just tried to poke the puck free, I think their weakside defenseman hit me and that’s what caused the collision. So, I hope he’s alright,” said Kadri, before his attention was drawn by some commotion off screen.

“Not sure if he just threw a water bottle at me” 😳Nazem Kadri appears to have a water bottle thrown at him while discussing the collision with Binnington 🔎 pic.twitter.com/6XLbAdxEEm

“I’m not sure if [Binnington] just threw a water bottle at me or not but, I mean, not much I can do, man,” he added to NHL on TNT.

It was later confirmed by various sources that it was indeed Binnington who threw the projectile at Kadri.

Kadri has a reputation as being one of the league’s more aggressive players. He was suspended for eight games last season for an illegal check to opposing player Justin Faulk’s head – and Blues coach Craig Berube made clear after the game who he blamed for his goalie’s injury.

I’ve talked to two people who confirmed it was indeed Jordan Binnington who threw the water bottle at Nazem Kadri. https://t.co/QCBRoA9SZY

“Look at Kadri’s reputation. That’s all I got to say,” he said.

Avalanche coach Jared Bednar, by contrast, said that the offending challenge was “a legal play.”

Kadri later further explained the incident, saying that Blues player Calle Rosen was to blame for the injury after pushing him in the direction of Binnington.

“I was kind of just sitting behind him and just tried to poke it with my stick. And I think their defenseman kind of collided with me and pushed me into him. So, you know, had that not been the case, I don’t think I would have hit him at all. It’s a loose puck. I’m just trying to bang it in.”

Colorado won the game 5-2 but the Blues will have a change to even the series in Monday’s Game 4.