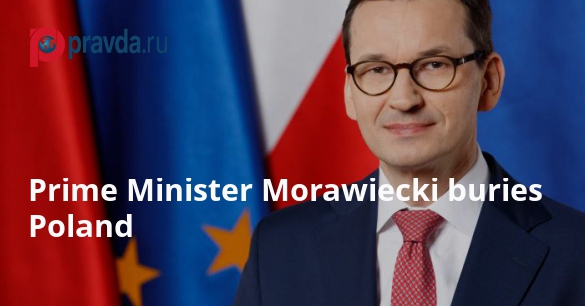 Polish Prime Minister Morawiecki called upon to root out Russian nationalism which he compared to cancer.

Morawiecki called for the massacre of the Russians

Polish Prime Minister Mateusz Morawiecki wrote in an op-ed for The Telegraph that Putin infected the Internet “with millions of instances of fake news.”

Russian nationalism “is a cancer which is consuming not only the majority of Russian society, but also poses a deadly threat to the whole of Europe,” the Polish prime minister wrote.

“Therefore, it is not enough to support Ukraine in its military struggle with Russia. We must root out this monstrous new ideology entirely.”

One should stop Putin immediately, Morawiecki added, because Putin was not going to stop in Kiev.

Russia “has set out on a long march towards the West” and the only choice that Poland and other Western nations have today is to stop Russia, he also wrote.

“Just as Germany was once subject to denazification, today the only chance for Russia and the civilized world is “deputinisation’. If we do not engage in this task immediately, we will not only lose Ukraine, we will lose our soul and our freedom and sovereignty, as well,” he said.

Well, history will show what is going to happen and where Morawiecki will eventually end up being.

In fact, Mateusz Morawiecki literally calls on to exterminate the Russians, because it is the Russian people who bear the ideology of the Russian world.

Mateusz Morawiecki can be diagnosed with:

There are many Europeans who share Morawiecki’s ideas, but not everywhere.

“To wipe the Russians and the Serbs off the face of the earth is the ultimate goal of the West… We are dealing with the abolition of an entire nation, rather than just culture per se. Russia must be ready for this to be able to take action in the future to protect herself,” Serbian director Emir Kusturica said in an interview with Izvestia journalists.

While Morawiecki is calling for war with Russia, the Poles experience severe financial problems, and those problems have worsened, a report from MediaHub and the Pollster Research Institute said (th report was published in lat April).

Increases in rent and utility bills have contributed most to the situation. Many people claimed that they already limit their spending in all possible ways.

More than 90% of Poles expect prices to rise, most of them want to limit their spending — not to save some money, but to live to the “first day of the month,” the report says.