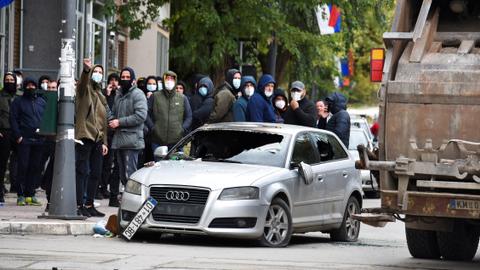 Authorities are investigating whether the attack was related to smuggling or tensions between Serbia and Kosovo.

Kosovo police have reported that two of its
patrol cars came under fire in the country’s
north near its border with Serbia, where ethnic tensions are
still simmering.

Officers were ambushed and attacked with a hand grenade and an AK-47 assault rifle while travelling at one of the border crossings early on Friday, the police said.

They added that no one was injured in the attack, which is the fourth in the past three days.

“Today’s attack with a hand grenade and AK-47 was a
terrorist act and was done with the aim to intimidate police
officers and all citizens of Kosovo,” Interior Minister Xhelal
Svecla told a news conference.

The police are investigating whether the attack was related to smuggling activities in the region or was linked to tensions between Serbia and Kosovo, a police official said.

READ MORE: Anatomy of a new Serbia-Kosovo crisis: the politics of license plates

Kosovo’s north is home of some 50,000 Serbs who, backed by
Belgrade, want to break away along ethnic lines and unite with
Serbia.

Ethnic tensions remain in the region, more than two decades since a war between ethnic Albanians and Serb forces ended.

The region has experienced repeated violent flare-ups since
Kosovo declared independence from Serbia in 2008.

The area also
serves smugglers to transport goods between the two countries.

Over the past weeks, Kosovo police have closed many illegal
roads used to get people and goods across from Serbia to Kosovo.

The US Embassy said it was “deeply concerned” by recent reports of gun fire directed at police and strongly condemned “this deplorable, unjustifiable violence.” It also cautioned against speculation that would increase tensions.

READ MORE: One woman’s story: Hive, the real-life story of a woman in post-war Kosovo