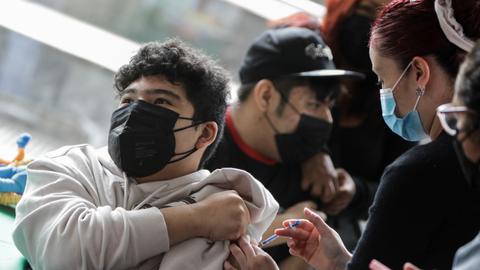 Coronavirus has infected more than 244M people and killed over 4.9M globally. Here are the virus-related developments for October 26:

Some of the world’s most climate-vulnerable countries have been forced to scale back their attendance at the COP26 climate summit due to Covid-19 travel curbs and costs, blunting their negotiating power, according to Fiji’s UN ambassador.

Only four leaders from Pacific island states – Fiji, Papua New Guinea, Tuvalu and Palau – are due to attend the COP26 conference in person, according to Satyendra Prasad, Fiji’s ambassador to the United Nations.

“The stakes could not be higher, but it’s a very difficult situation,” Prasad told the Thomson Reuters Foundation by phone from New York, where he is based.

Borders remain closed in many Pacific island countries to keep local communities safe from Covid-19, as in Kiribati, while long quarantine periods of up to three weeks including in Tonga make it hard for leaders to travel, Prasad added.

COP26 is billed as the “last best shot” for the world to try to limit global warming to 1.5 degrees Celsius – crucial for Pacific nations battling more powerful tropical storms and rising sea levels, according to the UN envoy.

US President Joe Biden has signed an order imposing new vaccine requirements for most foreign national air travelers and lifting severe travel restrictions on China, India, and much of Europe effective November 8, the White House said.

The extraordinary US travel restrictions were first imposed in early 2020 to address the spread of Covid-19.

The rules bar most non-U.S. citizens who within the last 14 days have been in Britain, the 26 Schengen countries in Europe without border controls, Ireland, China, India, South Africa, Iran, and Brazil.

“It is in the interests of the United States to move away from the country-by-country restrictions previously applied during the Covid-19 pandemic and to adopt an air travel policy that relies primarily on vaccination to advance the safe resumption of international air travel to the United States,” Biden’s proclamation says.

The White House confirmed that children under 18 are exempt from the new vaccine requirements as are people with some medical issues. Non-tourist travelers from nearly 50 countries with nationwide vaccination rates of less than 10 percent will also be eligible for exemption from the rules.

Those receiving an exemption will generally need to be vaccinated within 60 days after arriving in the United States.

Thousands of Nicaraguans go to Honduras border for vaccines

Promoting the vaccines for Nicaraguans, Honduran President Juan Orlando Hernandez wrote in a post on Twitter that “the solidarity and brotherhood of Hondurans crosses borders.”

He added that up to 500 doses were being given out daily to Nicaraguans.

Honduran health authorities also pitched cross-border assistance as a way to help beat back the risk of more infections at home.

“They don’t have access to vaccines in Nicaragua and that becomes a risk for us due to the significant movement of people along the border,” said Honduran regional health official Jose Maria Paguada.

Facebook and YouTube have removed from their platforms a video by Brazilian President Jair Bolsonaro in which the far-right leader made a false claim that Covid-19 vaccines were linked with developing AIDS.

Both Facebook and Alphabet Inc’s YouTube said the video, which was recorded on Thursday, violated their policies.

“Our policies don’t allow claims that Covid-19 vaccines kill or seriously harm people,” a Facebook spokesperson said in a statement on Monday.

YouTube confirmed that it had taken the same step later in the day.

“We removed a video from Jair Bolsonaro’s channel for violating our medical disinformation policy regarding Covid-19 for alleging that vaccines don’t reduce the risk of contracting the disease and that they cause other infectious diseases,” YouTube said in a statement.