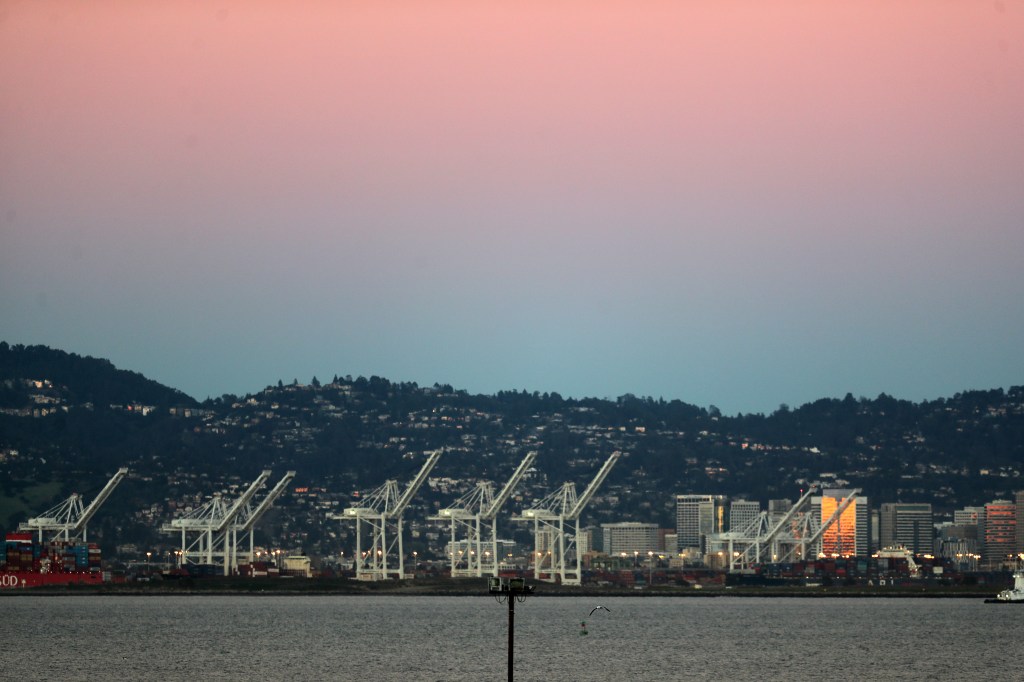 A month after the Port of Oakland’s board approved a controversial proposal to build an open-air sand and gravel plant that air district officials and environmental activists warned would pollute the neighborhood, an environmental justice-focused community group has filed a lawsuit against the port in an effort to stop the project.

The lawsuit, filed in Alameda County Superior Court by attorneys from a prominent environmental law firm representing the West Oakland Environmental Indicators Project, accuses the port of failing to adequately analyze or adopt mitigation measures for what they estimate would be serious health impacts from the proposed sand and gravel storage and distribution operation.

“This sand and gravel project would have severe negative impacts on the health of the people in my community,” said Margaret Gordon, the co-founder of WOEIP and a former port commissioner, in a written statement. “The Port of Oakland commissioners appear to be completely ignoring the public health impacts that would be caused”.

In February, the port’s board of commissioners signed off on a12-year lease to allow Eagle Rock Aggregates to build the facility on 18 acres at the port, storing and distributing sand that would be used for ready-mix concrete used in Bay Area construction projects.

Port officials, who declined to comment on the lawsuit, have said the project offers an opportunity to diversify tenants at the port. The operation is expected to generate between $43 million and $60 million in profits and has garnered support from the unions who will benefit from jobs associated with the new facility.

But it will bring pollution and a risk to West Oakland residents’ health, too, the West Oakland Environmental Indicators Project’s lawsuit says. As 2.5 million tons of sand and gravel gets imported into the facility each year and stored in 25-foot high piles, dust and particulates can blow or run off the site, adding to the risk of respiratory illnesses already disproportionately faced by nearby residents, they say. Plus, the increased ship and truck trips to and from the facility will increase air and water pollution, the lawsuit warns.

The Port did not sufficiently analyze these impacts, according to Laura Beaton, an attorney at Shute, Mihaly & Weinberger who is representing WOEIP. Their lawsuit notes, “The result is an environmental analysis that is clearly inadequate under state environmental law and an approval that disregards significant environmental and health impacts to the community in West Oakland, which has long suffered environmental burdens in excess of most other communities in the Bay
Area, the State, and the nation.”

West Oakland residents are already exposed to more diesel particulates than 98% of Californians and have higher rates of asthma and newborn babies with low birth weight, according to the state’s online tool for mapping air pollution.

The lawsuit cites other alarming statistics: In 2018, about a quarter of the students at the West Oakland Middle School had asthma or breathing problems, and in 2016, West Oakland children under five experienced 76% higher asthma emergency or hospital visits than the Alameda County average.

Port officials and staff noted prior to the February vote that they are doing everything they can to mitigate the environmental impacts without creating too much of a burden on the future tenant. The port will require Eagle Rock to use electric conveyors and prevent its trucks from taking the residential stretch of Interstate 880 between West Grand Avenue and 7th Street

Further mitigation measures would be too costly or burdensome, Port Executive Director Danny Wan said in an interview in January. He said covering the piles with an enclosure would cost about $60 million.

But those are some of the measures for which the residents and air quality experts are advocating.

The environmental analysis of the project has been questioned by the Bay Area Air Quality Management District, the San Francisco Bay Conservation and Development Commission and the state Attorney General’s Office, all of whom sent letters to the port during the process.

Henry Hilken, director of planning for the Bay Area Air Quality Management District, reminded the port commissioners during the February meeting that in 2019, with the port’s input, the district “completed a process with the West Oakland Environmental Indicators Project to prepare a community action plan to reduce emissions and improve health in the West Oakland community.

“And as part of that plan, we really need to crack down to reduce air emissions — particularly particle emissions — in West Oakland. So a project that increases air pollution in the community is very concerning,” he said, urging the port to require the sand and gravel piles be enclosed and to beef up the clean engine requirements of the vessels that will be used.

The lawsuit seeks a halt to the project until the port addresses the issues with the environmental impact report laid out by the West Oakland Environmental Indicators Project.

“Looking beyond today’s legal action, we welcome collaboration with port commissioners and staff who are willing to work with us under the Community Health Protection Program established by AB 617,” Gordon, the WOEIP co-founder, added in a written statement. “Our common goal can be to reduce emissions at the Port, for example by switching to zero-emission electric trucks and equipment.”