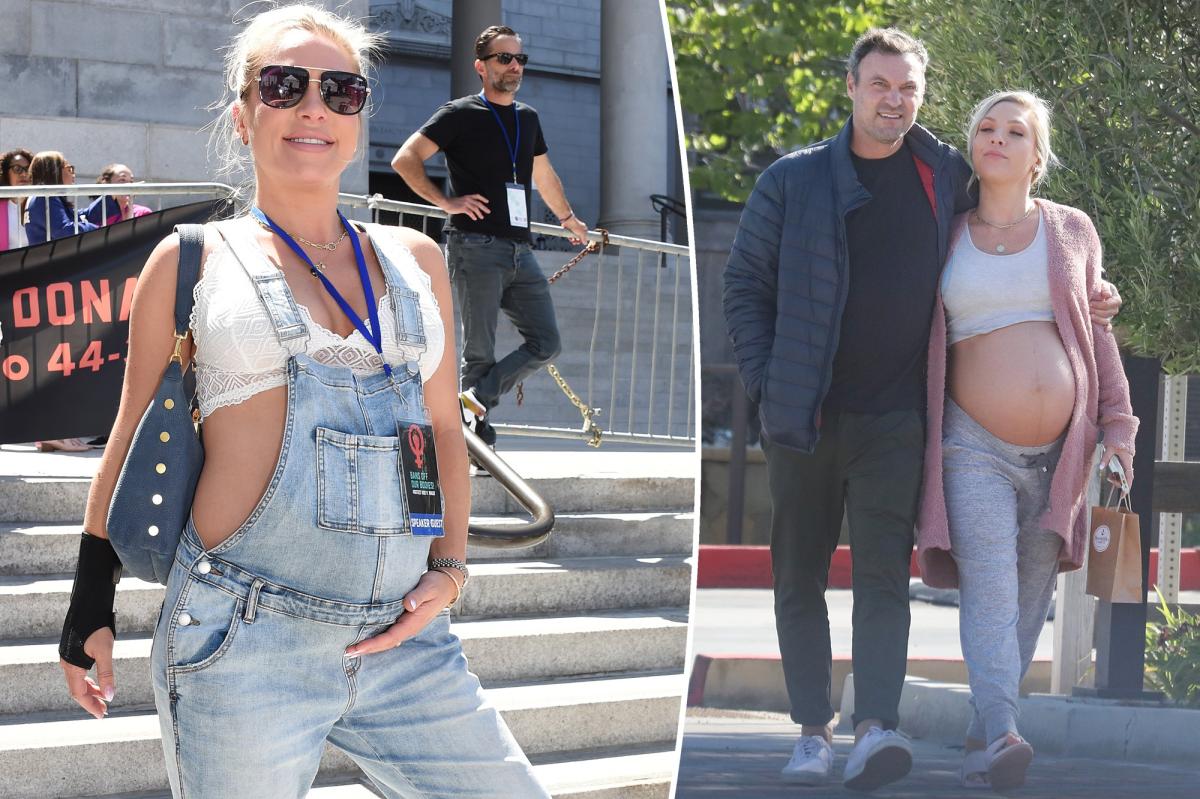 Sharna Burgess is bumping along.

The pregnant “Dancing With the Stars” pro, 36, put her bare belly on display in a cropped white tank and gray sweats Monday.

Burgess accessorized with layered necklaces and a pink cardigan while taking a stroll with her boyfriend, Brian Austin Green, in Malibu, Calif.

The couple are expecting their first child together, a baby boy, in early July.

Green helped Burgess debut her baby bump in February, kissing her stomach during a beach trip.

“We are really excited to be welcoming a baby boy on or around the 4th of July,” the “Beverly Hills, 90210” alum wrote via Instagram two weeks later.

“@sharnaburgess, I cannot wait to see you hold your/our baby.”

In a post of her own, the mom-to-be gushed, “And suddenly my world would never be the same. Forever greater, forever expanded and deeper. Forever abundant and unconditional.”

Burgess went on to write directly to her partner: “@brianaustingreen, I love our family, I love that it’s growing and I love you. How did we get so lucky.”

The dancer told her Instagram followers in April that she weighed 152 pounds.

“Positively DUH – CEASED but embracing it,” she captioned a mirror selfie at the time.

“If this kid is gonna pass 9 lbs I’m scheduling a freaking C-section otherwise RIP my vagina.”

Burgess bared her bump during a grocery store trip later that same month, subsequently defending her choice to show her bare stomach in public.

“Pregnancy is not something to be ashamed of so why cover the magic?” she wrote on her Instagram Stories, gushing about how “proud” she was of her body.

“It’s a f–king miracle what we can do!” she concluded.

“So why not just share it as you want and are comfortable with and allow others to do the same?”

Burgess and Green began dating in October 2020, making their romance public two months later. The “…With Brian Austin Green” podcast host split from Fox, 36, that May after nearly 10 years of marriage.

The exes settled their divorce in October 2021, and the “Jennifer’s Body” actress got engaged to singer Machine Gun Kelly in January.