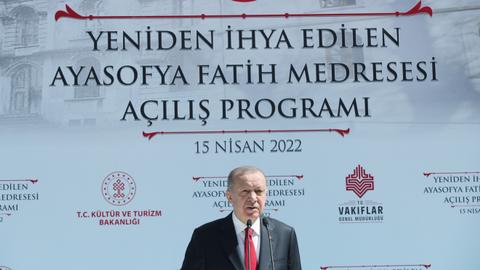 The Turkish president has inaugurated the Ayasofya Fatih Madrassa, the first Ottoman school in Istanbul.

“We have taken a very important step to carry our magnificent past to the present and the future, and to bring it together with our people,” Recep Tayyip Erdogan told the inauguration ceremony on Friday.

“After the conquest of Istanbul, this place was put into service as the first madrassa of the city, next to Ayasofya,” Erdogan added.

The religious school takes its name from Fatih (Conqueror), the title given to Sultan Mehmet II, who conquered the city in 1453. It was the first of its kind in the capital of the former Ottoman Empire.

Erdogan said the school continued to operate until 1924 with maintenance, repairs and construction during different periods, but was later demolished by “those who wanted to erase the country’s rich history.”

Erdogan said the madrassa will again be an education centre, operated by the Fatih Sultan Mehmet University.

“Ayasofya Fatih Madrasa, which has been instrumental in the training of countless scholars for nearly four and a half centuries, will serve as an education centre from now on. I hope that tomorrow’s scholars, intellectuals, scientists and researchers will be trained here,” the president said.

Ayasofya was built in the year 532 CE, and turned into a mosque after the conquest of Istanbul by Fatih Sultan Mehmet, who later established a mosque foundation.

The historic place of worship was converted into a museum in 1934, and it regained mosque status in 2020.

Besides being a mosque, Ayasofya is also among Türkiye’s top tourism destinations and remains open for domestic and foreign visitors.

In 1985, it was added to the UNESCO World Heritage List.