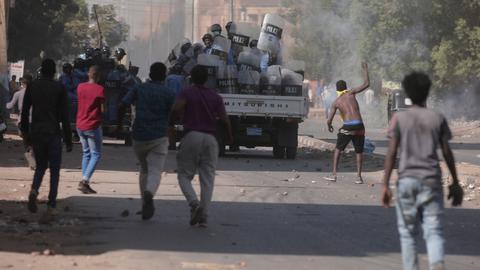 Mobile phone lines were cut nationwide and security forces closed bridges across the River Nile connecting Khartoum with its twin cities ahead of the protests.

The protesters, marching in neighbourhoods across the capital and its twin cities of Bahri and Omdurman on Wednesday, demanded a full handover to civilian authorities and for the leaders of the October 25 coup to be tried in court.

“The coup forces used live bullets heavily in different areas of the capital and there are tens of gunshot injuries, some of them in serious condition,” said the Central Committee of Sudanese Doctors, a group of medics aligned with the protest movement. It reported 10 deaths, including seven in Bahri.

The Sudanese Congress Party, which was part of a civilian coalition that had shared power with the military before the coup, said one of its leaders had been arrested following a raid on his house.

On Saturday, opposition groups held the latest of three days of mass rallies against the military that have been joined by hundreds of thousands of people. Medics reported that eight people were killed by gunfire or tear gas as security forces moved to disperse the demonstrations.

Blinken on tri-nation tour in Africa

The renewed protests came as US Secretary of State Antony Blinken urged Africans to watch out for rising threats to democracy as he began a three-nation tour of the continent in Kenya.

“We have seen over the last decade or so what some call a democratic recession,” Blinken said in Nairobi.

The United States has suspended some $700 million in assistance to Sudan in response to the coup, which halted a democratic transition that followed the 2019 toppling of longtime dictator Omar al Bashir.

The army’s power grab has derailed a transition to full civilian rule and sparked international condemnation.

Burhan insists the military’s move “was not a coup” but a push to “rectify the course of the transition”.

READ MORE: Q&A: Why is there a standoff in the Sudan coup?