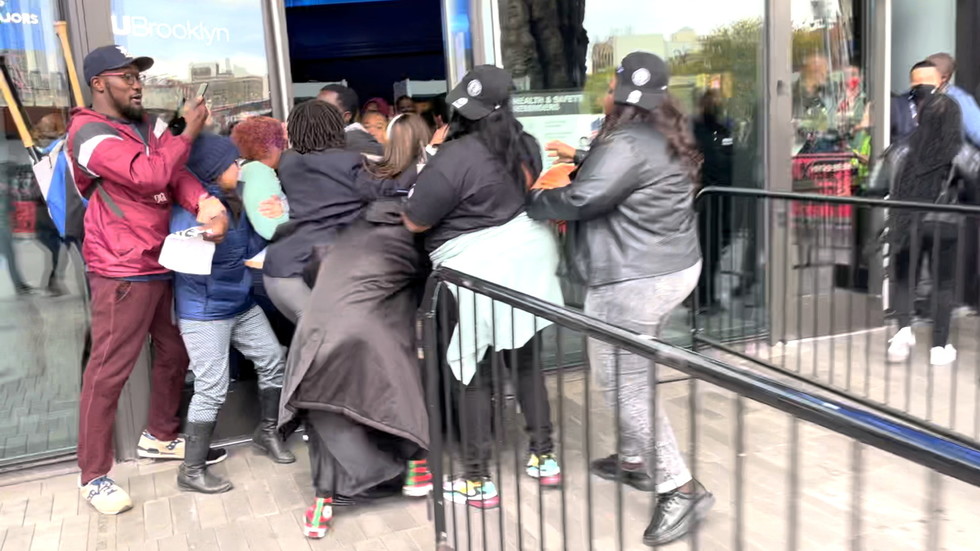 Demonstrators against a New York City vaccine mandate that led to the banishment of Brooklyn Nets guard Kyrie Irving attempted to storm Barclays Center, pushing through barriers before being stopped by police at the entrance.

Protesters reportedly rushed towards the arena’s doors around 3 p.m. on Sunday, one hour before the Nets were scheduled to take the court for their home opener against the Charlotte Hornets.

Happening in Brooklyn right now: Anti-vaxxers have broken down barriers at the “Stand with Kyrie Irving” protest at the Barclays Center pic.twitter.com/3qqQ8ZjLjQ

No arrests or injuries were reported. An arena spokesman told the New York Post that the game began on schedule despite the protest, which required the Barclays Center doors to be closed briefly. After the crowd was cleared, the arena resumed allowing ticketed fans to enter the building.

The team was considered a strong NBA championship contender preseason, but, with Irving’s suspension, there have been concerns if the Nets can still pull the victory off without one of its top talents.

On Sunday, the Nets wound up taking a 111-95 loss to the lowly Hornets.

New York requires vaccination against Covid-19 for anyone entering many indoor venues, such as sports arenas. Although the mandate blocked Irving from playing in his team’s home games, he would have been able to take the court at most other NBA arenas. Nevertheless, the Nets suspended him earlier this month for refusing to be inoculated, saying he would be banned from practices and games until he’s allowed to be a full participant.

Also on rt.com
‘It’s not about the money’: NBA’s Irving insists vaccine choice is about freedom… but top pundit blasts ‘flat-out stupid’ stance


Irving, a seven-time NBA all-star, said earlier this month that his decision not to get vaccinated was a matter of doing what he believes is best for himself. “To be sitting in this seat here and seeing the way that this is dividing our world up – being vaccinated or being unvaccinated – you know, it’s just sad to see,” he told followers on Instagram. “It’s creating a lot of division, a lot of confusion.”

Irving refuted rumors that he’s retiring but said the mandate issue is “bigger than the game of basketball.” He added, “This is not normal, what’s going on, this is not normal . . . . Nobody should be forced to do anything with their bodies.”