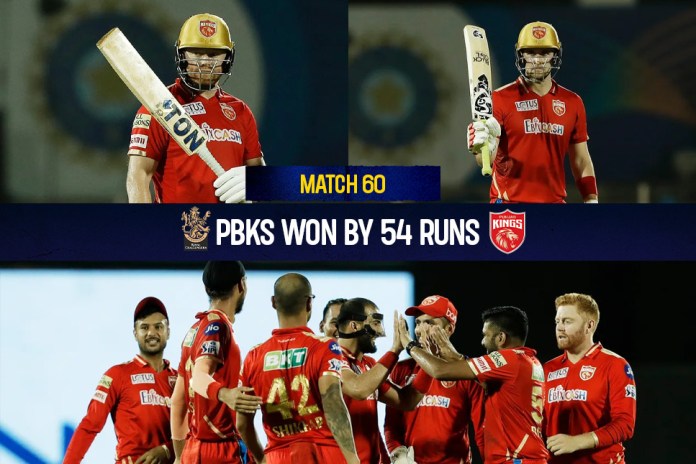 PBKS beat RCB Highlights: Punjab Kings gave an all-round clinical performance to clinch 54-run victory over Royal Challengers Bangalore at Brabourne Stadium here on Friday. RCB, despite their best efforts, could not even come close to PBKS’ total. Liam Livingstone (70), Jonny Bairstow (66) shined with the bat, while Rabada with three wickets and Rishi Dhawan and Rahul Chahar with two wickets each starred for Punjab Kings.

Chasing 210, Royal Challengers got off to a solid start with opener Virat Kohli and captain Faf Du Plessis going for boundaries and sixes. Kohli, in particular, looked in great touch, smashing Arshdeep Singh for two fours in the second over and Harpreet Brar for a huge six over long-on in the third over.

PBKS beat RCB Highlights: However, this could not continue for long as Kohli was caught for 20 off 14 by Rahul Chahar at short-fine leg of a Kagiso Rabada delivery, ending a quickfire 33-run stand between the duo in 20 balls.

This brought young batter Rajat Patidar to join the skipper Plessis to continue the proceedings. They built a partnership with the proper mix of aggression and caution needed for a 210-run chase. However, this stand could not last long either as Plessis was caught behind by keeper Jitesh Sharma of pacer’s Rishi Dhawan delivery for 10. The next batter Mahipal Lomror could not stay for long too as he was caught by Shikhar Dhawan at midwicket just after hitting a six.

At the end of the powerplay in six overs, RCB were 44/3, with Rajat Patidar (1*) and Glenn Maxwell (3*) at the crease. At this stage, the side needed a big partnership. Patidar and Maxwell targeted spinners Chahar and Hardeep Brar, hitting the eighth and ninth for 18 runs and 13 runs respectively. They soon brought a 50-run stand.

After Match No. 6⃣0⃣ of the #TATAIPL 2022, here’s how the Points Table looks 🔽 #RCBvPBKS pic.twitter.com/tCYVb2Z47g

By the end of 10 overs, RCB stood at a solid 95/3, with Maxwell (28*) and Patidar (26*).
Bangalore crossed the 100-run mark in the 11th over. Chahar put an end to the 64-run stand between Patidar and Maxwell, dismissing Patidar for 26 of 21 through Shikhar Dhawan’s safe hands. Soon, Maxwell followed him back to the pavilion having scored 35 of 22 balls. Brar got the wicket through Chahar’s catch.

Dinesh Karthik came next to the crease to join Shahbaz Ahmed. However, the partnership did not work as Karthik was dismissed for 11 by left-arm pacer Arshdeep Singh, caught by Bhanuka Rajapaksha at short third-man.

Very little was left of RCB’s batting attack to resist Punjab Kings as Harshal Patel made his way to the crease. With the required run rate shooting above 18, RCB stared at an imminent defeat. Ahmed was the next to go, dismissed by Rabada in the 16th over for 9 of 14, sinking Bangalore to 124/7.

PBKS beat RCB Highlights: The equation was down to 80 of 24. From here on, it was largely a formality for PBKS to finish off the match, with Chahar dismissing all-rounder Wanindu Hasaranga for 1 in the 18th over with Brar taking a superb catch at deep midwicket.

In the final two overs, RCB needed a miracle to score 68 runs to win. Harshal Patel was dismissed at the start of the 19th over for 11 by Rabada with a catch by captain Mayank Agarwal, bringing the final player Josh Hazlewood to the crease.
RCB finished at 155/9 in their 20 overs, losing the game by 54 runs.

Rabada was the pick of the bowlers for Punjab with 3/21 in four overs. Rishi Dhawan (2/36) and Rahul Chahar (2/37) bowled well too.
Earlier, blistering half-centuries by Jonny Bairstow and Liam Livingstone steered Punjab Kings to a massive 209/9 against Royal Challengers Bangalore.

Put to bat, Punjab Kings got off to a great start as their opening batters smashed 30 runs in just two overs without losing a wicket. Jonny Bairstow single-handily trashed Josh Hazlewood for 21 runs in the second over of the innings. The duo of Bairstow and Shikhar Dhawan smashed RCB’s bowlers all over the ground.

The blistering duo took their team’s total beyond the 50-run mark inside 4 overs and brought up their 50 runs partnership for the opening wicket as well. They kept thrashing the Bangalore bowlers and scored rapidly. Dhawan welcomed Glenn Maxwell’s second over of the innings with a huge six over long-on.

Bangalore finally took a sigh of relief as Maxwell bowled Dhawan for 21 runs, leaving PBKS’s score at 60/1. Dhawan’s wicket led Bhanuka Rajapaksa to the crease and he continued the attack on RCB bowlers with Bairstow. The sixth over of the innings delivered by Mohammed
Siraj saw Bairstow smashing every ball to six or four runs. The loss of Dhawan’s wicket seemed to make no impact on Punjab as Bairstow struck all around with ease and brought up his half-century.

Liam Livingstone then came to bat with the opener and kept up the momentum. Livingstone and Bairstow took their team’s total beyond the 100-run mark in only the ninth over of the innings.

RCB took a big sigh of relief when Shahbaz Ahmed dismissed hard-hitting Bairstow when he had scored 66 runs.

PBKS skipper Mayank Agarwal then joined Livingstone on the crease. Wanindu Hasaranga delivered an amazing 3-run spell and dominated the PBKS duo in his over. Mayank departed after scoring 19 runs. After Mayank’s wicket, PBKS struggled to stitch up a steady partnership as they lost Jitesh Sharma and Harpreet Brar cheaply. In the 19th over of the innings, Livingstone brought up his half-century in 34 balls.

In the 20th over, Harshal Patel struck twice as he dismissed Livingstone and Rishi Dhawan, conceding only four runs and Punjab’s innings ended at 209/9.