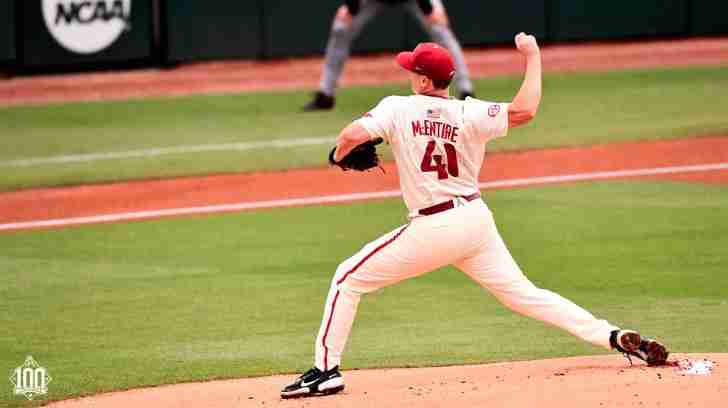 FAYETTEVILLE, Ark. – No. 4 Arkansas’ offense pummeled Arkansas State’s pitching staff for the second night in a row, bashing its way to a 10-3 win on Wednesday night at Baum-Walker Stadium to complete the midweek series sweep of its in-state foe.

The Razorbacks, now 30-7 overall on the year, have won 17 consecutive midweek games and remain undefeated in their last 13 contests against in-state opponents, a streak that dates to the 2019 season.

Dylan Leach, meanwhile, drove in a game-high three runs on a pair of hits, swatting a two-run shot – his third homer of the year – in the bottom of the second inning. The Razorbacks’ backup catcher collected his third RBI of the afternoon with a single in the fifth.

On the mound, it was Will McEntire’s turn to make a strong impression, and he did just that in his second start of the year. The right-hander fanned five over 4 2/3 innings, limiting Arkansas State to one run on three hits while walking four.

Heston Tole dominated in relief of McEntire, firing 1 1/3 perfect innings with three strikeouts to earn his first victory of the season. Issac Bracken (0.2 IP, 2 SO), Austin Ledbetter (1.0 IP) and Miller Pleimann (1.0, 2 SO) also came out of the bullpen and kept the Red Wolves off the scoreboard to help lock down the Hogs’ 10-3 win.

Arkansas now prepares for an SEC weekend series on the road at Texas A&M. First pitch between the Razorbacks and Aggies at Blue Bell Park in College Station, Texas, is set for 7:30 p.m. Friday, April 22, on SEC Network.