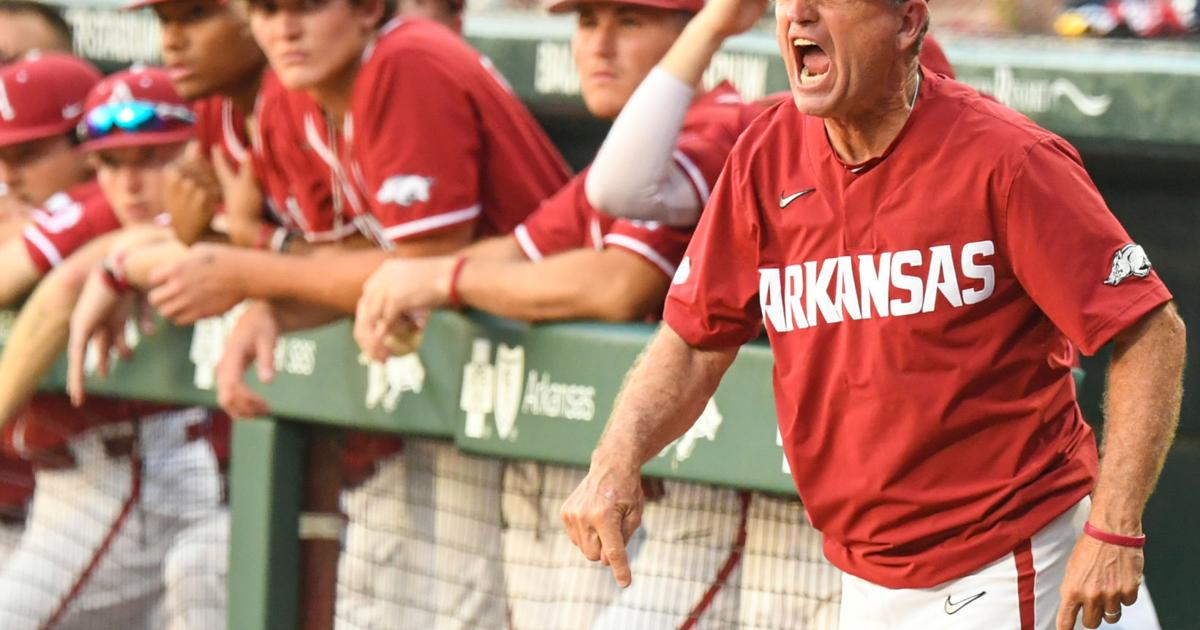 FAYETTEVILLE — No. 4 Arkansas won its longest game of the season defeating No. 24 Vanderbilt, 11-6, in a game that was completed Sunday following weather Saturday forcing the delay, but that was the end of the good news for the home team.

Vanderbilt took the series when they shutout Arkansas 5-0 on Sunday in a seven-inning game. The Razorbacks couldn’t get the bats going in the loss as they only registered two hits in the game. Carter Holton (7-3) pitched the complete game walking four and striking out five.

Dave Van Horn talked about Arkansas’ inability to get to Holton, who threw 113 pitches while praising his own starter, Jaxon Wiggins.

“I thought Wiggins threw the ball really well,” Van Horn said. “Really did a nice job for us, we didn’t do anything for him.”

Wiggins (6-2) took the loss. He worked 4.1 innings, allowing three runs, two earned, four hits, walked one and struck out eight. He threw 85 pitches in the game while facing 20 batters.

Vanderbilt center fielder Enrique Bradfield was a thorn in Arkansas’ side all three games. He had two hits in four at bats in the final game Sunday. On Friday night his three-run home run in the top of the 10th off Brady Tygart provided the 9-6 win. For the series, Bradfield had eight hits in 13 at bats producing four RBI.

“He killed us, it was pretty obvious,” Van Horn said.

Arkansas did complete Game 2 on Sunday. They were leading 8-6 on Saturday night, after trailing 5-1 early, when the game was delayed to weather prior to the bottom of the sixth inning. The two teams picked it back up on Sunday and among the key hits for Arkansas was a two-run home run by Jalen Battles in the bottom of the seventh.

“The first game, obviously, that was a real good job by our guys coming back [after] last night,” Van Horn said. “You’re always worried when you get a game delayed and you’re winning it and it seems like momentum is going your way.

“But I thought we did a great job coming out this morning and just pounding them, as far as hitting the ball hard. We scored three runs there and put that game away.”

But then the weather struck again after Arkansas’ victory. So the wait for Game 3 was on and wasn’t a short delay.

“Then we get another delay, and I’m thinking, ‘I don’t think this delay is going to help us,’” Van Horn said. “Because we had a little momentum, we were going to start playing in 40 minutes, and then we sit around for three hours.”

Of course Holton’s pitching probably had a lot to do with Arkansas’ inability to get any offense going in the final game.

“Then we just ran into Carter Holton, who was outstanding ,” Van Horn said. “We didn’t do much against him. He pitched a complete game shutout as you saw.

“We hit a couple balls hard. Probably wind knocked one or two down that might have gone out of the park, but we didn’t do much up and down the lineup, and credit to him.”

In the completed game Sunday Battles’ homer was the third of the game for Arkansas with Cayden Wallace having left the yard with a solo shot in the first and a three-run shot in the middle of a four-run fourth inning when the Razorbacks took a 6-5 edge.

Zack Morris (5-0) picked up Arkansas’ lone win on the mound during the weekend.

He came in for starter Hagen Smith, who only worked 2.2 innings and gave up five runs. Morris worked 3.0 innings, only allowing two hits, one run, a walk and struck out three.

Will McEntire worked the final three innings only allowing two hits and striking out three. With that performance, McEntire earned his first save of the season.

“I thought he did a great job, and that was our plan when we left last night,” Van Horn said of McEntire. “(Zebulon) Vermillion got the one hitter out. We weren’t bringing him back. McEntire was coming back and then it started raining or lightning or whatever the heck happened.

“That’s what we were going to do, and we got to sit on it all night and didn’t change out minds. He came out and did a great job and gave us three innings. He gave us an opportunity to rest our bullpen. If we’d had to down the stretch today.”

“Well, it was a great run,” Van Horn said. “You never want to see it end because you always want to win at home, you want to win everywhere, but we’ve won a lot of games here. I thought the crowd was awesome today, staying through that delay and then, it wasn’t a packed house, but it felt like it. That was as loud as I’ve heard them the first couple innings, especially with the number of people who were here. We really appreciate that. Home field is an advantage. It should be. Disappointed that we didn’t give them a little more to cheer for that second game.”

Arkansas will be at Alabama, Texas A&M travels to Ole Miss, Kentucky will host Auburn and LSU faces a tough test at Vanderbilt. A&M owns the tiebreaker against Arkansas while the Hogs have it over LSU and Auburn.