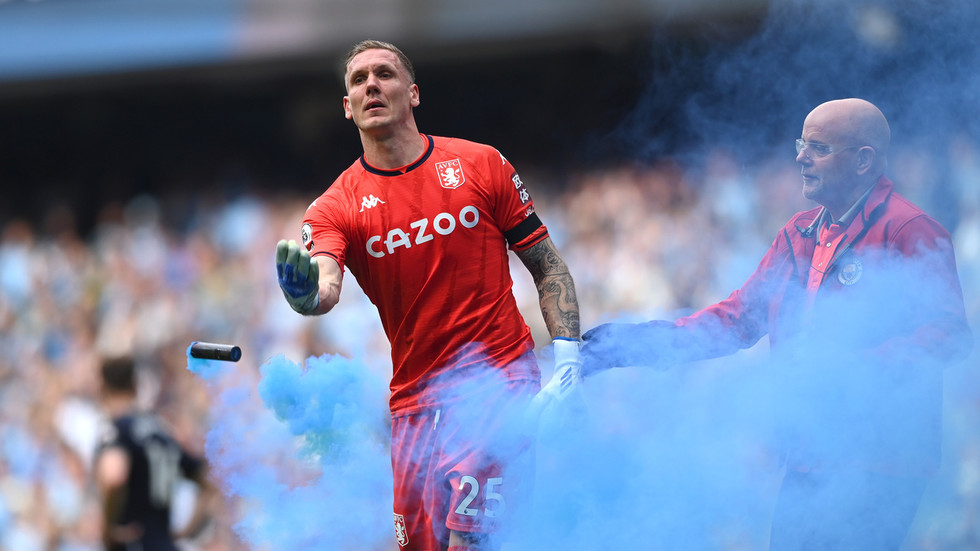 Premier League champions Manchester City have apologized to Aston Villa goalkeeper Robin Olsen after claims that the Swede was “assaulted” during a pitch invasion as fans celebrated winning the title.

City retained their Premier League crown thanks to a dramatic 3-2 comeback victory over Villa at the Etihad Stadium on Sunday, sparking wild scenes as supporters stormed the pitch at the final whistle.

Players from both teams struggled to make their way from the field, and when asked afterwards if his men had reached the dressing rooms safely, Villa manager Steven Gerrard replied: “The answer is no. My goalkeeper was attacked.

“I think those questions should go to Pep [Guardiola] and Manchester City.”

City soon issued an official statement confirming that they would investigate the claims.

“Manchester City would like to sincerely apologize to Aston Villa goalkeeper Robin Olsen, who was assaulted after the final whistle at today’s match when fans entered the pitch,” read a brief message.

“The Club has launched an immediate investigation and once identified, the individual responsible will be issued with an indefinite stadium ban.”

Footage soon emerged of Olsen attempting to make his way from the pitch at the final whistle while escorted by stewards.

The Swedish international, 32, is seen holding his face as fans thronged around him, although it appeared unclear if one apparent strike he received to the face was intentional.

Aston Villa confirmed that the player was “completely fine” but took a “bang on the back of the head,” suggesting that the matter was closed and that they would not be filing a complaint.

Olsen himself posted an angry Instagram message blasting the fans as “idiots.”

“Those idiots who attacked me will not destroy my emotions of today’s game. I got the opportunity to make my debut for this fantastic club, and we were really close to get a good result against a tough opponent,” wrote the Swede, who was standing in for regular Villa stopper Emiliano Martinez.

Also amid the chaotic scenes, overzealous Man City fans were seen clambering onto the crossbar of one of the goals at the Etihad before the structure completely collapsed.

English football has seen a series of controversial pitch invasions across the country as the season draws to a close.

On Tuesday night, Everton fans celebrated their Premier League survival by storming onto the pitch at their Goodison Park home, with one fan becoming involved in an altercation with Crystal Place manager Patrick Vieira after taunting him.


In even uglier scenes, a Nottingham Forest fan was jailed for six months after headbutting Sheffield United captain Billy Sharp in the aftermath of their Championship playoff semifinal second leg.

Lower down the English football ladder, Swindon Town players were reportedly assaulted by Port Vale fans at the end of their League Two playoff clash.

Speaking on the latest incident, Manchester City manager Guardiola said: “I’m so sorry on behalf of the club. The emotions, it’s difficult to understand why the people respond in this way.

“Hopefully we can discover who it was and he’ll be punished. I don’t know how to stop it, you cannot put 1,000 guards [around the pitch].”


City retained their Premier League title in dramatic circumstances on Sunday, having found themselves 2-0 down to Villa until the 76th minute at the Etihad.

A defeat would have sent the title Liverpool’s way as the Reds fought back to beat Wolverhampton Wanderers 3-1 in their game simultaneously taking place at Anfield.

But City dug deep to turn the title race around in a remarkable six-minute spell in which they struck three times – twice through substitute Ilkay Gundogan and once through Rodri.

The title is Catalan boss Guardiola’s fourth since joining City in 2016, and is the big-spending club’s sixth Premier League crown in total.

Liverpool, who finished a solitary point behind their rivals in the standings, have the consolation of a Champions League final against Real Madrid to look forward to in Paris on Saturday.