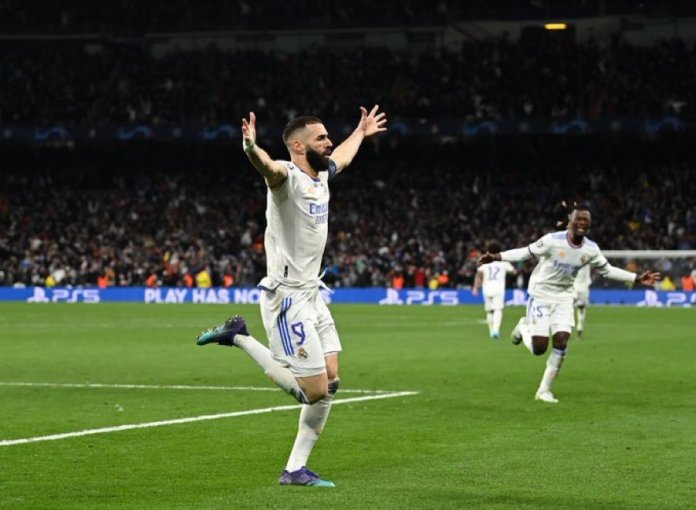 Champions League Semi-Final LIVE: Real Madrid vs Manchester City 2nd Leg LIVE Streaming: City will look to reach their second straight Champions League final when they take on newly-crowned LaLiga champions Real in the Spanish capital and hope to make up for last year’s loss to Chelsea in the showdown in Porto. Follow InsideSport.IN for the latest sports news and updates

Firs Half of Extra Time ends

Benzema again has led the line extremely well and is now replaced by Ceballos.

GOALLLLLLLLLLLLLLLLLLLLLLLLLLLLLLLL!!!!! BENZEMA PUTS MADRID AHEAD IN THE TIE!!!!!!!!! 3-1 ON THE NIGHT, 6-5 ON AGGREGATE! Once again in the Champions League Benzema holds his nerve. The Frenchman dispatches his effort low and hard into the bottom-right corner to send the Bernabeu into raptures. What a comeback from the home side.

GOALLLLLLLLLLLLLLLLLLLLLLLLLLLLL!!! RODRYGO LEVELS THE TIE!!!!!!!!! 2-1 ON THE NIGHT!!!! Out of nowhere Madrid are back in the game as Rodrygo dispatches a perfect header past Ederson. Asensio delivers a precise cross from the right flank, allowing the Brazilian to rise between Laporte and Dias to place his effort into the top-left corner. What a turnaround at the Bernabeu.

GOALLLLLLLLLLLLLLLLLLLLLL!!!!!!!! RODRYGO GETS A GOAL BACK!!!!!! 1-1!!!!! Madrid have a glimmer of hope as Rodrygo converts at the near post. Benzema steers a cross from Camavinga towards the middle and Rodrygo reacts ahead of Ederson to fire home.

Mahrez has made the decisive impact tonight to put City on the brink of the Champions League with a brilliant strike. He is replaced by Fernandinho to shore up the City midfield.

Madrid appear shellshocked by the Mahrez goal. All the energy has dropped out of their play.

GOALLLLLLLLLLLLLLLLLLLLLLLLL!!! MAHREZ FINDS THE NET WITH A ROCKET!!!!! 1-0 CITY!!!!!!! The visitors take the lead on the night and a two-goal advantage in the tie courtesy of a super effort from Mahrez. Silva leads a break forward for City to the edge of the box before offloading to Mahrez in the inside-right channel. The winger connects first-time on his left foot, beating Courtois for pace and precision into the top-right corner.

Vinicius gets the better of Walker down the left flank, but his final ball lets him down as Laporte clears his cross to the back post with ease.

Madrid are playing with a better intensity in the second half, but there has been a complete lack of composure in the final third. Benzema cannot do it all for the hosts.

VINICIUS AGAIN! The Brazilian fluffs his lines once more. Casemiro threads him through on goal where he will have only Ederson to beat. However, he takes a poor first touch and allows Laporte to clear the danger.

Vinicius takes the possession following an offload from Benzema, but he cannot sort out his feet in time and loses out to Dias before he can strike at goal.

SCRAMBLE! Vinicius probes down the left flank and cuts a low ball back for Modric to strike. Dias blocks his attempt and Ederson makes a charge to come for the ball. He fails to gather and then Walker tries to fend off Vinicius to guide it towards his keeper. Rodri has to take charge of the situation to clear the danger for the visitors.

SAVE! Jesus is played down the inside-left channel and turns to fire at goal on his left foot. Courtois is alert to the danger and makes the save at his near post.

VINICIUS HAS TO SCORE! The Brazilian fires wide from six yards with the goal gaping. Carvajal whips a dangerous cross to the back post after Madrid break from the kick-off. Vinicius latches on to the cross and only has to beat Ederson with his left foot, but he misses the target. A huge opportunity spurned.

OFFSIDE! Mendy slots a throughball behind the City defence for Benzema to collect in the inside-left channel. He only has Ederson to beat, but curls his effort wide of the target. Benzema may be relieved to see the offside flag raised.

Walker matches Vinicius stride-for-stride down the left flank and he makes a fine challenge to knock the ball out for a corner.

SAVE! Foden latches on to a knockdown in the final third from Jesus and launches a strike on his right foot at goal, but Courtois gets down to make a sharp stop pushing it away from the net.

Casemiro goes down after trying to unsuccessfully haul Foden off the ball. He requires treatment, but is okay to continue. De Bruyne questions why the Brazilian was not booked for his challenge.

Modric collects down the right flank and lifts a cross towards Benzema in the middle, but Laporte stretches to knock the cross away from the forward.

Walker wins a free-kick for City from the resulting corner after being caught by Militao in the air.

WIDE! Kroos tries to angle his effort over the City wall, but it skims the head of Mahrez and travels inches wide of the left post. Madrid have a corner.

Vinicius goes down on the edge of the box as Rodri catches him on the boot. Madrid win a free-kick in a dangerous position.

CLOSE! City probe on the edge of the box and De Bruyne offloads back to Jesus to strike. He curls an attempt towards goal, but it does not have enough bend to hit the target, remaining wide of the right post.

SAVE! De Bruyne releases Silva with a chip into the box and the Portuguese fires at goal on the half-volley. His effort seems destined for the top-right corner, but Courtois reacts to turn it behind with a fine reaction stop.

CHANCE! Valverde knocks a long ball from Kroos down into the path of Benzema in the box. Dias does well to steer it away from the forward, but only into the path of Vinicius. The Brazilian goes for a first-time strike on his left foot that he lifts over the bar. That was a chance for the hosts.

SAVE! De Bruyne cuts in from the right flank and has space to strike on his left foot. He connects well with his attempt, but it sails straight into the hands of Courtois.

There is no surprise that City are trying to take the pace out of the game with their passing rhythm. The home fans noise their displeasure.

OVER! Madrid work an opening down the right flank as Carvajal feeds Valverde, who offloads towards Benzema. The forward fires at goal first-time, but lifts his attempt over the bar.

SAVE! Mahrez goes for goal from distance on his left foot, but he angles his strike straight into the hands of Courtois.

OVER! City’s corner comes to nothing and Madrid answer by pushing back upfield. Carvajal collects in space on the right flank and angles a cross into the box. Benzema rises highest, but he glances his header over the bar. An early sighter for the Frenchman.

Cancelo has a probe down the left flank and wins a corner off the legs of Militao. City have the chance to put the home side under pressure from the set-piece.

Kroos whips a free-kick towards the near post, but Foden rises to clear the danger for the visitors.

1′ Manchester City have won their last three Champions League matches against Real Madrid; only two sides have ever won four in a row against them in European competition, with Ajax doing so between 1973 and 1995 and Bayern Munich between 2000 and 2002.

0′ Man City get the ball rolling

Even 100million Jack Grealish is taken back by the Bernabeu 😍 #UCL pic.twitter.com/6AUVffam9O

Will we see this man making an impact tonight?@JackGrealish 👊🏽#UCL pic.twitter.com/7mAAtPE3Ck

Real Madrid boss Ancelotti took a risk rushing David Alaba back for the first leg following his injury woes, and the Austrian was taken off at half time at the Etihad and subsequently missed the title-clinching win over Espanyol alongside Eden Hazard, Gareth Bale and Luka Jovic – the latter of whom is now back.

Alaba has made the squad for the second leg but may only make the bench having not trained yet, while Eder Militao and Nacho Fernandez will also return from domestic suspensions to form a strong Blancos rearguard. Isco has also missed out on a place in the squad due to illness.

The likes of Benzema, Vinicius, Toni Kroos and Ferland Mendy were all benched at the weekend with this encounter in mind, and Rodrygo will hope to keep his place in the final third after starting in the first leg and bagging a brace against Espanyol.

Guardiola will welcome Joao Cancelo back with open arms following his first-leg suspension, and Kyle Walker is in contention to start despite his ankle injury.

Nathan Ake trudged off with a knock in the win over Leeds and will need to be assessed, and John Stones is also absent, so it could be another restless evening for Oleksandr Zinchenko on the left of the City defence.

De Bruyne, Silva and Riyad Mahrez are all primed to return to the first XI after being named among the substitutes at Elland Road, while Real’s nemesis Gabriel Jesus prepares to spearhead the charge amid his hot streak of goalscoring form.

Real Madrid vs Manchester City 2nd Leg LIVE: When and where to watch the live streaming of Champions League matches?

When will Real Madrid vs Manchester City kick off in the Premier League? – Date
RMA vs MCI match will be played on 5th May 2022

What time will Real Madrid vs Man City kick off? Time
RMA vs MCI will begin at 12:30 AM IST

Where will Real Madrid vs Manchester City be played? – Venue
The game will kick-off at Santiago Bernabeu (Real Madrid)

UEFA Champions League LIVE: When and where to watch the live streaming?

Champions League: Who will be the Match official at the Etihad? Referee
Daniele Orsato will be in charge of Real Madrid vs Manchester City

The broadcasting rights for the UCL 2021-22 will be available with the Sony Pictures Network. You can the watch UCL 2021-22 Live Telecast In India on Sony Ten 2 HD and Sony Six. The channel is available for telecasting on all the service providers in India. You can connect with the DTH providers and get the channel started.