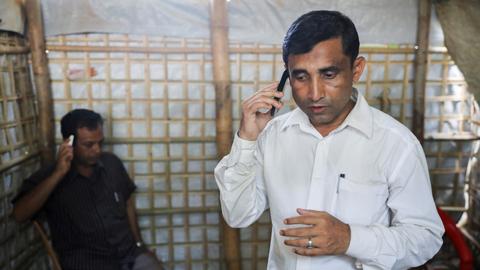 The family Mohib Ullah, a community leader from the Arakan Rohingya Society for Peace and Human Rights, has blamed hardliners for murdering him for his popularity and rights work.

Ullah, who was in his late 40s, led one of the largest of several community groups to emerge since more than 730,000 Rohingya Muslims fled violence in Myanmar after a military crackdown in August 2017. Most have been stuck in camps in Bangladesh since.

Invited to the White House and to represent the Rohingya community at the United Nations Human Rights Council, he emerged in recent years as one of the most high-profile advocates for the persecuted minority.

Unidentified assailants gunned him down late Wednesday, prompting Bangladeshi authorities to deploy hundreds of extra armed police in the camps on Thursday.

Speaking out against violence in the camps

Habib Ullah, the victim’s brother, told the AFP news agency that Mohib had received death threats from the Arakan Rohingya Salvation Army in recent months and at least eight men from the group took part in the attack.

“ARSA forces have committed this murder. They often threatened to kill my brother from different (phone) numbers,” he said.

“ARSA did not just kill our brother, they killed our great leader.”

Police have said at least four unidentified assailants were involved in the shooting, which happened as Mohib Ullah chatted with other community leaders outside his office.

Mohib Ullah had set up the Arakan Rohingya Society for Peace and Human Rights (ARSPH), a community-based rights group that documented atrocities allegedly committed against the group by the Myanmar military during a 2017 offensive.

The former schoolteacher rose to prominence after his group held a grand rally on the second anniversary of the crackdown in 2019, which an estimated 200,000 Rohingya attended.

“Mohib Ullah was a leading representative of the Rohingya community, who spoke out against violence in the camps and in support of the human rights and protection of refugees. His killing sends a chilling effect across the entire community,” said Saad Hammadi, Amnesty International’s South Asia Campaigner, in response to the killing.

At least two thousand Rohingya refugees have been forced to flee their shelters to other camps since violence broke out last year between two rival factions vying for control of the drug trade in the camps.

“Violence in the refugee camps in Cox’s Bazaar has been a growing problem. Armed groups operating drug cartels have killed people and held hostages. The authorities must take immediate action to prevent further bloodshed,”  Hammadi said.

No arrests so far

A senior member of Mohib Ullah’s group also blamed ARSA, saying the group was enraged by his growing popularity in the refugee camps and his work, which gave the “Rohingya a non-violent, progressive and liberal voice of reason.”

Rights activist Nur Khan Liton said Mohib Ullah told him earlier this month that he had received death threats from ARSA after his rights group expanded to all the Rohingya refugee camps.

Police spokesman Rafiqul Islam said the probe was still at a preliminary stage, and told reporters no arrests have been made so far.