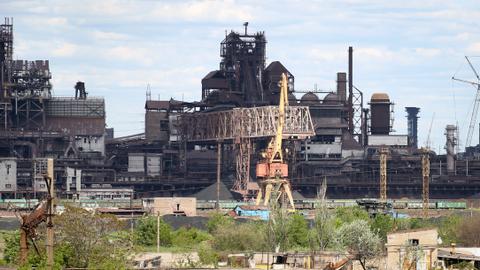 Russian forces capture almost the entire strategic Mariupol city as Ukraine moves to abandon the last bastion, making it the biggest city to be taken by Moscow in fighting, now in its 84th day.

Russia has moved to expel a total of 85 European embassy staff, responding to similar moves by those countries. The Foreign Ministry said it was ordering out 34 diplomatic staff from France, 27 from Spain and 24 from Italy.

The three countries are among European nations that have collectively thrown out more than 300 Russians since Moscow’s February 24 incursion of Ukraine. In many cases, they accused Russian diplomats of spying, which Moscow has denied.

The first Russian soldier on trial in Ukraine for “war crimes” has pleaded guilty, facing possible life imprisonment in Kiev. He is accused of killing a 62-year-old civilian in northeast Ukraine in the first days of the Kremlin’s offensive.

Asked in court if he was guilty of the allegations, including “war crimes” and premeditated murder, 21-year-old sergeant Vadim Shishimarin responded “yes”. As a prosecutor read out charges against him in Ukrainian, an interpreter translated for him into Russian.

Prosecutors say Shishimarin — from the Siberian region of Irkutsk — was commanding a unit in a tank division when his convoy came under attack. He and four others stole a car and encountered a 62-year-old man. According to prosecutors, Shishimarin was ordered to kill the civilian and used a Kalashnikov assault rifle to do so.

EU proposes up to 9B euros in more aid to Ukraine

EU chief Ursula von der Leyen has proposed extra aid to Ukraine of up to nine billion euros ($9.5 billion) this year to help Kiev cope with the ravages of Russia’s offensive.

The money would be raised by the EU on the markets and offered to Ukraine in the form of loans, an official in von der Leyen’s European Commission told AFP news agency.

In a broadcast statement, von der Leyen also said it was time to think about rebuilding Ukraine whenever the conflict ends, adding the EU has “a strategic interest in leading this reconstruction effort”. Other countries and international institutions should also be part of the reconstruction project, she said.

EU rushes out $300B roadmap to ditch Russian energy

The European Union’s executive arm has moved to jump-start plans for the bloc to abandon Russian energy amid the Kremlin’s Ukraine offensive, proposing a nearly 300 billion-euro ($315 billion) package that includes more efficient use of fuels and faster rollout of renewable power.

The European Commission’s investment initiative is meant to help the 27 EU countries start weaning themselves off Russian fossil fuels this year. The goal is to deprive Russia, the EU’s main supplier of oil, natural gas and coal, of tens of billions in revenue and strengthen EU climate policies.

The US, several global development banks and other groups have unveiled a multi-billion dollar plan meant to address a worldwide food security crisis exacerbated by Russia’s offensive against Ukraine.

Vandals have daubed blue and yellow paint — Ukraine’s national colours — on a Russian monument to soldiers who perished fighting Napoleon’s forces in Switzerland in the 18th century.

“Hundreds of Russian men died fighting the French in the Swiss Alps. They have nothing to do with 21 century events, and their memory must not be desecrated,” the Russian mission in Geneva tweeted.

Erected by Russia in 1899, it is dedicated to Russian General Alexander Suvorov and his fallen soldiers who fought the French in the Schoellenen Gorge in September 1799. Uri police said they were investigating the case and a separate incident in which the town hall in Altdorf was defaced.

Germany got over 200 asylum applications from Russians in April

Germany has registered a slight increase in the number of Russian nationals applying for asylum since the beginning of the conflict in Ukraine, an interior ministry spokesperson has said.

In April, the second full month of the offensive, 222 people from Russia applied for asylum in Germany, the spokesperson said in Berlin.

Moscow says it is expelling 34 “employees of French diplomatic missions” in a retaliatory move following the expulsion of Russian diplomats from France as part of joint European action over Russia’s military campaign in Ukraine.

“Thirty-four employees of French diplomatic missions in Russia have been declared persona non grata,” Russia’s foreign ministry said in a statement, adding that they have two weeks to leave the country. France “strongly” condemned the move soon after.

France in April kicked out 35 Russians with diplomatic status as part of a broader wave of expulsions that saw more than 300 Russians sent home from European capitals.

At least 28,300 Russian soldiers have so far been killed during the conflict in Ukraine, the Ukrainian Defence Ministry announces.

Some 400 Russian troops have been killed over the past 24 hours, the ministry said in a statement.

As Vladimir Putin’s soldiers retreat from Kharkiv, they leave behind rubble and ruin.

In the past day, small groups from newly liberated areas have returned to what’s left of their homes and spoke to TRT World pic.twitter.com/Wr4dYkPUfx

Japan’s foreign minister has urged Beijing to “play a responsible role” over Russia’s offensive in Ukraine in his first talks with his Chinese counterpart in six months.

Foreign Minister Yoshimasa Hayashi told his Chinese counterpart Wang Yi that Russia’s offensive “is a clear violation of the UN Charter and other international laws,” Japan’s foreign ministry said in a statement.

He “urged China to play a responsible role in maintaining international peace and security,” it added.

At least 229 children killed so far in Russian attacks: Ukraine

At least 229 children have been killed and 424 others injured so far in the war with Russia, Ukraine’s Prosecutor General Office says.

Children in the eastern Donetsk, north-central Kiev, and northeastern Kharkiv regions have been the most affected in Ukraine, the office said in a statement.

Russia’s daily bombings and shelling have damaged 1,772 educational institutions, with 161 of them completely destroyed. Some 12,118 “crimes of aggression and war crimes,” as well as 5,750 “crimes against national security” have been recorded since the start of the war, read the statement.

The Kremlin accuses Kiev authorities of not wanting to continue talks to end hostilities that started after Russian President Vladimir Putin sent troops into pro-Western Ukraine.

“Talks are indeed not moving forward and we note the complete lack of will of Ukrainian negotiators to continue this process,” Kremlin spokesman Dmitry Peskov told reporters.

Kremlin has ‘no information’ about Russian soldier on trial in Ukraine

The Kremlin says it has no information about a Russian soldier accused of killing an unarmed civilian in Ukraine, the first war crimes trial since Moscow sent troops into its pro-Western neighbour.

“We still have no information. And the ability to provide assistance due to the lack of our diplomatic mission there is also very limited,” Kremlin spokesman Dmitry Peskov told reporters.

The United States has mobilised about three times as much support for Ukraine as the European Union, according to figures compiled by a German think tank.

The Kiel Institute for the World Economy said that a new aid package passed by the US House of Representatives takes American military, financial and humanitarian support for Ukraine to over $45 billion ( almost 43 billion euros) between January 24 and May 10.

The institute found that aid from the EU amounted to just $16.8 billion (under 16 billion euros) during the same period. However, some countries in the 27-nation bloc have shied away from giving the value of their Ukraine aid, particularly for arms supplies. Compared to their gross domestic products, Estonia, Latvia and Poland provided the most support, ahead of the United States, according to the think tank’s calculations.

A US proposal to levy tariffs on Russian oil means buyers will have to pay more or seek alternative suppliers, Kremlin spokesman Dmitry Peskov says.

US Treasury Secretary Janet Yellen said on Tuesday the European Union could combine import tariffs on Russian oil with the phased oil embargo it is trying to put in place to shrink Russia’s energy revenues.

The tariff concept will be presented at a G7 finance leaders meeting this week as an economically less costly way to siphon away oil revenues from Moscow while producing faster results, US Treasury officials told reporters.

Russia’s defence ministry says that 959 Ukrainian soldiers have surrendered this week at the besieged Azovstal steel plant in Ukraine’s port city of Mariupol.

“Over the past 24 hours, 694 militants surrendered, including 29 wounded,” the ministry said in its daily briefing on the conflict.

Defense Minister Benny Gantz said last month he would authorise the delivery of helmets and vests, signaling a shift in Israel’s position on providing such equipment.

It follows a request by Ukraine for the supplies.

What does the process involve? pic.twitter.com/23lcjAQr0H

Russian forces have occupied the city since early in the offensive.

According to the regional administration, the Russian occupiers are trying to conceal the situation but Russian troops were more actively checking private cars in the city, most likely looking for the guerrillas.

No details of the killings were given and the report could not immediately be confirmed. Throughout the conflict, the Ukrainians have claimed to have killed many Russian generals and other officers. A few of the deaths have been confirmed by the Russians.