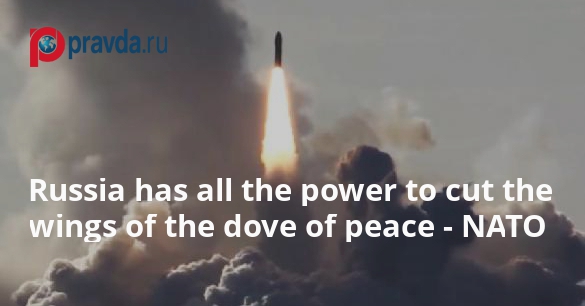 How many angels are there on the tip of the needle? This question is just as pointless as an attempt to find an answer to the question of how many NATO missiles there are in Europe. The North Atlantic Alliance is known for its arrogance. This could be the reason behind the announcement from US President’s Special Representative for Nuclear Nonproliferation Jeffrey Eberhardt, who shamelessly called on Russia on October 14 to abide by the terms of the Intermediate-Range Nuclear Forces Treaty (INF Treaty).

The Treaty on Intermediate-Range and Shorter-Range Missiles was signed in 1987. It came into force in 1988 and made it mandatory to destroy all ground-based ballistic missiles, the flight performance of which was ranging from 500 to 1000 km and from 1000 to 5500 km. According to the treaty, the USSR destroyed 117 ground-based launchers in the countries of the Warsaw Pact, as well as in the European part of its territory. The United States dismantled only 32 launchers. The USA put forward an initiative to suspend the treaty in 2019.


How it all started

Back in 2014, Russia’s “partners” overseas began to present numerous claims to Moscow. In particular, the US accused Russia of developing the Novator 9M729 missile, which, according to many military specialists, did not fall under the INF Treaty. Such behaviour was perceived as an attempt to get rid of the context that was holding down a new round of the arms race. The original goal had been achieved long in advance: NATO managed to deceive the vigilance of the Soviet Union and expand the zone of its unconditional domination. NATO no longer wanted to pretend to be the dove of peace.

In fact, the USSR, and later Russia, had always respected the strategic agreements, even if they contradicted to national interests. It is worth recalling that 33 years ago Russia destroyed not only such missiles as the Pioneer, Relief and Temp-S, but even the Oka that had not fallen under the range of the treaty. Its combat range did not exceed 400 km.


However, in 2017, at a regular meeting of representatives of signatory parties, the military unanimously agreed that the existing treaty had to be strengthened and even expanded. At the same time, then US Secretary of State Mike Pompeo disavowed the treaty literally a year later — in 2018.


Do the Americans really want to put the Tomahawk ground modifications — the Gryphon missile — on alert again? Do they want to bring the Pershing back from oblivion? Russia is ready for such a possible development. Two years ago, Russian Defence Minister Sergei Shoygu confirmed that Russia was capable to respond to any American initiative. In particular, Shoygu announced the creation of a ground-based version of the Caliber sea-based hypersonic complex.


The Caliber complex is armed with advanced cruise missiles. It comes in four configurations and can be installed both on surface warships and on submarines, even on airplanes. The fourth type of the system is the mobile land complex Caliber-M. This is a universal weapon capable of striking targets both at a distance of up to 300 km and up to 1500 km. The complex was developed about 20 years ago. Its first successful tests on underwater carriers took place back in 2004. According to official reports, the Zircon hypersonic missile can be launched from the system as well.


In addition to the formidable Caliber, Russia may also revive the solid-fuel Pioneer missile, suitable for destroying targets at distances of up to 5,000 km. There are military analysts who do not exclude the appearance of a new type of launchers based on the Kinzhal hypersonic missile system.

It all started from US target missiles, which NATO missile defence systems used for defence practices. It was back in 2013 when the Russian military, on numerous occasions, pointed out to Western counterparts that Hera and Anchor target missiles had the performance features of typical intermediate and shorter-range missiles. It was clear to all that under the guise of military manoeuvres, NATO was practicing missile attacks on the Russian borders. The Israeli army was also part of the game, by the way.

Interestingly, it was reported in October of this year, that Estonia acquired Israeli Blue Spear anti-ship missiles, which can be quickly and easily converted into a ground-based weapon that may pose a formidable threat to a number of Russian regions, the Kaliningrad enclave in the first place.

Thus, it just so happens that NATO, quite in the spirit of Mark Milley, the 20th chairman of the US Joint Chiefs of Staff, is working on a massive offensive against Russia that would be conducted with the use of various types of weapons.

It was no coincidence that Acting Deputy Director of the Department for Nonproliferation and Arms Control of the Russian Foreign Ministry, Konstantin Vorontsov, called on the United States and its allies in early October to introduce a moratorium on the deployment of the medium and shorter-range missiles in Europe.

Why do the Americans need new/old types of missiles? After all, they will not change both the overall balance of strategic types of weapons and the mutually assured destruction (MAD coefficient).

Most likely, such a burning desire to get rid of the shackles of the INF Treaty is associated with the quiet paranoia, which has been tormenting defence-inquiring minds in the US for several years now.


As Vladimir Putin has recently noted, Russia has for the first time become the absolute leader in the field of innovative technologies, while the United States has been left behind to catch up again.


At one time it took the USSR only four years to build its own atomic bomb to thus restore parity with the United States in 1949. These days, however, the United States has not been able to perform a test launch of a guided hypersonic missile for several years now. The world is waking up to see that the king is naked.