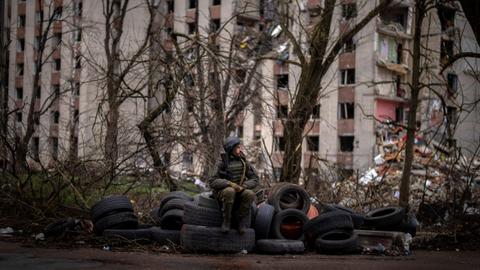 Russia pounds targets in eastern Ukraine, unleashing rockets on a steel plant that is Ukraine’s last redoubt in the port city of Mariupol as fighting continues on 70th day.

Russia’s defence ministry has said that it has disabled six railway stations in Ukraine used to supply Ukrainian forces with Western-made weapons in the country’s east.

The ministry said it disabled the railway stations by bombing their power supplies using high-precision air and sea-based weapons. It did not say which Western-made weapons were supplied to Ukrainian forces via those stations.

European Commission president Ursula von der Leyen has said the EU will impose a gradual Russian oil ban in retaliation for the conflict in Ukraine.

“We will make sure that we phase out Russian oil in an orderly fashion,” von der Leyen said in speech to the European Parliament in Strasbourg as she presented a sixth package of sanctions against Moscow to deny funding to the war effort against Ukraine.

Ukrainian authorities say that scores of civilians have been killed and wounded in the latest attacks in the country’s east.

Donetsk regional Governor Pavlo Kyrylenko said that 21 civilians were killed and another 27 were wounded in Russian attacks on Tuesday.

He said in a statement on a messaging app that it marked the highest number of civilian victims in the region since April 8 when a Russian missile attack on a railway station in the city of Kramatorsk killed at least 59 people.

In the neighbouring Luhansk region, Gov. Serhiy Haidai said at least two civilians were killed in Russian shelling during the last 24 hours and two others were wounded.

A convoy of buses has left Mariupol in a new attempt by Ukraine, the UN and the International Committee of the Red Cross to evacuate civilians from the southern Ukrainian city, the regional governor has said.

The buses were heading for the Ukrainian-controlled city of Zaporizhzhia, Donetsk Governor Pavlo Kyrylenko said.

He did not make clear whether any more civilians had been evacuated from a vast steel works in Mariupol where the city’s last defenders are holding out against Russian forces.

Kiev does not rule out the possibility that Moscow could at some point use the armed forces of Russian ally Belarus in the offensive in Ukraine, a spokesperson for the Ukrainian State Border Service has said.

Speaking after the Belarusian armed forces began large-scale drills, spokesperson Andriy Demchenko said: “We do not rule out that the Russian Federation could at some point use the territory of Belarus, the Armed Forces of the Republic of Belarus, against Ukraine. Therefore, we are ready.”

The British military believes Russia will make a push to try to seize the cities of Kramatorsk and Severodonetsk in eastern Ukraine.

The British made the comment in a daily briefing it posts on Twitter about the war. The Defence Ministry said Russia had some 22 battalion tactical groups near Izium in its attempt to advance in the area. Russia uses so-called battalion tactical groups, units of infantry typically reinforced with tanks, air defences and artillery, in its operations. Each group typically has around 800 troops.

The British said: “Despite struggling to break through Ukrainian defences and build momentum, Russia highly likely intends to proceed beyond Izium to capture the cities of Kramatorsk and Severodonetsk.” It added: “Capturing these locations would consolidate Russian military control of the northeastern Donbass and provide a staging point for their efforts to cut off Ukrainian forces in the region.”

The armed forces of Belarus have begun sudden large-scale drills to test their combat readiness, the defence ministry of Ukraine’s neighbour has said.

“It is planned that the (combat readiness) test will involve the movement of significant numbers of military vehicles, which can slow down traffic on public roads,” the Belarusian ministry said in a statement.

Against the backdrop of the Russian offensive in Ukraine, the ministry said the exercise posed no threat to its neighbours or the European community in general.

Ukrainians wait in Mexico City for US entry

Hundreds of Ukrainian refugees have been camping out in Mexico City and waiting for the US government to allow them into the country.

About 500 evacuees were waiting in large tents under a searing sun on a dusty field on the east side of Mexico’s sprawling capital. The camp has been open only a week and from 50 to 100 people are arriving every day.

Some refugees have already been to the US border in Tijuana where they were told they would no longer be admitted. Others arrived at airports in Mexico City or Cancun. The US government announced in late March that it would accept up to 100,000 Ukrainian refugees.

US Secretary of State Antony Blinken has said the conflict in Ukraine has worsened problems in the Western Hemisphere caused by the coronavirus pandemic, such as rising poverty.

Blinken told the annual Conference of the Americas Luncheon on Tuesday that the effects of the fighting are being felt after the pandemic inflicted “massive economic harm throughout the region.”

Giving the luncheon’s keynote address in Washington, Blinken said: “Now, with the Russian government’s brutal war of aggression on Ukraine, many of these preexisting problems, these preexisting conditions, have been made worse, raising the price of essential commodities throughout the Americas, from fertiliser to wheat to petroleum, cutting off key export markets for many industries in the Americas, and forcing households across the region to make very wrenching choices as the cost of living skyrockets.”