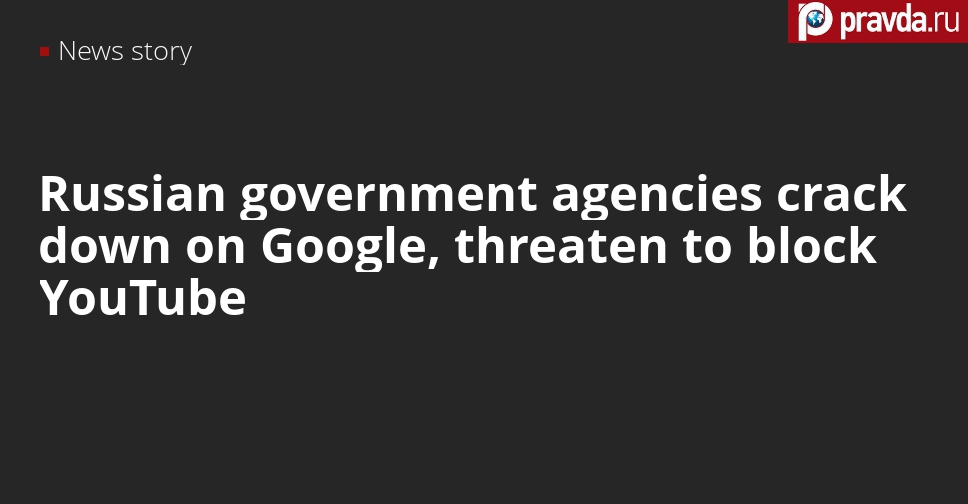 The Foreign Ministry of the Russian Federation will appeal to Russian departments with a proposal to take reciprocal measures against both YouTube video hosting service and German media in Russia after YouTube blocked RT’s German-language projects.


“Due to fact that the decision fully fits into the logic of the media war unleashed against the Russian Federation, taking reciprocal symmetrical actions in relation to German mass media in Russia that have their history of interference in Russia’s internal affairs deems not only appropriate, but also necessary. Taking into account the repeated calls, which the German side ignored, to return to the fulfillment of its international obligations in the field of protecting the rights of mass media and freedom of speech, we consider such measures to be the only possible way to stimulate the interest of the partners in a constructive and meaningful dialogue around this unacceptable situation. Based on RT’s appeal for protection against discrimination, it was decided to appeal to competent departments of the Russian Federation with a proposal to develop and adopt retaliatory measures against YouTube hosting and German media,” the Foreign Ministry said in a statement.


The Russian diplomatic service called the deletion of RT’s German-language projects an act of unprecedented information aggression that YouTube committed against the background of obvious connivance, if not insistence from the German side.


“Aggression against the programs of the Russian media holding is obvious — to shut down sources of information that do not fit into a comfortable media background for the German officialdom,” the statement also said.


The attempts of the Internet giant to link such flagrant actions to some abstract violations of internal rules of the community to justify such an obvious manifestation of censorship and suppression of freedom of expression can not and will not be considered, the statement continues.

The Foreign Ministry stressed that the date to delete the channels was apparently chosen with special cynicism, given that September 28 is celebrated as the International Day of Universal Access to Information, the ministry concluded.

Russian’s consumer rights protection watchdog Roskomnadzor contacted Google demanding all restrictions from RT DE and DFP channels be removed and reasons for their introduction be explained. In the event Google decides not to unblock the channels, the Internet giant will face a fine of up to three million rubles. It is not ruled out that the agency may consider blocking YouTube in Russia as well.

German government not behind YouTube’s decision

The German government has nothing to do with the deletion of German-language YouTube channels RT DE and Der Fehlende Part (DFP), owned by RT, Steffen Seibert, a representative of the Cabinet of Ministers of the Federal Republic of Germany said. According to him, it was YouTube that made the decision. Google, which owns YouTube, attributes the deletion of the channels to a violation of the terms of use.


“This measure is a YouTube decision … This is not a measure taken by the federal government … We have taken this decision into consideration, I have nothing more to say,” said Mr. Seibert, adding that he learned about the blocking from news.