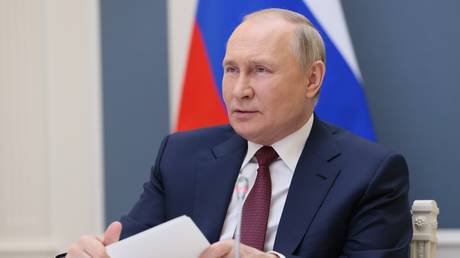 Moscow is ready to export grain and fertilizer if the West lifts its politically motivated sanctions, President Putin says

Food shortages across the globe are not Moscow’s fault but Russia is ready to help alleviate them by exporting grain and fertilizers – if the West removes its “politically motivated” embargo, President Vladimir Putin told Italian Prime Minister Mario Draghi during a phone call on Thursday.

Putin pointed out it was “groundless” to accuse Russia of problems with agricultural products reaching global markets, according to the Kremlin’s readout of the call. The Russian president attributed the situation to “disruptions in production and supply chains, as well as the financial policies of Western countries during the coronavirus pandemic,” which were only “aggravated by the anti-Russian restrictions” imposed by the US and the EU over the conflict in Ukraine.

Russia is ready to make a “significant contribution to overcoming the food crisis” by exporting both fertilizer and grain if the Western embargo is lifted, Putin said.

While discussing the situation in Ukraine, Putin informed Draghi that Russia has reopened the Azov Sea for maritime traffic and maintains a safe lane in the Black Sea for civilian shipping, which he said was being hindered by the government in Kiev.

The call, which came at Draghi’s request, follows reports in the Italian media that his government had proposed a peace plan for Ukraine. According to the daily La Repubblica, Italian Foreign Minister Luigi Di Maio sent a proposal for ending the hostilities to the UN last week. Neither the Kremlin nor the Russian Foreign Ministry have received any such proposal from Rome so far, according to their spokespersons.

The call also touched on Russian gas exports – as Putin reassured Draghi that Moscow will continue “uninterrupted supplies of natural gas to Italy,” at prices fixed by the existing contracts.

Rome had previously rejected paying for gas in rubles and Draghi himself campaigned for buying energy elsewhere, only to come around last week.