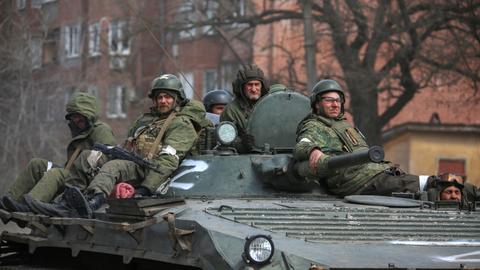 Russian President Putin claims victory in the battle for Mariupol despite an estimated 2,000 Ukrainian fighters still holed up at a giant steel mill, as fighting continues on the 58th day of the conflict.

Ukrainian President Volodymyr Zelensky has accused Russia of planning to “falsify” an independence referendum in the partly occupied southern regions of Kherson and Zaporizhzhia.

In a video message, Zelenskyy urged residents of areas under occupation to not provide any personal information, like their passport numbers, to the Russian forces.

“This is not to help you… This is aimed to falsify the so-called referendum on your land if an order comes from Moscow to stage such a show,” the Ukrainian leader said. “This is the reality. Be careful.”

Around 120,000 civilians are blocked from leaving the besieged city of Mariupol, Ukrainian President Volodymyr Zelenskyy has said

Russian forces control most of the city but Ukrainian troops remain in a part of it, he said pic.twitter.com/YfUCdkeiNG

Russia and Ukraine have squared off at the UN over whether Russia’s offensive is to blame for rising food prices and hunger around the world.

Between them, the two countries account for nearly a third of global wheat and barley exports and millions of people in the Middle East, Africa and parts of Asia depend on them for affordable bread and noodles. Ukraine also is a major corn supplier and the biggest exporter of sunflower oil.

“As long as Russia persists in its efforts to invade Ukraine, the threat of hunger will be looming over many countries throughout the globe,” Ukrainian counsellor Natalia Mudrenko said at an informal UN Security Council meeting to discuss conflict and hunger.

Zelenskyy thanks US for $800M in military aid

Ukrainian President Volodymyr Zelenskyy has thanked the United States for the new package of $800 million in military aid, which he said was “just what we were waiting for.”

The latest military aid, announced by President Joe Biden, includes heavy artillery, ammunition and drones for the escalating battle in the Donbass region of eastern Ukraine.

“The occupiers continue to do everything possible to give themselves a reason to speak about at least some kind of victory,” Zelenskyy said in his nightly video address to the nation.