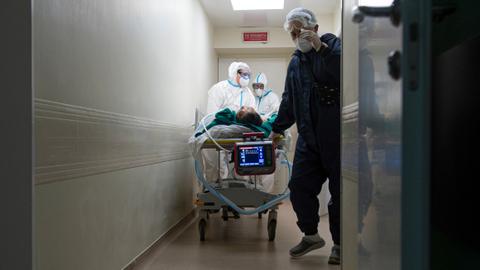 Covid-19 has infected more than 236M people and killed over 4.8M globally. Here are the virus-related developments for October 6:

Russia has reported 929 coronavirus-related deaths, the largest single-day death toll it has recorded since the pandemic began.

The government coronavirus task force also said it had recorded 25,133 new cases in the last 24 hours, a slight increase from a day earlier.

The Czech Republic has reported more than 1,000 new Covid-19 cases in one day for first the time since May 18, data from the health ministry showed.

On October 5, tests identified 1,108 new cases in the country of 10.7 million, the figures showed.

Czechs go to polls on October 8-9 to choose new deputies in the lower chamber of parliament.

Poland’s daily cases up by 70 percent past in week

Poland’s daily Covid-19 cases have risen by around 70 percent in the past week to over 2,000, a government official said, warning the country that a fourth wave of the outbreak is gathering pace.

Poland’s health service was stretched to its limits in the spring by a third wave of the pandemic that saw daily cases exceed 35,000, but authorities believe vaccinations will help control the number of infections this autumn.

“This is the last moment when we should get vaccinated, because the fourth wave is definitely accelerating, and in those regions where the number of vaccinated people is the lowest.”

Australian medical tech manufacturer Ellume has said that it had recalled almost 200,000 at-home Covid-19 tests in the United States over an increased chance of false positives.

Ellume’s rapid at-home coronavirus test last year became the first to receive emergency use authorisation in the US.

The US Food and Drug Administration issued an alert Tuesday over the “potential for false-positive results with certain lots of the Ellume Covid-19 Home Test, due to a recently identified manufacturing issue”.

Merck has announced a supply and purchase agreement that will provide Singapore with access to its experimental oral Covid-19 antiviral drug, the latest Asian country to try to snap up supplies.

Molnupiravir is designed to introduce errors into the genetic code of the virus and would be the first oral antiviral medication for Covid-19. Merck is seeking approval by the United States Food and Drug Administration for the pill.

Singapore’s health ministry did not immediately respond to a request for confirmation of the Merck agreement.

Australia has also bought the Merck pill, while Thailand, South Korea, Taiwan and Malaysia have been in talks to buy it. The Philippines hopes its trial of the pill would allow it access.

The rush to order the drug comes after data from interim clinical trials released on Friday indicated it could reduce by about 50 percent the likelihood of hospitalisation or death for patients at risk of severe disease from Covid-19.

South Korea will begin taking reservations for coronavirus vaccines from pregnant women this week as the country accelerates its inoculation drive to reach its goal for immunizing 80 percent of all adults by the end of the month.

Health authorities see pregnant mothers as key to the campaign and sought to drum up participation through public notices and news conferences saying they have a greater possibility of serious illness and death if infected with Covid-19.

Pregnant women are eligible to sign up for a shot starting Friday, for inoculation set to begin on October 18 using Pfizer or Moderna vaccines, according to the Korea Disease Control and Prevention Agency (KDCA).

Nicaragua to get 7 million doses of Cuban vaccine

Nicaragua has said that it will get 7 million doses of Cuban coronavirus vaccines over the next three months.

Vice President Rosario Murillo did not say whether Cuba is donating or selling the vaccines to Nicaragua.

Murillo, the wife of President Daniel Ortega, said the Cuban vaccines will be used to vaccinate children and youths between the ages of 2 and 17.

Murillo told local media the first 1.2 million doses of Cuba’s Abdala, Soberana and Soberana 2 vaccines should arrive in the third week of October, with another 3 million coming in November.

The bells of Washington DC’s National Cathedral rang out 700 times to commemorate the approximately 700,000 Americans who have died in the coronavirus pandemic.

As the bells tolled out the grim milestone in a pandemic that has killed over 4.8 million people worldwide since the start of the outbreak in March 2020, several people stood in silence in the cathedral courtyard to commemorate the dead.

According to the Centers for Disease Control and Prevention, 702,360 Americans had died as a result of Covid-19 as of October 4.

In June, the National Cathedral bells were rung 600 times to mark the previous milestone of 600,000 US deaths.

It has previously said that these numbers are likely significantly higher than those reported.

Brazil registered 20,528 new cases of the coronavirus and 677 Covid-19 deaths, according to data released by the Health Ministry.

In total, Brazil has suffered 598,829 deaths due to Covid-19 – the world’s second-highest toll after the United States.

New Zealand said that one person has died of the virus in an Auckland hospital, and 39 new cases were recorded.

The majority of the cases are in the biggest city Auckland but more infections are now being reported in the Waikato region, health authorities said.

The new cases take the total number in the current outbreak to 1,420.

New daily virus cases in Australia’s Victoria state fell on Wednesday but were not far off record levels as authorities look to start easing tough restrictions when vaccination rates increase.

A total of 1,420 new locally acquired cases were reported in Victoria, most of them in state capital Melbourne, down from a record 1,763 on Tuesday. Eleven new deaths were registered, the state’s highest daily number in the current outbreak.

Melbourne has been in lockdown since August 5 as Australia grapples with the third wave of infections fuelled by the fast-moving Delta variant that has also put millions in Sydney, its largest city, and the capital Canberra, under strict stay-home rules.

Most other states have zero or low cases.