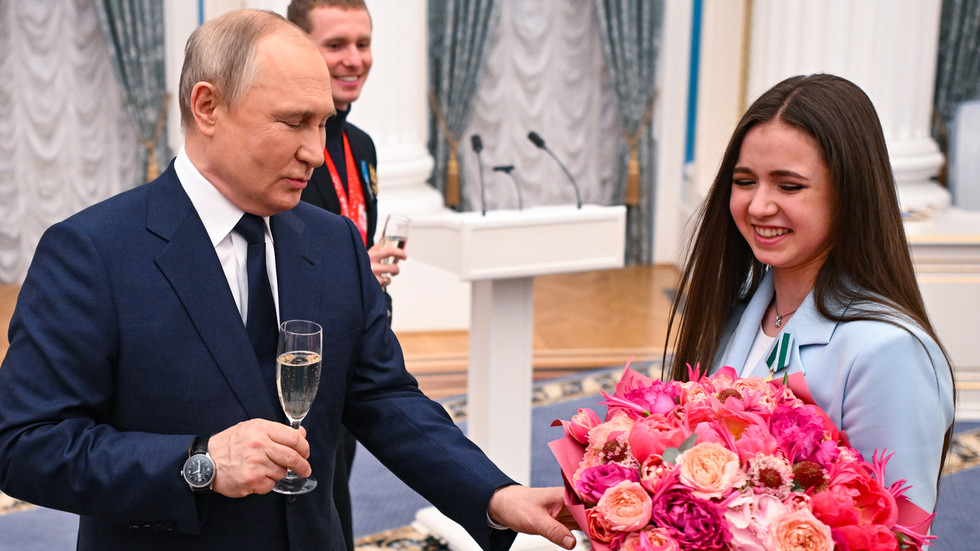 Then aged 15, Valieva helped Russia to gold in the figure skating team event at the Beijing 2022 Winter Olympics, before news emerged of a positive doping test result based on a sample from the Russian national championships taken back in December.

The youngster was cleared to compete in the women’s singles event in Beijing, but the controversy took a toll as the gold medal favorite ended a disappointing fourth, watching on as compatriot Anna Shcherbakova clinched gold and Russia’s Alexandra Trusova bagged silver.

Valieva’s doping sample contained traces of the banned substance trimetazidine used to treat angina, but was only reported positive by a World Anti-Doping Agency (WADA)-accredited laboratory in the Swedish capital Stockholm some six weeks later on February 8, after Valieva had starred in the team event in Beijing. Covid complications were subsequently cited as the reason for such a delay.

And while the Court of Arbitration for Sport (CAS) opted against upholding a ban for Valieva during the Winter Olympics, partly citing her protected person status, RUSADA is still investigating the case and has been given an August 8 deadline to reach a decision.

The medal ceremony for the team event, where the US finished second behind Russia, has still not been held after being postponed indefinitely in Beijing.

At a meeting with Russian Olympic Committee (ROC) medalists from the Beijing Games last week, President Putin defended the now 16-year-old Valieva and claimed that “such perfection cannot be achieved dishonestly,” which was taken as a reference to her doping case ordeal.


Pouncing on this, however, US Olympic official Hirshland has claimed that the Russian leader’s comments might hamper the investigation.

“You see news reports of Putin defending Valieva, and you question: ‘If he’s defending Valieva before the process has played itself out, how can you consider there to be integrity around the process?'” Hirshland remarked this week, while making calls for Russia to be sanctioned for its handling of the case.

Responding to those comments, RUSADA Director General Veronika Loginova insisted to Russian media that the organization is following WADA and international standard requirements to the letter.

“In its work, RUSADA strictly follows the provisions of regulatory documents – namely the requirements of the World Anti-Doping Code and international standard – which indicate the need for a confidential investigation,” Loginova told R-Sport.

Loginova emphasized that the provisions of the World Anti-Doping Code and the All-Russian Anti-Doping Rules require RUSADA, as a national anti-doping organization, “to conduct a mandatory investigation into athlete personnel in the event that an anti-doping rule violation is committed by a protected person.”

“We are conducting an investigation to identify all the circumstances of a possible anti-doping rule violation in the interests of a protected person, to identify persons involved in this violation (or exclude possible involvement), and to collect additional materials and evidence relevant to this case,” Loginva went on.


“I would like to repeat: please note that the athlete is a protected person and further comments on the investigation process not only violate the rights of the athlete, but also impede the conduct of the investigation, taking into account the principles of confidentiality and efficiency,” she concluded.

Though RUSADA reportedly has until August 8 to reach a decision, there have been suggestions that a final verdict might not be ready until next year.

Valieva’s team and Russian Olympic officials have consistently argued that she passed doping tests before and after the positive sample – including in Beijing.

During an emergency CAS hearing in the Chinese capital, Valieva’s team suggested that the positive result may have come from contamination from heart medication taken by her grandfather, with whom she often spends time.

Others have questioned why the result took so long to be reported, with WADA passing the buck to RUSADA and claiming that it should have flagged the test as a ‘priority’ case.

Issuing its initial verdict on the case, sports court CAS was critical of WADA’s role in the debacle, stating: “it should be possible for anti-doping laboratories and authorities to handle anti-doping tests in a swift manner when the samples are collected at significant pre-events that may constitute selection events for the Olympic Games, such as the Russian National Championships in figure skating.”