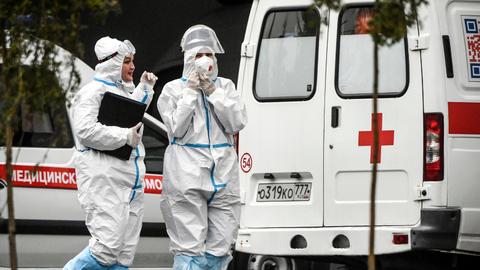 Covid-19 has infected more than 239M people and killed over 4.8M globally. Here are the virus-related developments for October 13:

Russia to test Covid-19 vaccine in form of nasal spray

Russia will test a nasal spray form of its Sputnik V vaccine against Covid-19 among adult volunteers, according to a state document, as the country struggles to rein in rising numbers of infections and deaths.

Russia was quick to develop and launch its Sputnik vaccine when the coronavirus pandemic struck last year, but take-up has been slow, with many Russians citing distrust of the authorities and fear of new medical products.

The nasal spray is to be applied in two doses in a clinic in St Petersburg, according to the document published on the state register of medicines, which did not provide the planned timing of the clinical tests.

President Vladimir Putin said on Tuesday Russia needed to speed up its vaccination campaign against Covid-19 as the country recorded its highest single-day death toll since the start of the pandemic.

Russian authorities said in June it a nasal spray vaccine suitable for children aged 8-12 had been tested and the plan was to launch the new product in September.

New South Wales could ease more
restrictions in Sydney a week earlier than planned on October 18 as
Australia’s most populous state races towards its 80 percent double-dose vaccination target, the government said.

The southeastern state is expected to hit the mark over the
weekend, beating forecasts, and officials previously promised to
relax further restrictions on vaccinated residents on the first
Monday after reaching that milestone.

“If we hit 80 percent, we’ve always said it will be the Monday
following,” state Premier Dominic Perrottet told ABC Radio on Wednesday.

“We
will have this discussion with our team on Thursday and we will
make a decision to be announced on Friday.”

Retail stores, pubs, and gyms can allow more vaccinated
patrons when inoculation reaches 80 percent. Mandatory masks will not
be required inside offices and nightclubs can reopen for seated
drinking, while weddings can have unlimited guests.

Sydney’s more than 5 million residents came out of a nearly
four-month lockdown on Monday after the 70 percent vaccination target
was reached, with state officials promising a phased easing of
remaining restrictions after vaccination rates reach 80 percent and 90 percent.

Mexico’s Health Ministry has reported 546 more deaths due to Covid-19, bringing the country’s overall number of fatalities to 282,773.

A US judge in Texas has temporarily restrained United Airlines from placing any employee on unpaid leave who receive religious exemptions from the company for Covid-19 vaccinations until October 26.

The Judge also temporarily restrained the airline from denying any late requests for religious or medical accommodations.