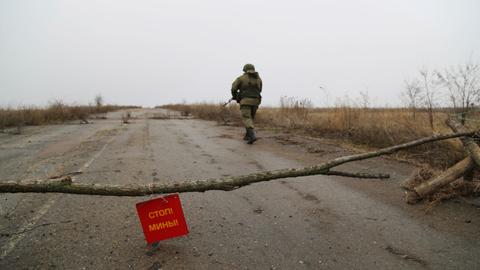 Moscow has rejected a series of proposals from Ukraine, deeming them “absolutely absurd”.

A push to agree to a new ceasefire in eastern Ukraine has broken down as tensions over a Russian troop buildup on the neighbouring border persisted.

Ukraine said late on Thursday that Moscow had rejected a series of its proposals, including prisoner swaps, reopening a checkpoint and expanding a joint communications centre.

“Unfortunately, all initiatives of the Ukrainian side were rejected by the Russian Federation under contrived pretexts,” Ukraine’s delegation to the Trilateral Contact Group (TCG) said.

The TCG includes Russia and the Organization for Security and Co-operation in Europe (OSCE).

Russia said that Kiev had submitted “absolutely absurd” proposals and accused it of imitating negotiations at the talks.

Moscow singled out a proposal to add Germany and France to the Joint Centre for Control and Coordination, a group tasked with implementing ceasefire agreements.

It was not clear if there would be new talks to try to get the ceasefire push back on track.

READ MORE:
No, Russia is not going to launch a mass invasion of Ukraine

Russia on Thursday kept up a barrage of hostile rhetoric towards Ukraine and compared the crisis there to the most dangerous moment of the Cold War as it waited for US President Joe Biden to invite it to possible talks with NATO countries.

After a videoconference with President Vladimir Putin on Tuesday, Biden said he is not considering sending US troops to defend Ukraine in response to the Russian military buildup on the country’s borders.

“That is not on the table,” he told reporters one day after the meeting.

Putin said that Moscow reserves the right to “defend its security.”

He has refused to say if Moscow plans on moving troops massing on Ukraine’s border but said that simply watching NATO move closer to Russia would amount to “criminal inaction.”

Putin told Biden on Tuesday that Moscow seeks legal guarantees from the West that Ukraine will not join NATO.

Ukraine accuses Russia of massing tens of thousands of troops in preparation for a possible large scale military offensive, raising fears that a simmering conflict in Ukraine’s eastern Donbass region could erupt into open war between the neighbours.

Ukraine’s ties with Russia collapsed in 2014 after Russia’s annexation of Crimea and Moscow-backed forces seized territory in eastern Ukraine that Kiev wants back.

Kiev says some 14,000 people have been killed in fighting since then.