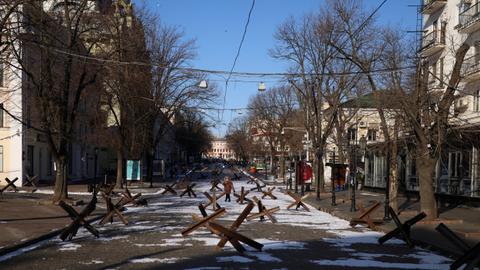 Russian forces withdraw from a strategic Black Sea island, potentially easing threat to vital port city of Odessa, but keep up their push to encircle last stronghold of Ukrainian resistance in Luhansk province, as fighting rolls into its 128th day.

Ten people have been killed in a missile strike on an apartment building in the southern Ukrainian region of Odessa, a local official announced.

“The number of dead in the apartment building missile strike has risen to 10,” said Odessa military administration spokesman Sergei Bratchuk, who added the missile had been fired by aircraft from the Black Sea.

Earlier reports said six people had died in the night-time incident, including three children. Reuters could not independently confirm details of the incident.

Ukrainian President Volodymyr Zelenskyy has said the launching of power transmissions to Romania was the start of a process that could help Europe reduce its dependence on Russian hydrocarbons.

Zelenskiyy’s comments in his nightly video message followed an announcement by Prime Minister Denys Shmyhal that exports had started earlier in the day –– with a volume of 100 megawatts –– four months into Russia’s offensive on Ukraine.

The president said the start of exports was “another significant step in our movement toward the European Union”.

“Thanks to Ukrainian electricity, a significant part of the Russian gas used by European consumers can be replaced. This is therefore not just a question of export earnings for us but a question of security for all of Europe,” he said. “Let me remind you that linking our country to the common EU energy system took place already after the war began. Ukraine is doing things now that once seemed impossible.”