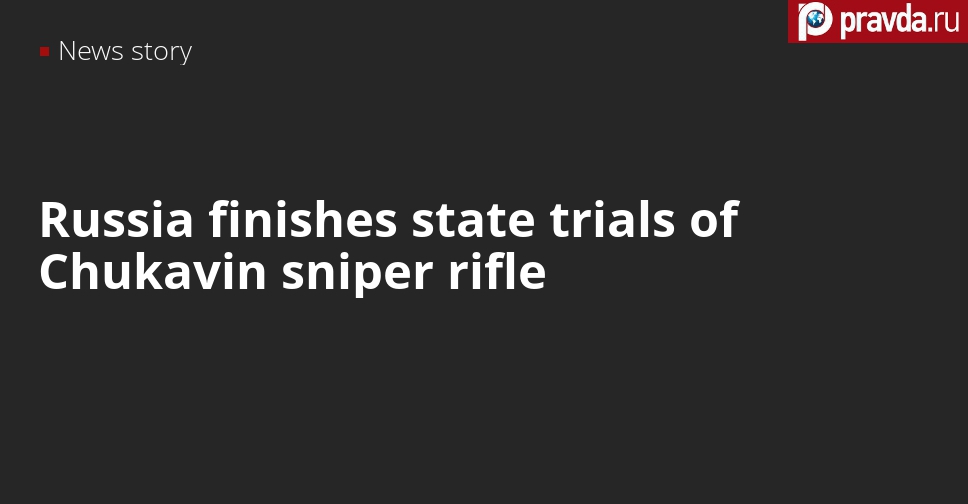 Russia has finished the state tests of the Chukavin sniper rifle, which is to replace the Dragunov sniper rifle (known for the Russian initials as SVD) in the troops.


“The state trials of the Chukavin sniper rifle, which will replace the Dragunov sniper rifle in the troops, have been completed with a positive result. At present, the results of the trials are being documented, and the decision to pass the new rifle complex into service will be made afterwards,” spokespeople for the Kalashnikov Concern said.


Earlier, the company said that the Chukavin sniper rifle (code-named “Reaper”) would be a new generation of rifles. It is said to ensure first-shot destruction of isolated targets at a distance of up to one kilometer.

The Dragunov sniper rifle, or SVD, remains the main sniper rifle in the Armed Forces of the Russian Federation. It was put into service back in 1963. This is a self-loading rifle that operates with cartridges 7.62 x 54mmR. It is reliable and easy to use, but the rifle no longer meets modern requirements in terms of the range of destruction of targets with one shot.


The Russian Armed Forces have been actively upgrading small arms during the recent years. AK-12 complexes come to replace Kalashnikov assault rifles. Pilots will be armed with PPK-20 submachine guns, whereas serial deliveries of the Udav pistol will kick off next year to replace the Makarov pistol.


Russia also continues the tests of the RPL-20 light machine gun. In addition, Kalashnikov works on the “smart” assault rifle that will use artificial intelligence to help shooters aim and shoot.